This blog post I wanted to mention a few items coming up over the next few months.  Here are some upcoming workshops:

=> The first will be at Mono Lake, CA, where I will be a guest lecturer for the Night Photography Festival on June 12-15, speaking on the 13th.

=> Andy Frazer and I will be hosting an LA Night Photography workshop the weekend of August 26-28.  We will shoot at various Los Angeles locations, learning about shooting at night in the urban environment, including getting access to an industrial area closed to the public.  This was a big hit last year when Andy and I did this workshop.

=> This October 7-9, Tim Baskerville and I will be leading a workshop at one of my favorite places–Death Valley.  It is a marvelous place to shoot, because of the remote area and lack of urban lights.  The fall has the best weather and it will be during the full moon.  For more details see this link.

The most significant news item is an upcoming international exhibit of my work on the Bay Bridge project shot in China in 2009 of the 4×5 views.  This is a group show on the bridge manufacturing at the prestigious Minsheng Art Museum in Shanghai where my work will be printed to 30×40 inches and larger.  I will be at the opening in Shanghai on July 10th.   Below, I will share and talk about some of the twilight and night images chosen by the museum curator for this exhibit. 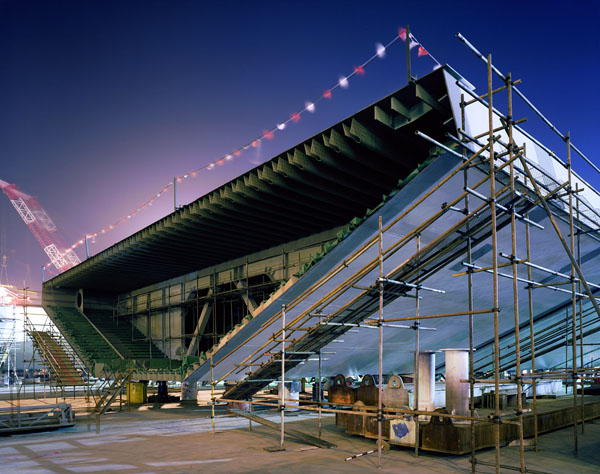 This image has become the iconic one of from the China series and was used as a postcard for promotion of a show of this work in Oakland, CA.  This shot was more difficult that it appears, because between the roadway section and the camera was a very heavily used roadway for equipment.  The exposure was 15 minutes, but it took almost a half  hour to make the shot, having to cover the lens as equipment drove by.  Their lights would have ruined the shot.  I also had to lower the camera a bit to avoid the bright lamp from showing over the top–and of course choose a location not to be in the way of the heavy equipment.  Note the movement of the crane on the left which was not noticed at the time I made the shot. 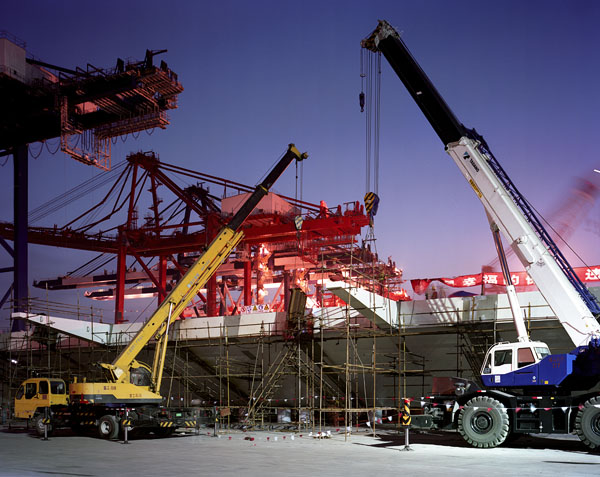 This shot was done at twilight of the roadbed.  The white sections jutting out from the roadbed will be the supports for the bike/pedestrian lane that will run between Oakland and Yerba Buena Island.  There is a green mercury vapor lamp high overhead on the left lighting the foreground.  The company that made the bridge roadway (and tower sections), ZPMC, on Changxing Island in the Yangtze River outside of Shanghai.  They also make 80% of the world’s shipping cranes like the red ones in the background.  There were dozens of these in various states of construction along the waterfront. 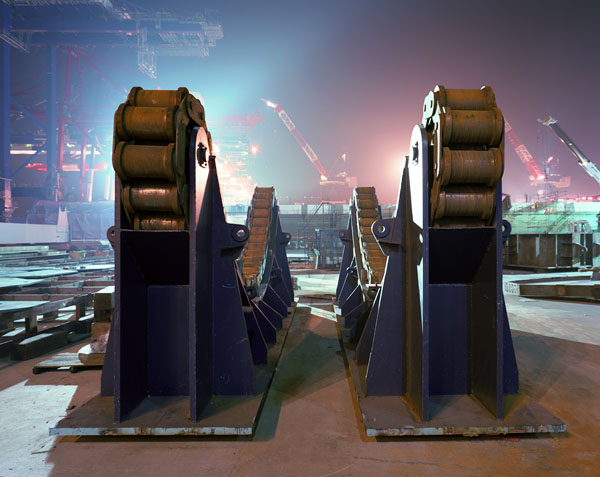 One of the most difficult problems of shooting in a very busy industrial environment like this is avoiding the bright working lamps.  They are almost everywhere for safety’s sake.  I had to find just the right position to block those very bright lights, while not getting in the way of workers.  Note the different light colors on the left (mercury vapor) and right (sodium vapor).  These huge rollers cradled the bridge tower sections so they could be turned for welding and other work.

It was surprising how much work the Chinese did each night.  Having worked in the trades on graveyard shifts myself many years ago, the efficiency is typically around a third of the day shift.  Not at this factory.  The Chinese have two 12-hour shifts per day and the night shift seems to get as much work done as the day. 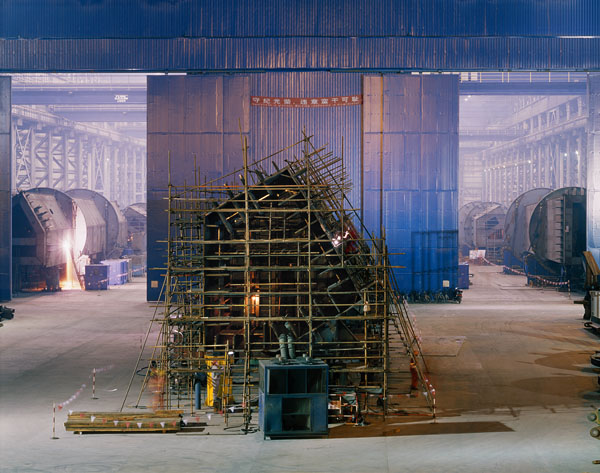 In this shot, you can see one of the vast buildings made just for this bridge project.   What you see here are several of the massive tower sections in various stages of manufacture.  This was shot during a break time, and you can (barely) see the lights of the inspector’s flashlights inspecting the welds, at center.  This was shot from a roadway section shown earlier.  The red banner across the center section says in both Chinese and English, “Regulations is Glorious, Working Recklessly is Disgraceful”.  The sentiment is there but the translation into English didn’t quite make it! 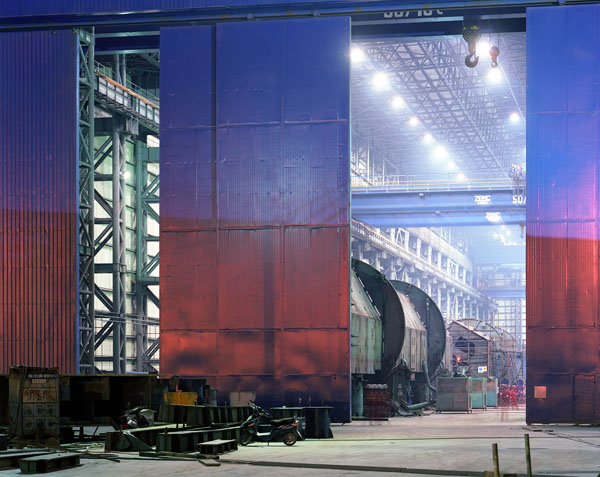 Here is a ground based view of same building above, but on a different evening.  Note how the sliding doors are open differently.  The overlapping lamps from both mercury vapor (on top) and sodium vapor (the red on the bottom) and the slight greenish cast on the interior of the structure make for some interesting colors.  Those doors are blue.  It is very hard to tell, but there is a subtle green rim lighting on the scooter in the lower center.  In industrial settings like this, you have to embrace the wild mixture of colors. 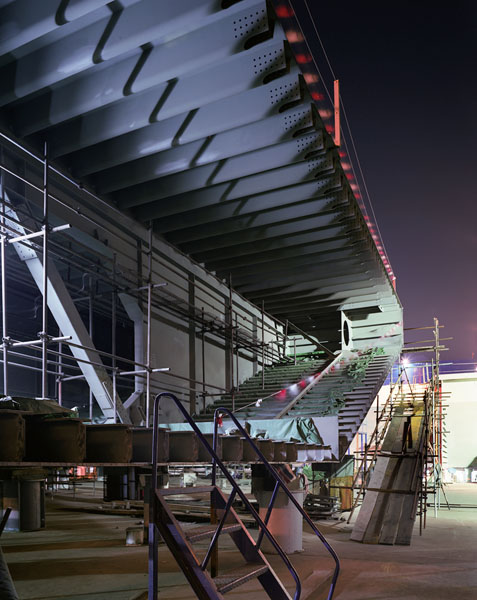 Here we see a different roadbed section.  The lighting from inside the structure is from fluorescent light tubes.  These cast a green light but I balanced them with the (similarly) green lamps of the overall mercury vapor lamps.  You can see a bit of red in the lower part of the image from the stray light of sodium vapor lamps.  To give a sense of scale, each of these roadbeds will handle 6 lanes of traffic across San Francisco Bay along with a bike/pedestrian lane attached to the south side of the westbound lanes.

On the 2009 Shanghai trip, I shot all day for 8 days and many nights, sometimes working 12+ hours per day, making about 100-4×5 views and thousands of digital images (more for documentation).  One of the problems about shooting at night, was that the last ferry off the island was two hours before sunset.  For 4 of the nights, I got a room at the company hotel for workers that was very spartan, but that enabled me to shoot as late as I wanted, one night until 2am.  That was no easy feat when I had started at 9am.  Also, I had to carry my 4×5 camera and lenses, tripod, and other equipment, including the digital camera gear for the long distances and climbing to get the best vantage points.  The ZPMC facility is so large that it has its own bus system.  On my last day in Shanghai, I bought a one hour foot massage for just a few dollars, and I sure did need it!

After the images were processed when I got back stateside, it all became worth it…