Lately, I’ve been a little lax about posting a new blog, as I have been very busy with commercial work.   Also, I was hoping to shoot and share some new work on the Bay Bridge construction project, but they are at the stage of tensioning the suspension cables to support the bridge itself, and no one except the most essential workers are allowed on the bridge deck or tower.

Last week I was in Portland, OR on personal business, and was looking forward to spending at least one evening shooting at night.  I decided to shoot in the industrial section on the east side of the Willamette River at the foot of the Fremont Bridge, for those who know Portland.  Being prepared for Portland, I brought rain protection gear for the camera, but this day was a record-breaker of 102 degrees!  Twilight was welcomed to cool things off a bit.

This twilight shot shows how lonely this part of town was after the day shift is over.  Being the summer, twilight was around 9pm. 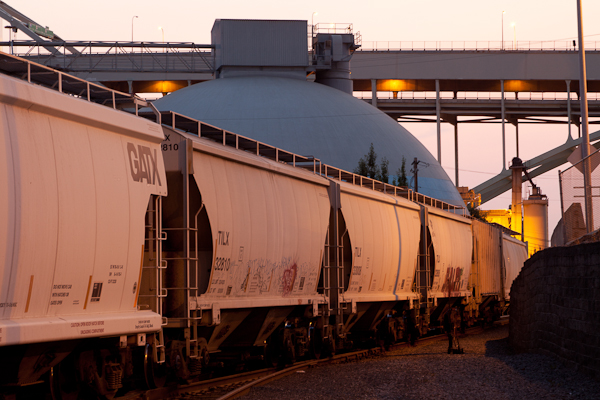 This area was open and unfenced–such a difference than Southern California.  The sodium vapor lamps are causing the reddish tint on the white rail cars.  The bright yellow lamps on the silos and the pale blue refrigerated hemispherical building made for an interesting mix of light. 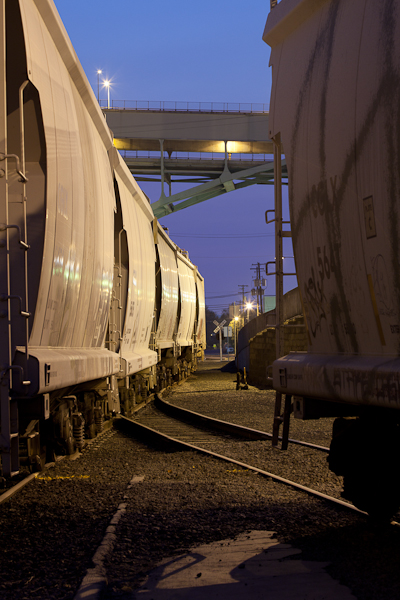 For this back-lit image, I hid the main street lamps behind the rail car on the right.  We are in the last minutes of twilight for this and the following shot.  For those technical folks, I set the color temperature to 3000 degrees Kelvin on my digital SLR, which is the setting I use for most urban night shots.  The final color can be adjusted at the computer, of course. 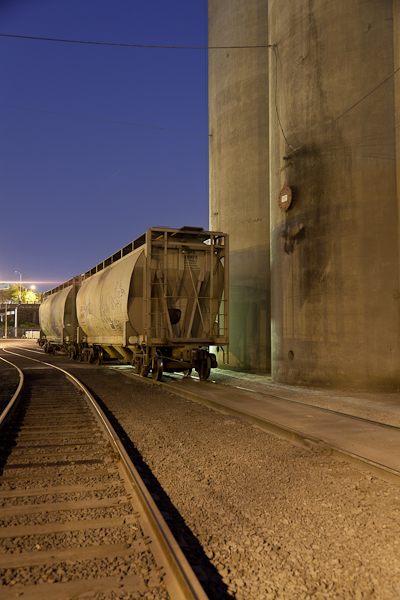 This is basically the reverse angle of the previous shot.  You can see the flatter lighting.  I did several variations of this shot, and chose the wider angle view, as it makes the rail cars less dominant and shows the setting and scale. 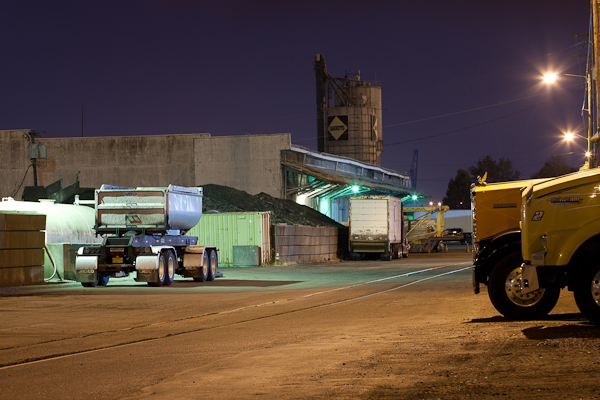 Moving on from the rail area, I drove a couple of blocks and saw this interesting mix of colors.  I was also fascinated how void the area was of people.  This image portrays that feeling.  The only people I saw the whole evening were a couple of homeless guys scavenging for scrap metal from trash bins. 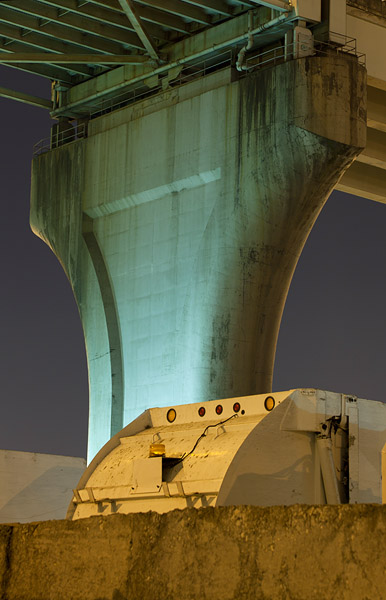 Here is a subtle image, with subjects as simple as a bridge support a wall and a garbage truck.  There were dozens of these trucks, but finding the right angle and location to make the shapes work took a few minutes to walk around a bit to study what was there.

One of the  things I was testing this trip was a new tripod/head combination that I recently purchased for a planned trip to Europe in the fall.  I’m not into plugging equipment, but this tripod is an extremely compact Benro with 5 leg segments, making it only about 19 inches long, with their small ball-head attached, yet it goes up to almost 6 feet (to the camera viewfinder).  To see more about the tripod, click here, and for the ball head, click here.  It is only about 4 pounds and also lies flat in the included padded case–perfect for travel.  The tripod is always the most difficult item for night photographers to travel with.  This tripod fits in my smallest suitcase, so sweat.  The above shot was a challenging one, as the full sized digital SLR and zoom lens for the vertical view is pushing the ball head to the limit.  A cable release is a must, as it was not the most solid set up, like I’m used to, but like anything, it is a compromise of size and weight from my other much bigger and heavier tripods. 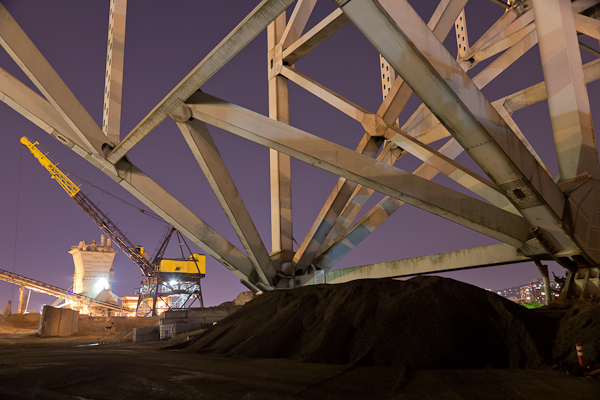 I was able to get right up to the foot of the Fremont Bridge, the longest spanned bridge in Oregon, opened in 1973.  You cannot begin to get this close to any bridge in CA on foot with a camera, not to mention NYC.  That is a cement plant in the background. 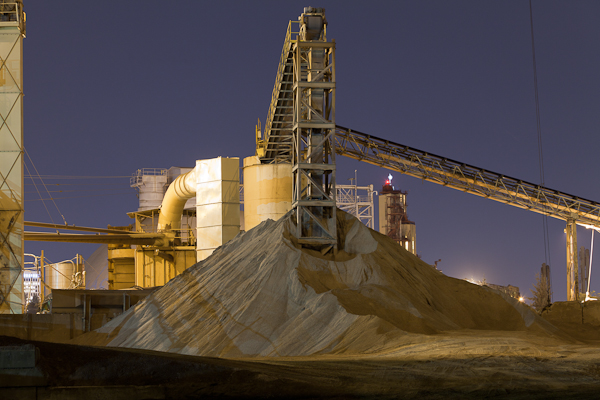 Here is that cement plant just to the left in the prior image.  Finding the right location as not to see any of the open lights was a challenge.  It was also much darker than it appears in this 2 minute exposure. 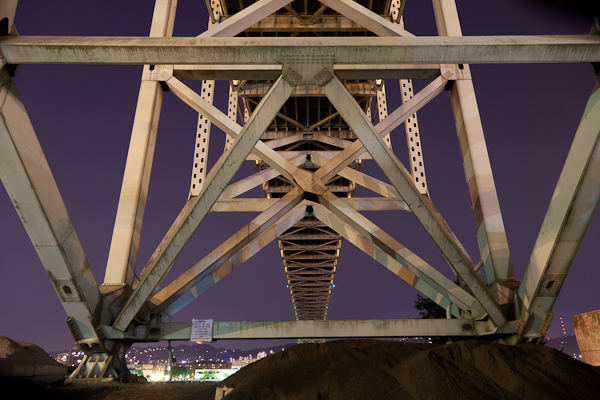 This straight-on shot of the Fremont Bridge was an obvious ‘bridge shot’, and is more difficult to shoot than it appears, as being just a foot either direction would make the horizontal  girders mis-aligned.  I shot this as a wider shot (16mm) but thought this less wide shot worked better (about 24mm). 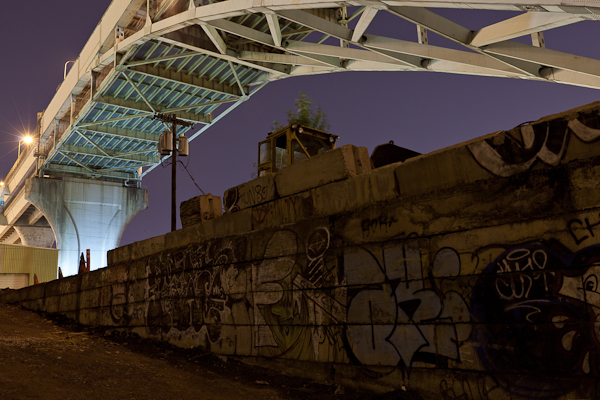 Getting away from the typical “straight-on” previous shot, I shot from a boat ramp.  Graffiti isn’t normally a photographic subject for me, but I like the texture that it gives to the wall in the foreground.  I underexposed this by a stop (half the light) as not to make it a shot about the graffiti and I also wanted to save the light on the bridge upright from being too bright. 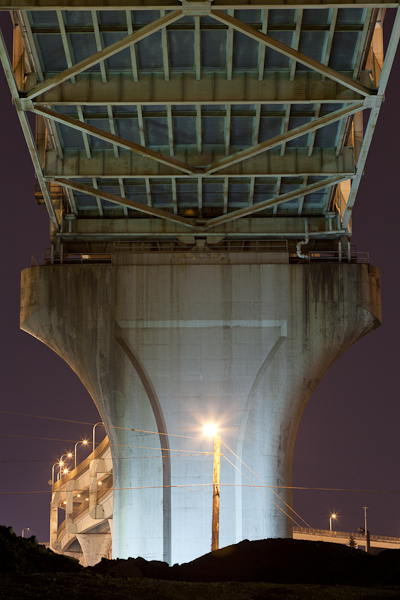 I wandered back under the Fremont Bridge and switched to a longer lens to shoot the bridge footing.  Removing the clear filter from the lens avoided the typical flare issue that single lamp would have created (no Photoshop work was needed, as this is a straight shot).  The silhouetted piles of sand in the foreground and the Interstate-405 approach ramps on the left give added dimension.

At this point it had been a long day, (and was still 88 degrees), and I noticed that the Widmer Brewery and pub (famous for their Hefeweizen beer) was a couple of blocks away.  On their website, you can see the silos on the right that I shot with the rail cars.  Having a couple of brews just before last call was just what was needed.  Portlanders do love their beer!