It’s been several months since I made a post, as I was in Spain last month.  As I process those images, I will post a selection of night images.

Just before I left, I shot again for two afternoons and evenings on the Bay Bridge.  It has been 4 months since I had been on the bridge, and the cables are now complete and supporting the bridge.

In this first shot taken from the tower, you can see that the suspender cables are now canted outward, pulling the main cable outward.  In this previous shot done in June, they were simply hanging down. 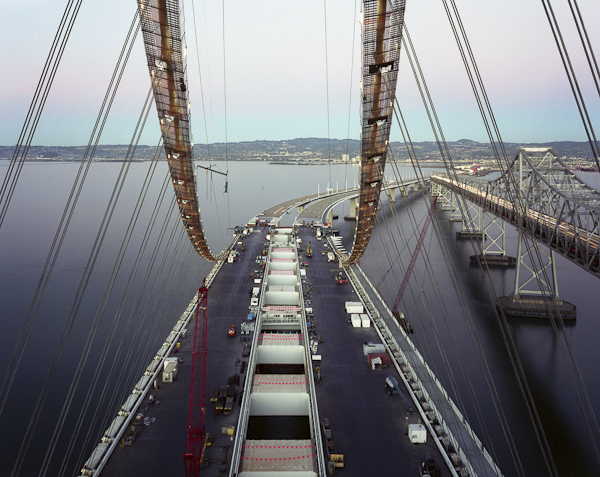 In this shot, I am using a different type of 4×5 film.  It gives a totally different look, and unfortunately is not made any longer.  It is also shot from the tower, with a longer lens, looking east. 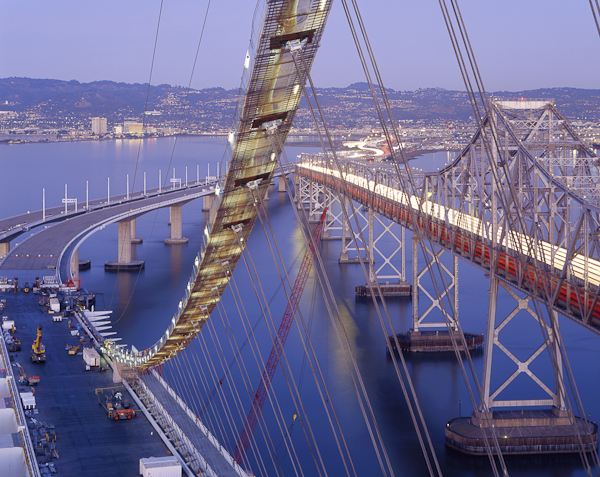 On this evening, the elevator operator left at 5 pm, so the only way down was by the rickety temporary construction stairway, but we had access for as long as the escort would stay.  The tower is 525 feet tall, making the descent a good work out.  One of the advantages is that I got into areas only accessible via the stairs.  This shot was taken from the stairway itself and was difficult to set up because of positioning the tripod on the different step heights, while trying to avoid seeing the stairway cross pieces.  Not to mention that the stairway is open and if I drop anything, it falls to oblivion.  Also, no one could move, as the rickety stairway would have blurred this 30 second exposure.  This view will be impossible to shoot in just a few months when all the scaffolding and staircases come down. 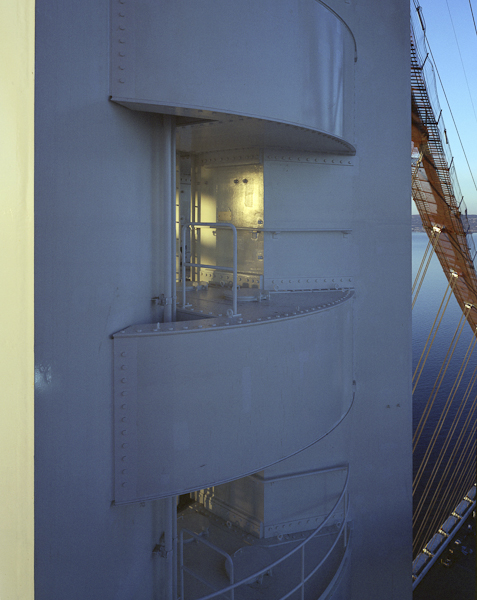 Access after hours is difficult, as the escort has to put in a very long day.  Many thanks to Paul for this night staying a couple of hours after sunset, and for helping me carry all the gear around and around the many stories of stairways.

In this shot, you can see the canted suspender cables pulling the main cable outward.  Traffic into San Francisco was very heavy, this being a Friday night.  Note the towers of the western bridge the other side of Yerba Buena Island. 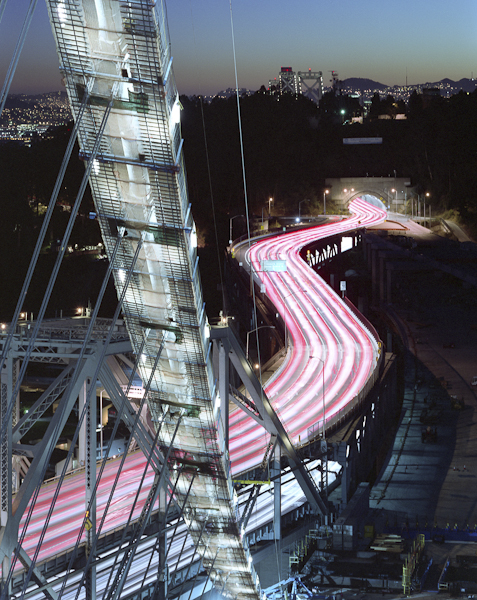 There is just a touch of light at the horizon in this view from mid-height on the tower, a location I have not been to.  You can see the Transamerica Pyramid on the left, Golden Gate Bridge on the right and left of center, Coit Tower, lit orange, as the Giants were playing the World Series that night. 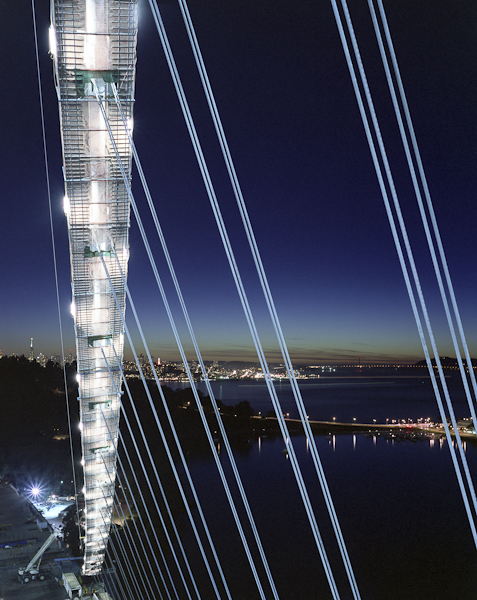 It is now fully nighttime, and I wanted to do an exposure that shows the structure of the tower itself.  I wanted to show the hundreds of  bolts on the tower and San Francisco in the background.  To get it all in focus, I had to do a 10 minute exposure.  Fortunately, it was not windy, and it worked well, on one sheet of film.  The play of light and shadows on tower itself and on the temporary floor.  The floor (which is simply steel mesh, with a view straight down through it) and the blue girder on the top are not permanent.  They call it “false-work” and they will be coming down before the bridge is open.  Again, this view will be impossible in a few months, especially for a long exposure like this. 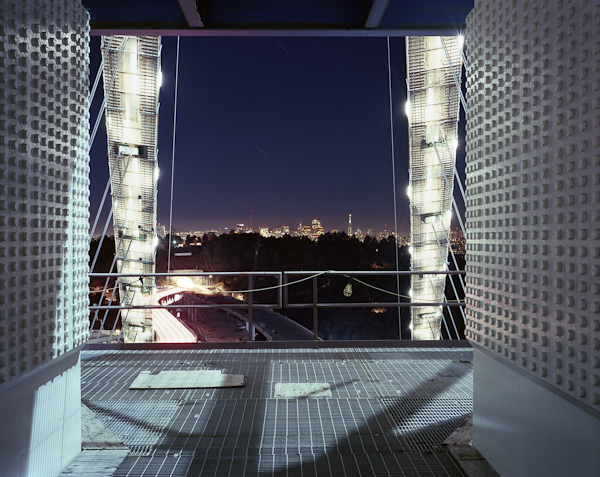 For a final shot that evening, I shot back down on the steel bridge deck.  What interested me was the lights left on in the shipping containers (now tool-rooms and shops) and their slightly open doors.  This was simply observed and wasn’t set it up.  The main light for the shot is coming from the main cable fluorescent catwalk lights, above.  I liked the way the suspender cables appear as blue in this light (they are actually gray).  The lights of Berkeley are in the background. 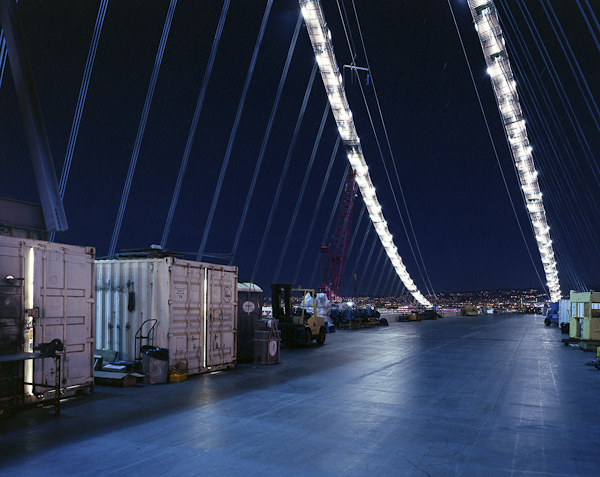 Here is one that really impressed me, shot by astronaut Don Pettit, and is very creative as it is technical in nature.  If I had this sort of access, this is how I would shoot.  Many thanks to Jill Waterman for sharing his work.

I didn’t know there was a museum to O. Winston Link, known for his steam train photos at night.  Looks like a great museum in Roanoke VA, if you’re in that area.  Thanks to Joan Gansky for this link.

And for the geeks out there, scientists have invented a camera and video that can capture in TRILLIONTHS of a second.  I’ve included this, as it makes one realize that light is what makes up most of our world as we experience it.  Night photographers are always studying the light from different sources and how they work together.  This new tool is helping us understand light better.  It is an 11 minute video and quite entertaining.  Thanks to Norm Palley for this link.