First, I want to mention there was an interview done with me for the Blend Images blog.  Have a read, as I discuss my night photography, the film-digital transition, among other things.  http://blog.blendimages.com/2013/01/08/blend-profile-tom-paiva/

In November, I spent a couple of weeks in Spain on holiday.  It was a magical trip.  Of course, I shot a lot of images, and would like to share a few of the twilight and night shots.  I flew into Barcelona to begin the trip. 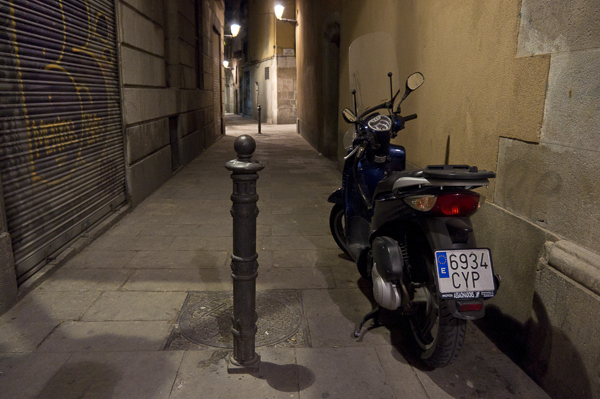 Being out at night is still my favorite time, be it at home or away.  In this shot on one of the many back alleys off the Las Ramblas old section.  The alley, graffiti and this scooter said “Spain” to me. 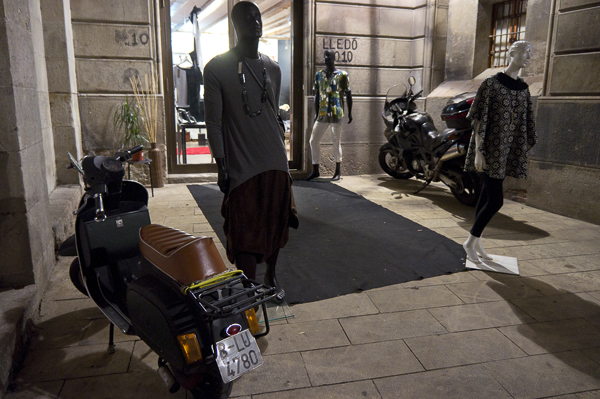 In what seems like a fashion shoot with models, is really three mannequins showing the hip clothes.  The scooters belong to customers.  All outdoors on a quiet side street. 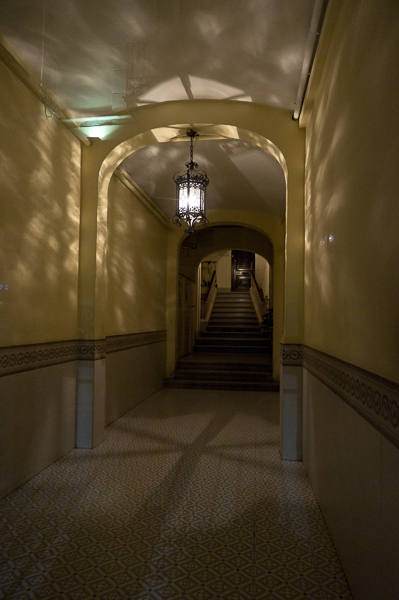 I love to simply wander around the quieter residential sections of cities at night and simply observe.  This is an entrance to an apartment building that had some interesting plays of light in the hall from the wrought iron lamp.  This was shot through the bars on the door, using it as a makeshift “tripod”. 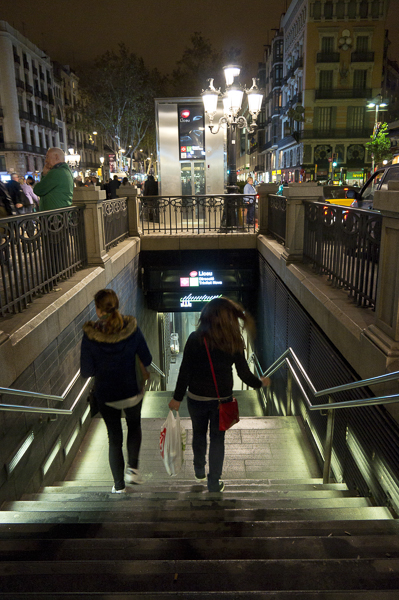 Here are a couple of young women going into the local subway station near my hotel.  When I’m shooting street scenes at night, I put the camera at a high ISO of 3200 and shoot at the maximum aperture with my Sony NEX-5.  This way, I’m able to grab the unaware subjects in mid-step.  No flash, of course.  This would have been very difficult to do in the film days. 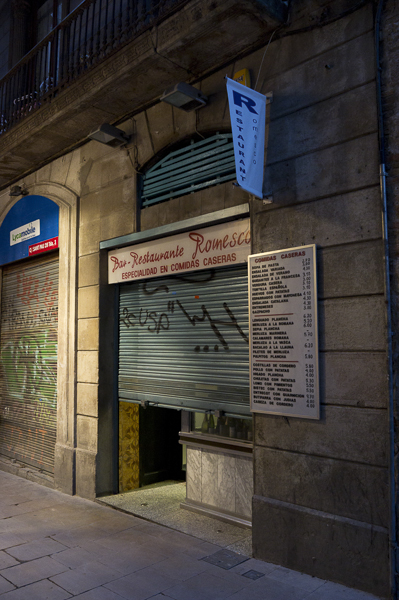 This is a twilight shot, but it’s a pre-dawn view–an unusual time for me to be shooting, as I’m not a morning person.  In this case we were taking a train for the day to Figueres, Salvador Dali’s hometown, and we needed coffee.  We were this merchant’s first customer of the day.  Note the touch of blue light on the ‘restaurant’ sign from first light of dawn. 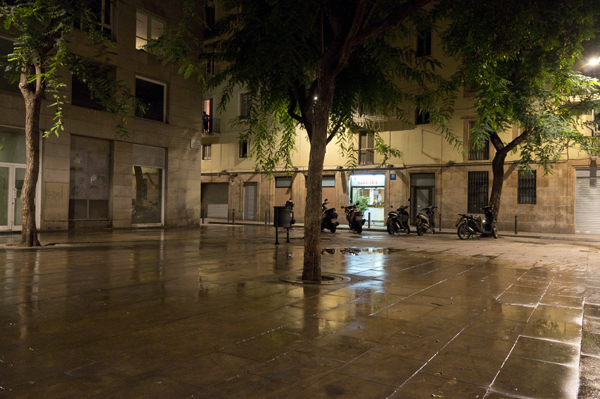 Yes, it rains on holiday, but I don’t let it stop me from shooting.  The reflections, especially at night, add to the interest and drama of the shot.  This quiet square, typical of Barcelona, ‘comes alive’ when it’s wet. 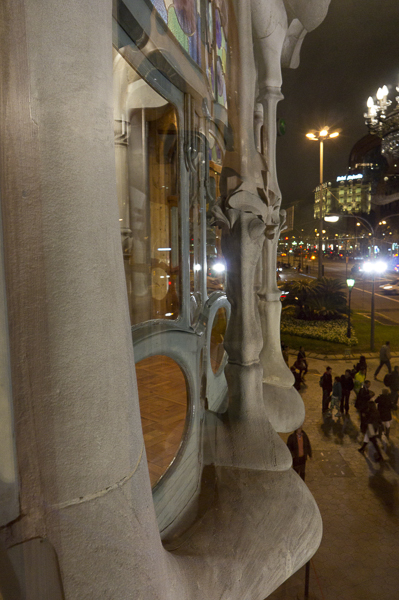 One of the famous signatures of Barcelona is the architecture of the early 20th century work of Antoni Gaudi.  This is the front facade of  Casa Batllo, shot from the interior at night.  I had studied his work in art school, but it never intrigued me as seeing his work in person.  He designed the buildings as well as virtually all the interior hardware and features.  I wound up touring 5 of his major structures, including his private residence.  His work influenced many architects and artists such as Frank Lloyd Wright, Walt Disney and even George Lucas, as he was inspired by La Pedrera’s chimneys to design the stormtrooper helmets in the Star Wars movie.  This shot was made by shooting from another window using the swinging rear monitor of the Sony camera.  It would have been near impossible otherwise, as I could not see the back of the camera or use a viewfinder (if it had one).

With the last of the light fading, I quickly went up on the roof of Casa Batllo to catch twilight as it was fading.  The interesting shapes, design and modern lighting all came together as I shot this series as quickly as I could.  These seven are part of the 30 I shot on the roof.  This first shot was the first made and the last less than 10 minutes later.  Note how the lighting changes so quickly at twilight. 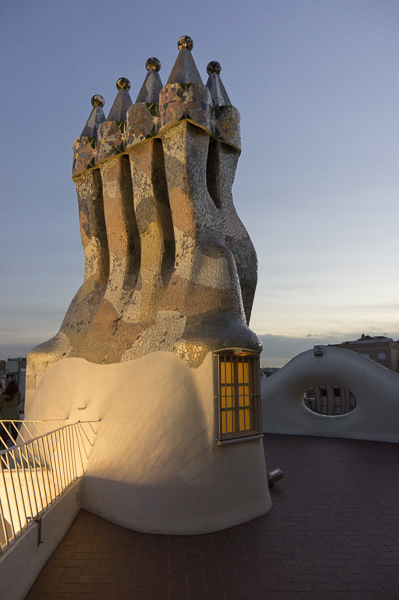 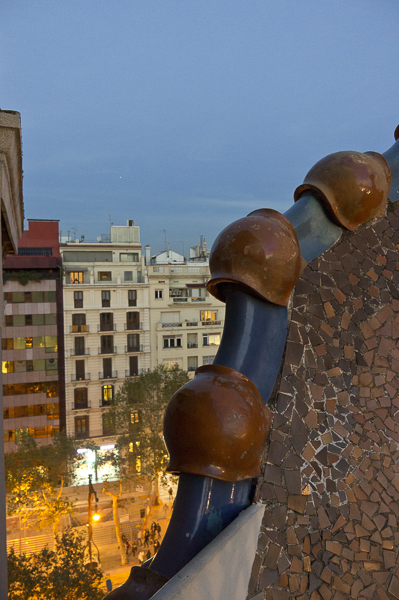 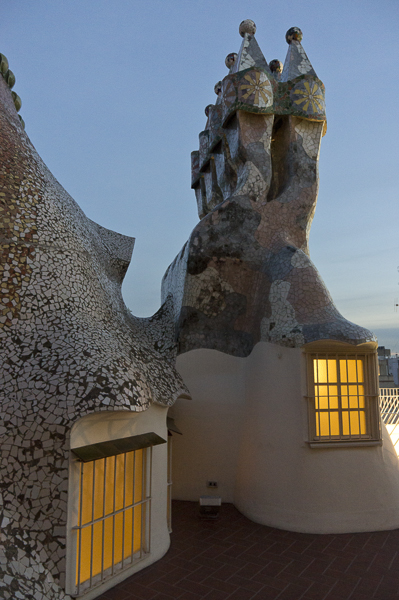 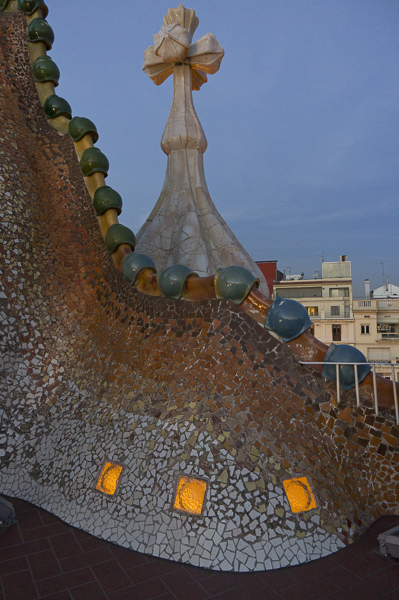 Compare the subtle light on the ‘cross’ with the three below.  The lights had just come on. 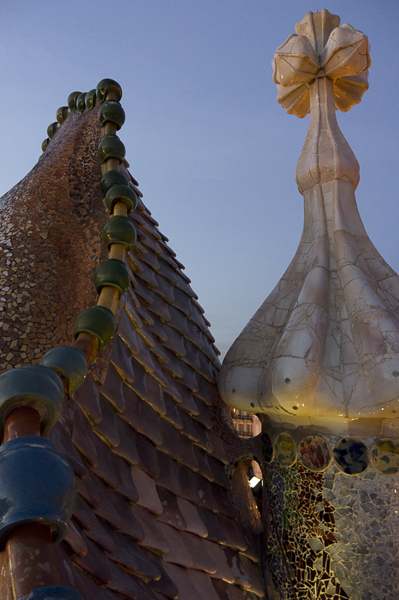 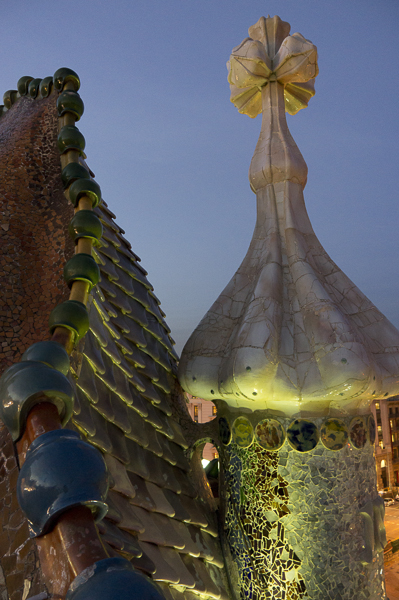 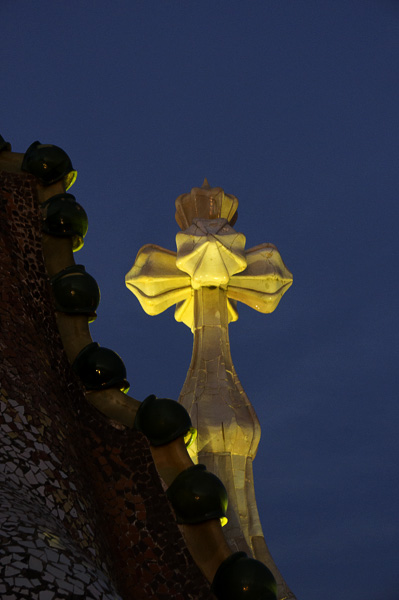 In this last of this series the sky is almost black.  The ‘cross’ has become too bright compared to the rest of the image.  Twilight is all but over and I went inside the building and shot over 200 views of the interior and details and spent over two hours inside.  What a fascinating building, indeed.  Here is the official Casa Bonllo website photo gallery for daytime and a few twilight views:  http://www.casabatllo.es/en/image-gallery/