Last week Lance Keimig, along with Scott Martin and Tim Baskerville held a Night Photography Festival at Mono Lake, CA in honor of the Nocturnes 20th anniversary.  It was a big success with warm balmy weather, making the night shooting that much more pleasant.  There was even an evening at Bodie, the California State Park ‘ghost town’.

There were 10 guest lecturers including Russel Brown from Adobe with all his great tips on processing night images in Photoshop.  My contributing lecture was talking about the how and why of using the large format camera at night.

The film I shot came out well, but I have not had time to scan it yet, so will share with you a few of the digital images I shot over two nights. 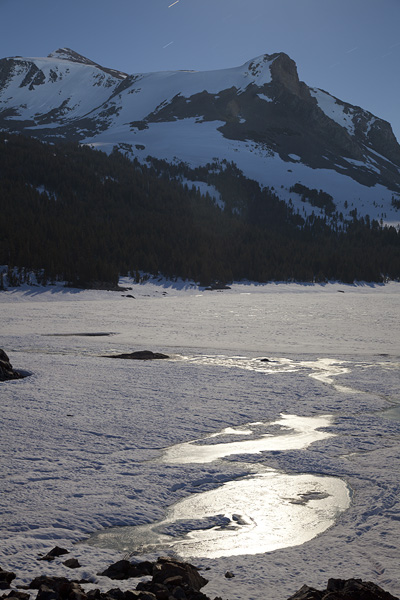 Andy Frazer, Jill Waterman and I drove up highway 120 towards the Yosemite entrance at nearly 10,000 feet (3000+ meters) in elevation.  Tioga Pass was still closed from the heavy winter due to snow and possible avalanches.  This shot is one of the semi-frozen lakes.  The reflection off the water is moonlight in this 8 minute exposure.  We scouted this location in the daytime and the temperature was in the mid-70s, but at night it dipped into the low 30s.  The lakes were melting quickly, as the night shots showed much more water than the day versions. 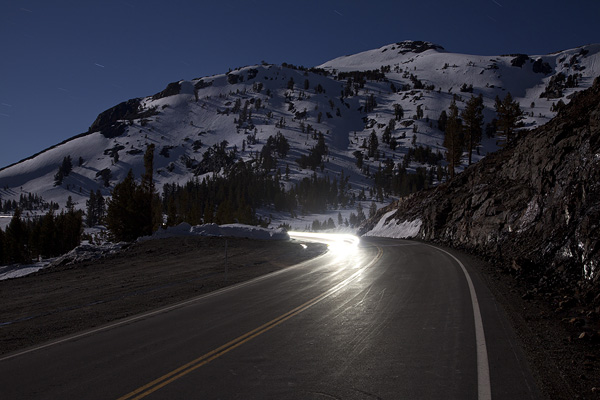 We were shooting about a quarter of a mile from where the road was closed, and just before this exposure was done, we all were surprised when a car came down from the pass.  I ran to the camera and stopped the exposure as it approached.  The headlights reflecting off the roadway and reflecting off the water running off the rocks on the right gave this image interest.  Without the car, this image would be weaker, but at the time, I thought he was ruining it! 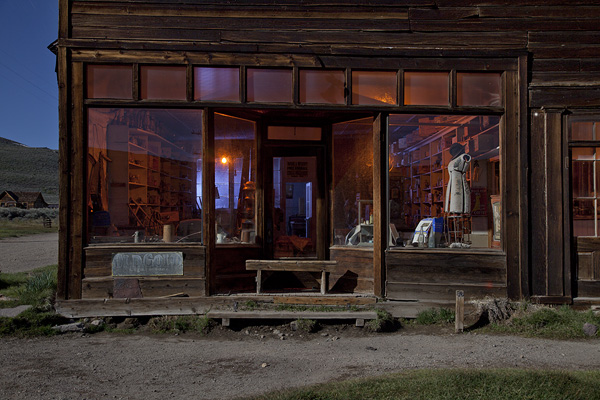 The following night, much of the group went to Bodie, one of the highlights of the festival. In this shot of a store, there were two very dim lights (maybe a few watts) hanging inside.  I positioned myself to hide one of them behind the post on the right.  I know this image would loose something in the dark back of the room, so I painted with light with an LED flashlight through a rear window on the left for about 90 seconds on this 4 minute exposure.  I feel the blue light adds a bit of “life” to the image and balances the warm glow in the interior. 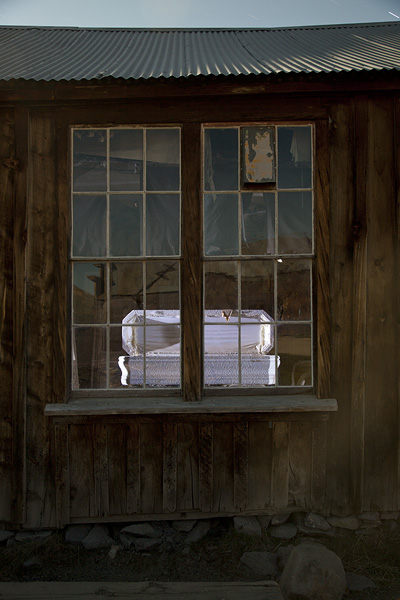 This is the side window of the funeral parlor at Bodie.  You could see the coffin inside, but it needed some light.  I went on either end of the building and painted with light for about 90 seconds on the left and an additional 30 seconds from the right to give the “modeling” effect on the coffin.  This side of the building was in deep shadow, so the exposure was 10 minutes to give some texture.  If you look closely, you can see the reflections of the other buildings in the windows lit by moonlight.  I carefully placed my camera in front of the wooden section between them so it would not show. 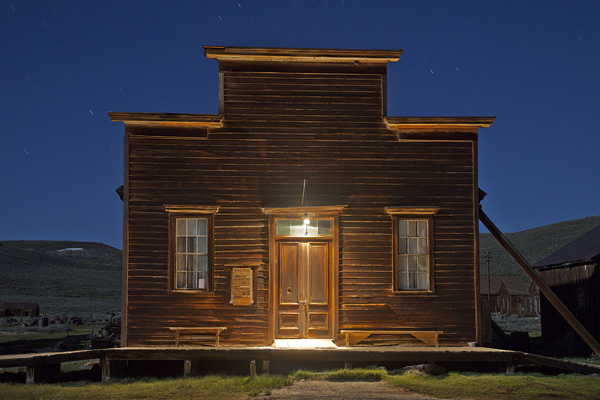 Virtually all of the buildings in town were dark, only lit by moonlight.  One exception was Bodie’s museum.  I am attracted to artificial light and how it interacts with the night scene.  If there was no light on this building, I wouldn’t have shot it, as there are dozens of buildings with no lights.  There was a lone light bulb over the door, giving some great contrast and texture of the false-front 1880s building, but very bright compared to the moonlight.  This is a combination of two exposures combined in Photoshop with masking to retain the detail on the door while still showing the night sky and moonlit background. 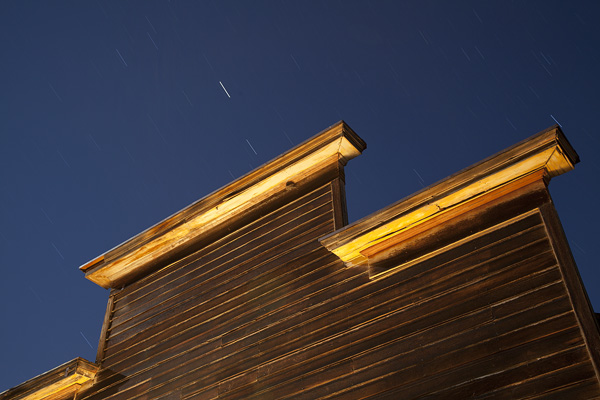 At this point, it was pushing 1:00am, our time to pack it in, as the ranger wanted to go home.  The museum building held my interest, and I did this more abstract image of the false-front lit by the spill light from the bare bulb over the door.  The warm glow contrasts with the moonlit night sky and star trails in this 6  minute exposure.

There were many images to be made in Bodie at night, but time was limited to about 4 1/2 hours, and we each had to work around the other 25 people and their tripods, flashes and flashlights.  There is a certain etiquette when shooting as a group at night, and most everyone respected each other’s space.

The workshop environment is one that educates, inspires and motivates, and this festival was no different.  I’m sure there were many good images made this week.

On the last blog post, I mentioned up-coming workshops, and forgot to mention the San Francisco workshop I will be doing with Tim Baskerville on September 9-11.  For more information, see the website or contact me via email.