In the last blog post, I showed three images from Bodie that were taken late in the evening (after 10pm)—out of the five set ups I shot. The reason for doing so few views was that the digital camera was busy from twilight until almost 10 pm that evening doing a time-lapse sequence. Here is a video version made from the approximately 400 individual images looking south on Green Street.

View this at full size, and you can see all the different night photographers popping flash strobes and using flashlights to paint with light like I did with the “Coffin” shot in the last blog post.  The images were shot 20 seconds apart and are being viewed at 12 images per second.  It is ironic that a park ranger picked this evening to move into his new digs (hence the U-Haul trailer).  At the time, it looked like he was ruining the shot, but actually, it adds interest and gives more to observe (as he unloads the trailer).  You can watch the full moon rise and the light change from twilight through the “blue hour” to darkness and see the shadows and stars move with the moon.  If you look closely, you can see the space station quickly arc across the sky.

The guy with the silver “bag” over his head in the early frames is me making one of my 4×5 views while the digital camera was doing its thing.   I did five twilight/night views with the 4×5 that evening and here are four of them. 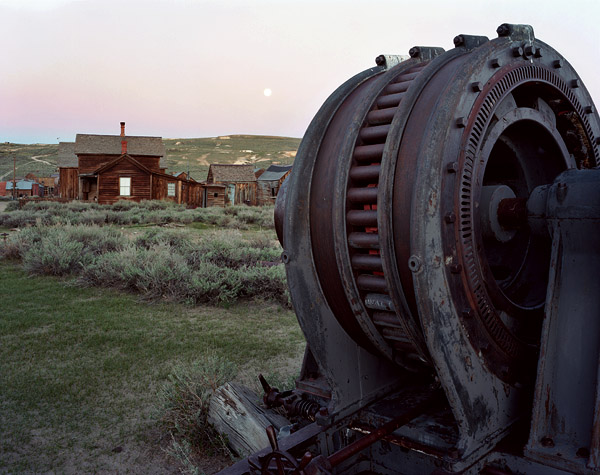 The immensity of this generator intrigued me as it was about 8 feet high.  The contrast of the weathered buildings behind with the bright light of the setting sun behind me reflecting off the window adds interest.  For those in the know, I swung the front standard of the 4×5 to keep things in focus. The rising full moon with the afterglow of sunset gives a bit of warmth to this image.   Even this time of year (the summer solstice full moon), the bleakness of the area and chill at night makes you appreciate the ruggedness of the people who lived here. 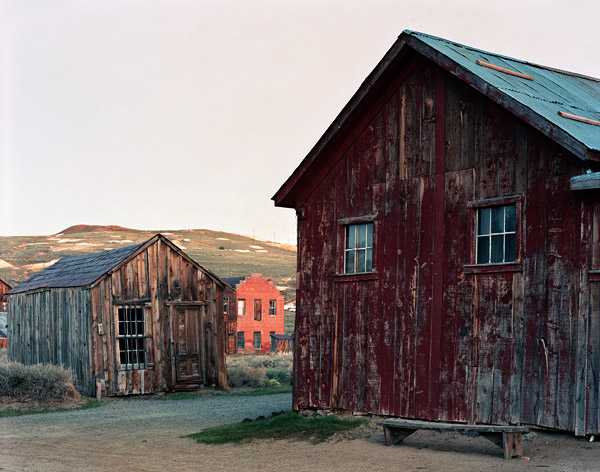 Here we have a classic Bodie view that shows the weathered texture of the 1880s ghost town.  Twilight really saturates the subtle colors.  It is darker than this image tells us, as this is a one minute exposure.  It is probably difficult to tell, but there is a subtle purple-pink color in the twilight sky.  Yes, those are patches of snow (in mid-June) in the background, as Bodie is over 8000 feet in elevation. 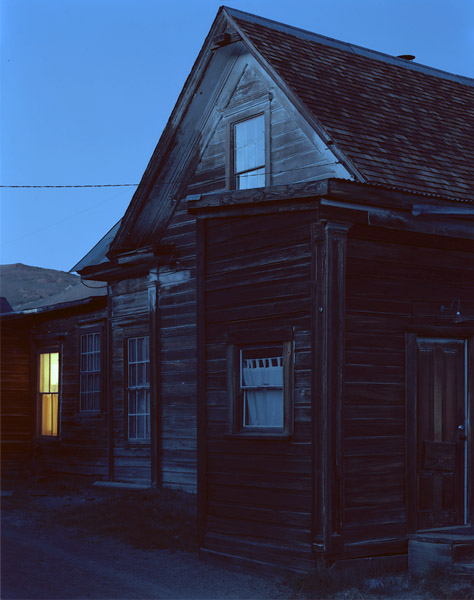 Being the urban guy, I was attracted to one of the few lights (from a park ranger’s quarters) in this “ghost town” as it adds life to the bleak deep blue darkness.  If you cover up the lit window with your hand, you can see this would be a much weaker image. This is a 10 minute exposure at the tail end of the fading light.  There was an intense blue light at the beginning and it was totally dark by the end of the exposure.  That blue intensity adds to that late evening feeling.  If you look closely, you can see a red glow on the weathered wood on the far left from the lit window.  This is the shot I was making during the time-lapse video. 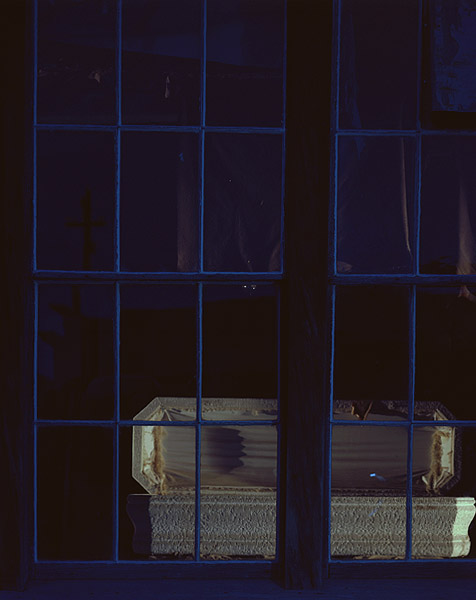 In the last blog, I did a shot of the coffin through this window with the digital camera, painting with light from the side windows on either side (see it here).  After doing that shot, I decided to do one more 4×5 view.  Another night shooter, Chip, was shooting close-in from the window on the right.  Using my best “night photography group etiquette,” I cropped tightly, as not to bother, or see him or his camera (and to stay out of the way of his exposure, too).  The lens was covered during his painting with light.  The light on the coffin was guessed with the help of ‘chimp’ screen from the digital view made earlier.  I figured about 20-30 minutes were needed to try and get some detail on the window frame from from the full moon spill (this side of the building was in deep shadow from the moonlight).  It ended up being a 25 minute exposure.

What I really like about this shot is the rich tones and textures which I hope you can see on your monitor.  The mystery of this image draws you in to see deep inside the funeral parlor.  There is a lot of subtle detail in this image.  The blue tones on the wooden window frame and caulking were more colorful than expected but really added to the mood and contrast.  Very little Photoshop work was done on this image other than basic color balance and density correction.  This is so different from the digital image and is a good case on why I still shoot film—for that unexpected “different” look.

This post has gone live a bit early, because I leave Saturday for the show opening in Shanghai, China, and will be gone for almost three weeks.  I won’t be doing a blog post until I return, but will be checking email, so comments are always welcome.  When I get back I’m sure there will be many interesting experiences to share…