Last month, it was time to revisit the Bay Bridge and to see how far the project has progressed.  This visit was about the stringing of the “suspenders”, which are the cables that hang from the main cables that will support the bridge roadway from above.  At this point, the end of June, all of the suspenders have been connected to the main cables.  Since these cables will be canted out to connect with the outside edge of the roadway, I knew that the free hanging of the cables was a very short window in time. 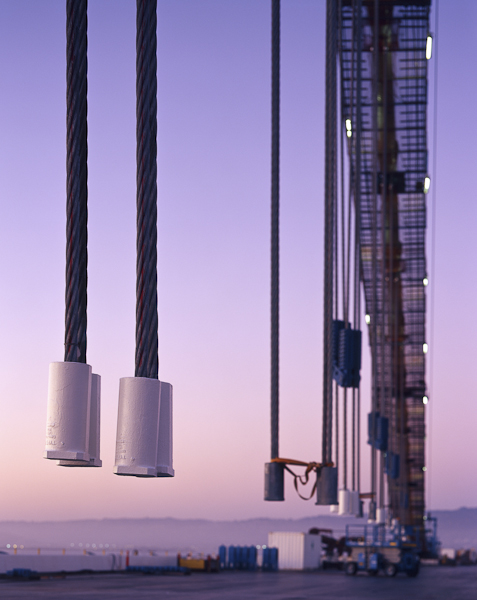 From the steel roadbed, you can see the free-handing suspender cables in this narrow-focus twilight shot.  There was a bit of wind both nights I shot, and there was noticeable movement in the hanging cables for exposures longer than a few seconds. 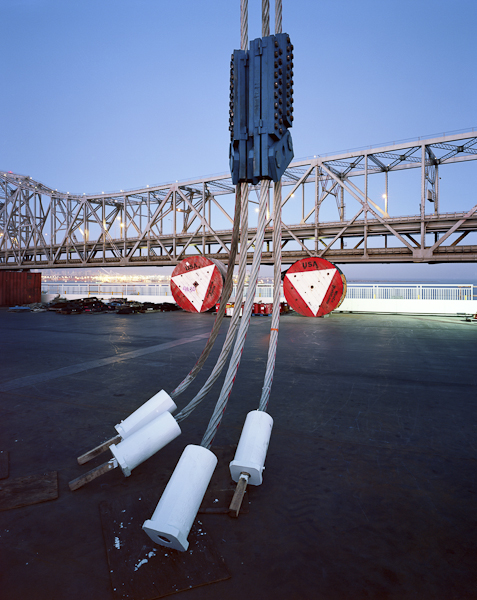 The engineering design of the cables called for longer cables towards the tower than the cables towards the anchorage at the roadbed.  It was puzzling at first, until the escorting Caltrans engineer explained it to me and the Metropolitan Transit Commission escort that the the main cables will be “pulled outward” by the suspenders.  Confusing?  Sure, as it was to me but when you see the final renderings, it makes sense.  The Bay Bridge website is a very thorough and comprehensive one:  http://baybridgeinfo.org/ .   Be sure to have some time when you peruse this site.  Here a grouping of four cables has just had the end pieces painted.  In the background are two cable spools, the existing bridge and the lights of the Port of Oakland. 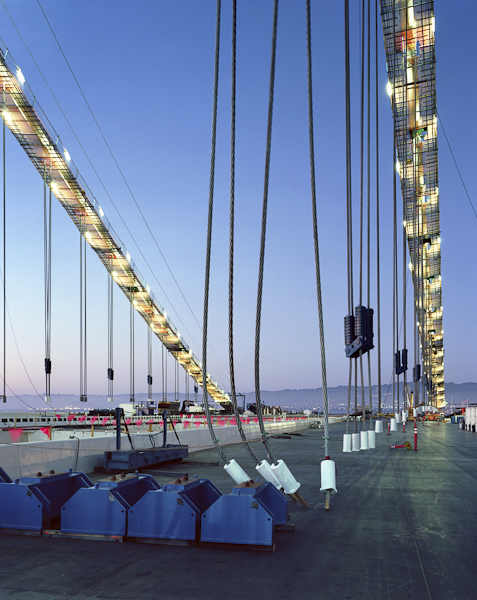 In this view you can see the longer suspender cables touching the roadbed in the foreground, with the progressively shorter ones towards the roadbed anchorage.  The glow from the light fixtures on the main cable catwalks gave a nice glow on the bridge, especially at night. 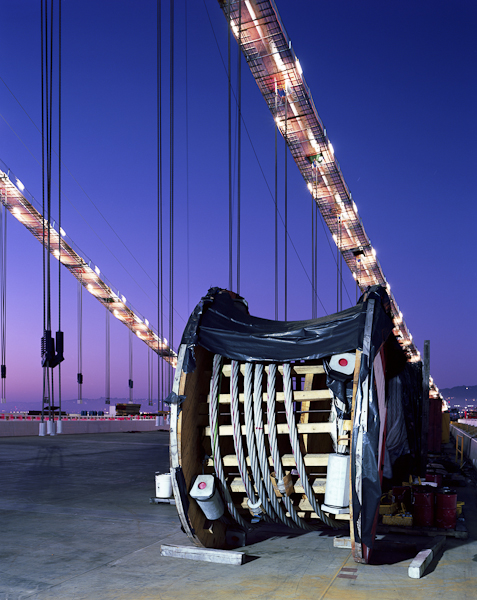 There was a mercury vapor light on this cable spool that added some interest (otherwise, it would have been a dark as on the right.  There were several spools of “leftover” cable on the roadbed–”just in case”. 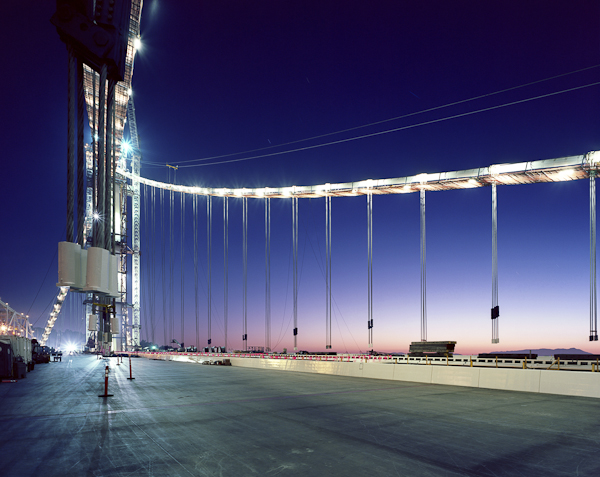 This very wide shot was made with the last of the light of the setting sun at 930pm, since were were shooting within a day of the summer solstice–the longest day of the year.  Positioning the camera to block as many of the brightest lamps gave more of a sense of mystery.  You can see the moving suspender cables in the wind in this 2 minute exposure. 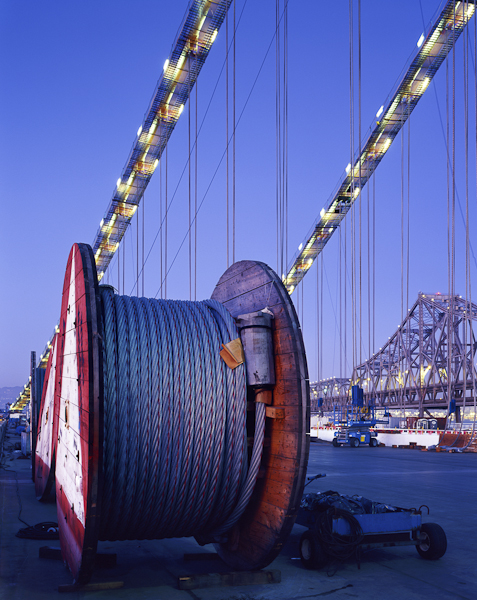 This spool had quite a bit of cable left.  The slight green cast on the top of the cable spool contrasting with the slight magenta cast on the lower portion was a nice surprise.  I didn’t see this subtlety at the time of the exposure and is one of the advantages of shooting transparency film at twilight, as it picks up many color nuances. 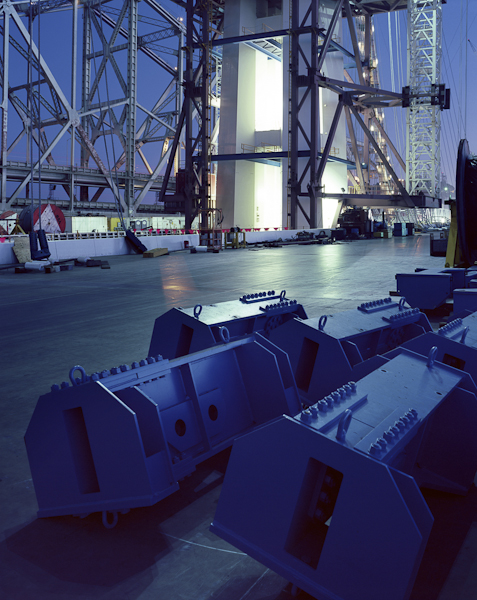 The items in the foreground are called Load Transfer Brackets.  All of the blue pieces (in this and the other images) are for construction and not part of the final bridge.  The back-lighting of the light within the tower, mixed with the last of the twilight gives an interesting glow to this otherwise, documentary shot. 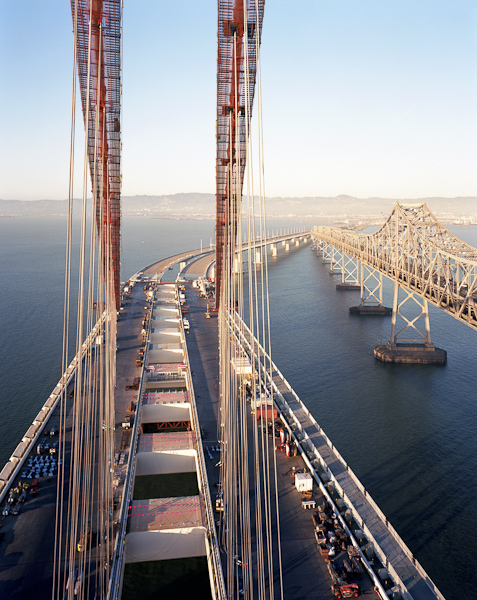 This visit, I did get access to the tower again and wanted to share at least one late afternoon image to show how the suspender cables are hanging nearly vertically.  If you look on the left, you can see small white bits which are the anchors for the suspender cables, pulling the cables outward.  Due to the scheduling of the workers, including the elevator operator, I only had about a half hour on the tower this visit but worked quickly and got quite a few 4×5 views.  Shooting at twilight in the summer is difficult because of the late sunset.  Here we are looking east, with the Berkeley hills in the background and the existing bridge on the right.  Note the pedestrian/bike lane on the right that will run from Oakland to Yerba Buena Island.

This project is coming along quickly and is on schedule.  The bridge will be open to traffic Labor Day weekend of next year, less than 15 months away.

On another note about night photography, recently I watched an old “film noire” black and white suspense movie, “Night and the City” from 1950, directed by Jules Dassin, starring Richard Widmark, Gene Tierney, and Googie Withers (you’ve got to love her name).  It had some quite spectacular night cinematography, more so than any film of this era I’ve seen.  The story line was so-so and typical, but worth watching for the urban night chase scenes.  I’ve googled the movie and noticed that it is on Turner Classic Movies this Friday morning, July 15th, for those with cable TV and a DVR.  It’s also available on Netflix and is definitely worth a watch.