One of the best parts of traveling is visiting friends and getting a chance to shoot new locations with the “localers”.  When photographer friends come to California, I usually take them to interesting locations, based on what they want to shoot.

This past trip to NY/NJ was no exemption.  I had the chance to shoot in the Meadowlands area of NJ, which, as the name implies,  is a natural grassland.  Today, it has its rivers, where there are powerplants, warehouses, factories and numerous bridges dotting the area.  One of my favorite photographers, George Tice, has been shooting in NJ for most of his career and is still shooting in 8×10 B+W, now into his 70s.  Much of his work are twilight and night shots and “Petit’s Mobil Station” in particular, is iconic.  Viewing a platinum/palladium or silver print of this image is the only way to really enjoy it, as the tones in the shadows are so subtle.

As most of you know, the industrial landscape has been a photographic passion of mine for many years, and NJ has plenty to shoot!  Here are some images shot in the Jersey City–Meadowlands area. 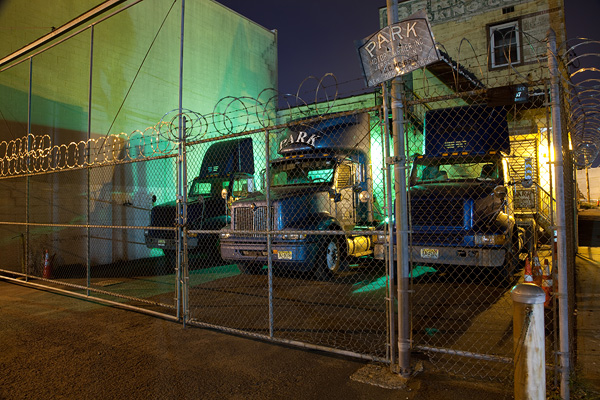 These three trucks caught my eye in Jersey City.  The combination of the mercury vapor (green) and sodium vapor (yellow) lamps is a fun mix.  Finding the right position to block the light fixtures, and shade the bright lamp reflecting off the razor wire on the left was a challenge, too.  This is a one minute exposure and I balanced the color to make the fence poles gray. 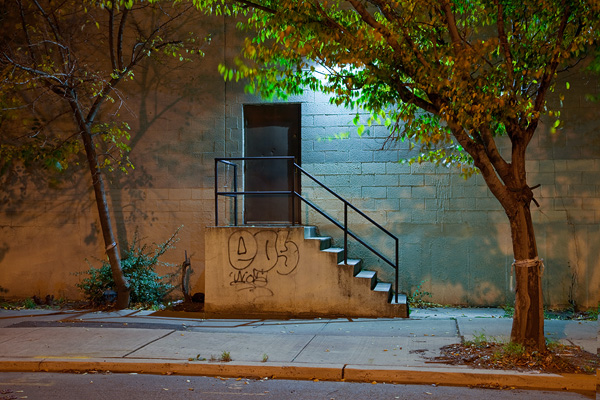 This seemingly simple shot of the warehouse back door and stairway, was more of a challenge to shoot because I had to move precisely to block the intense mercury vapor (MV) lamp behind the leaves.  I knew the blue/green color would make the tree’s  leaves more green that they were.  The red cast on the left wall and curb are from a sodium vapor (SV) lamp in the street and I had to shield that lamp from flare.  Other than the mixed lighting, what caught my interest was the two trees leaning left, echoing the railing on the stairs.  I was also standing in the middle of the street, but at this time of night, there were few people around. 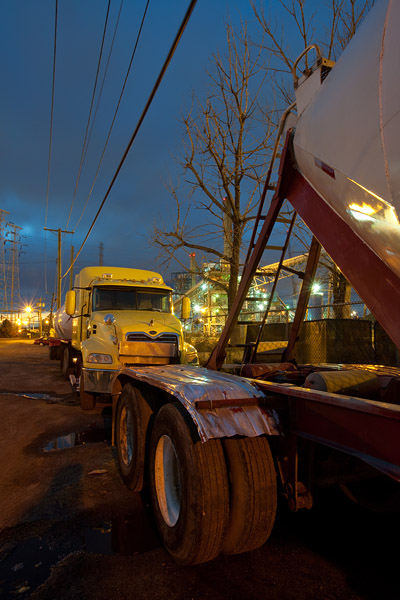 These trucks in Jersey City are parked next to a power plant.  This heavily industrial area was a challenge to shoot because I had to “hide” the brightest lamps of the plant with the trees, and parts of the truck.  I think the reflections off the trucks make this twilight shot.  To cut down on the yellow cast of the SV street lamps, I set the color balance to “K” for degrees Kelvin and set it at 3300 degrees.  This got rid of much of the overall yellow cast typical for urban night shots.  That truck in the middle is, indeed, yellow. 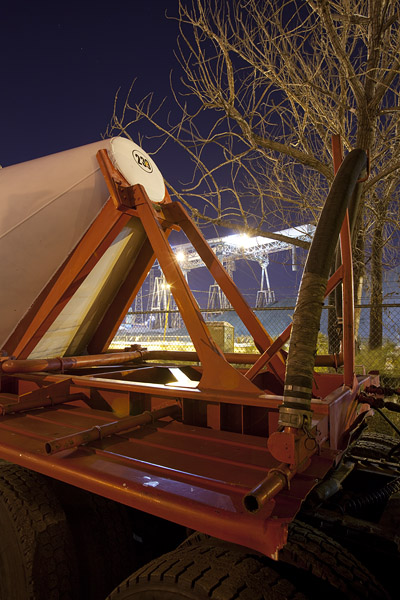 For this shot, the color balance is still set at 3300K, otherwise the white tank would be yellow from the SV street lamps.  Hiding the lamps of the plant was a challenge again, but I think this is acceptable, considering how many bright lights there were.  The contrast of side light on bare tree gives more interest, too. 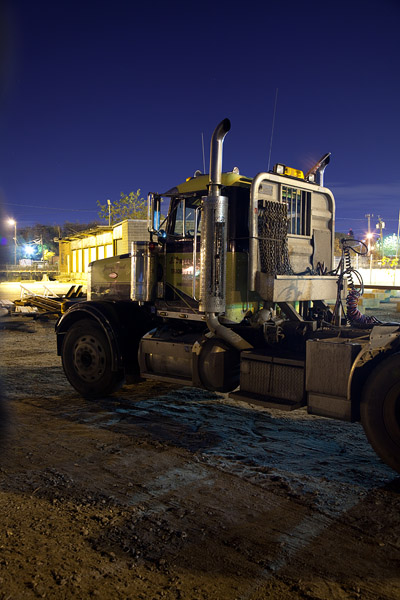 This dirty truck was gray and the 2800K balance shows the way I saw it.  I shot this because I liked the brighter lights in the background and the light coming beneath the truck on the ground.  I let the background be a bit overexposed to get details in the shadows of the truck.  It blocks the brightest lamps and I carefully chose the right angle to catch the reflections off the side and in the left mirror.  Again, I had to shield the lens from flare from the right. 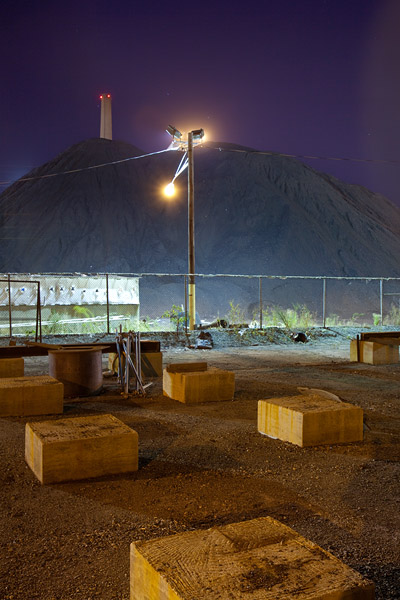 We were lucky to be able to slip into an open gate of the power plant where there were mountains of coal.  I only had to hide once when a company pick-up came by!  Careful placement of the camera shielded the very bright sodium vapor lamps with the light fixtures of the MV lamp.  These lamps make the coal appear with a blue cast.  The blue balances nicely with the warm tone of the concrete blocks.  The camera was up about 7 feet for this shot. 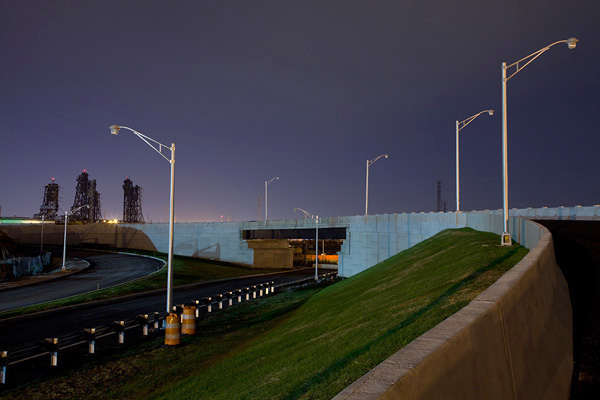 On the first of two nights shooting with Kay Kenny, the NJ night photographer, we slipped beyond the caution tape onto an under construction, but almost finished roadway in the Whitpenn Bridge area near Jersey City.  Note the street lamps are not on and everything is nice and clean!  The main light for this shot is a very bright MV construction lamp from the left.  To maintain the depth of field (focus) from the edge of the wall in the foreground to the the bridge in the background, I had to stop down to f11 and the exposure time became 3 minutes.  The color balance is again at 2800K.  The captured image was actually brighter than this, but darkened in Photoshop enough but still saving the shadow detail.  I will explain why in a future blog post. 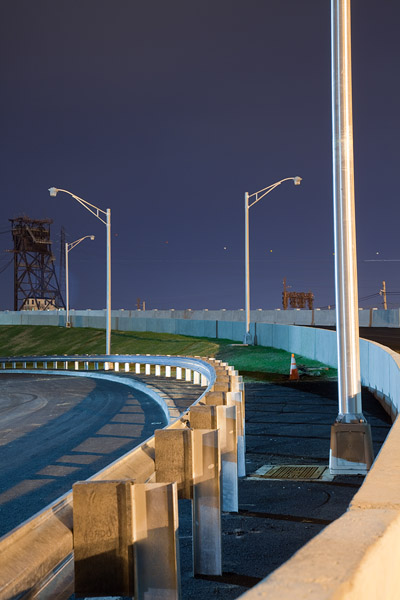 On this vertical version, I liked the mix of lights from the SV (warm toned) street lamps coming from the right and the blue MV light from the left.  The three white dots in the sky are actually markers on the power lines over the Hackensack River.  Like the others, the color balance was set at 2800K. 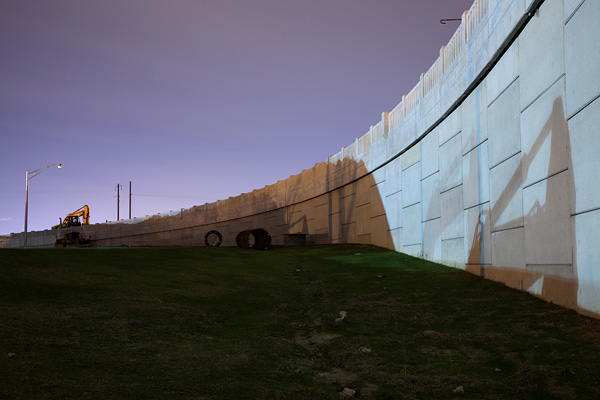 If you study this image with the one two images up, you can see where this was shot.  Again, the street light on the left is not lit and the MV lamp is casting the cyan colored cast on the right bridge approach.  The warm tone on the wall is from a SV lamp.  At first, you might think the shadow on the right is from that back hoe on the left, but is is actually from another one just out of sight on the left.  The mix of shadows is why I shot this 3 minute exposure.

There was so much to shoot in these two areas, that we barely scratched the surface.  Thanks to Kay for driving me around areas that she would not normally go to alone late at night in Jersey City…

You also might note that there is a new header image.  This is a composite of 4 images of the Ford Rouge River Plant, shot at high ISO from a ship on the Detroit River.  It does look ominous.