One question that comes up regularly is what I mean by “hiding lamps”.  This expression simply means positioning the camera in such a way to block the bright lights in a scene behind some object, such as a pole or tree.

Night photography is inherently contrasty, with near black skies and lamps of some sort in urban settings.  This contrast is higher than the film or sensor can handle, so any way we can reduce that contrast, will help make a better image.  Hiding as many of the light sources is one of the best ways to lower contrast.  This is not always easy, but hiding the brightest lamps will help a lot.  Following are examples of “well hidden” and “not so well hidden” lamps and comparisons. 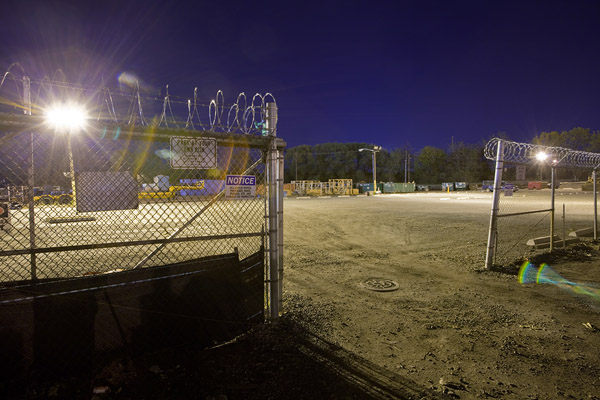 In this simple shot of an entrance to an industrial area, I simply fired off a shot (as an example) with no thought of placement.  I knew there was a shot to be had here, but I would have to carefully place the camera and tripod.  Following is the final shot I made, after moving just a few feet. 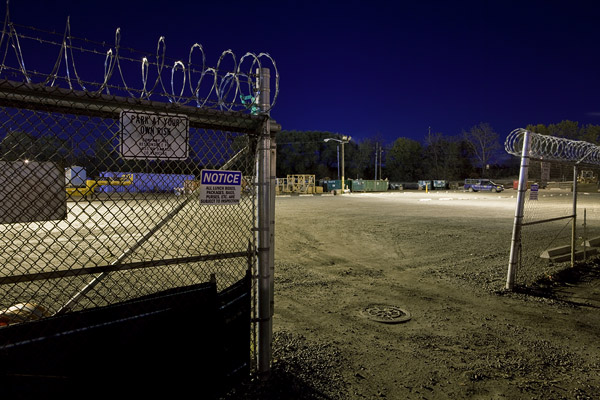 I hid the lamp on the left with the horizontal pole by lowering the camera a few inches and hiding the lamp on the right behind the vertical pole by moving to the left a bit.  This also got rid of the nasty flare and has more mood.  The reflections off the razor wire also adds interest and becomes an important part of the image. 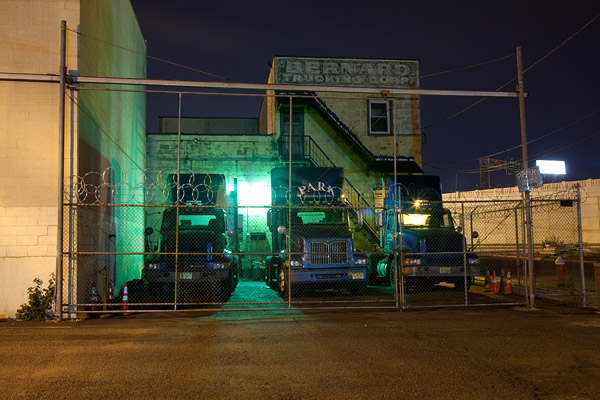 I purposely shot this view which is the same locale from last week’s blog post in Jersey City to show all the nasty bright lights.  I knew there were a couple of good shots to be made at this location, with the colorful mix of lights.  We are looking right into the green mercury vapor lamp between first and second trucks and a sodium vapor lamp is right above the third truck.  Also, that billboard on the highway in the background is very distracting, since it is blown out in this one minute exposure. 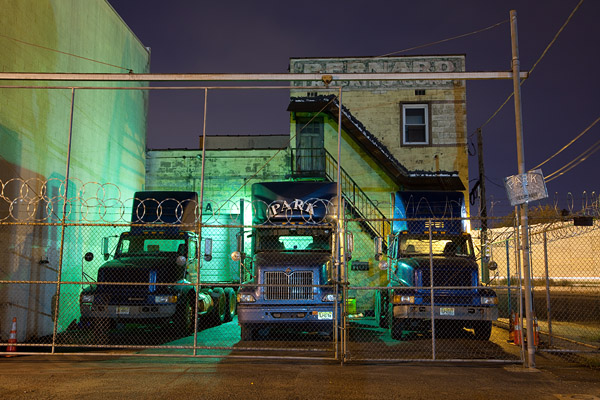 By moving to the right a few feet and lowering the camera a few inches, the MV lamp is hidden behind the middle truck and I hid the SV lamp behind the third truck.  I like it that you can still see the lights off the back wall through the truck’s cabs.  By moving in tighter, eliminating the bright, uninteresting wall on the left and by rotating the camera left, I cropped out the over-exposed billboard.  This made for a much better contrast ratio and more sky color because I was able to extend the exposure time a half stop to 90 seconds for better better sky and shadow detail. 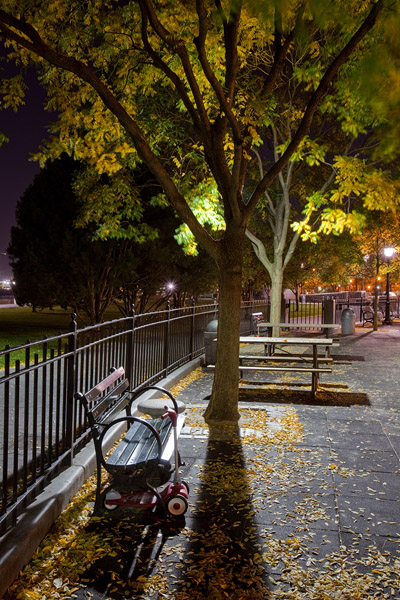 There is a very bright lamp behind that tree that would have blown out the shot.  The lamp on the right is far enough away and is not as bright.  Note how the hidden lamp has illuminated the second tree.  The fall foliage at night caught my eye in this north Battery Park shot in Manhattan. 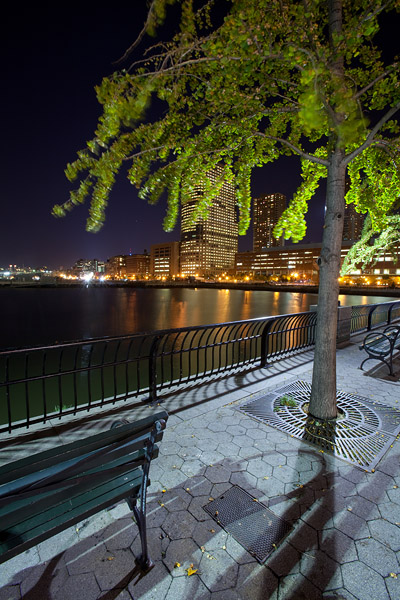 Here I also positioned the camera to place the lamp behind the tree.  You can see from the shadows, that there are additional lamps on the left and right.  The left lamp lit the tree and bench.  I had to use a card to keep the light from flaring from the right, since it was so close to the edge of the frame.  This is also called a “gobo”.  I like the mix of cool MV lamps on the walkway with the warm SV lamps behind on West Street, Manhattan. 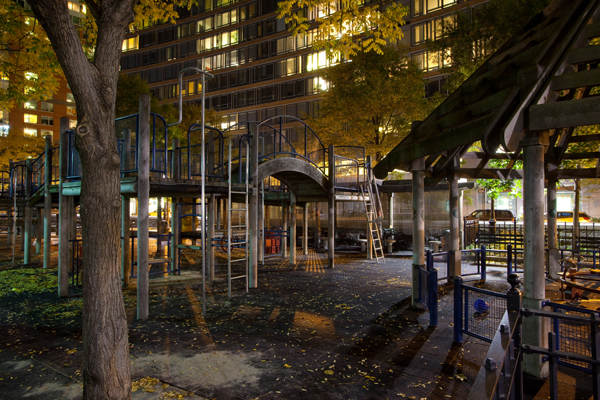 This shot of a playground on Manhattan’s Westside, was a challenge because there are so many lamps hidden in this shot.  There is a lot going in this shot that is appreciated at a larger size.  Note the many streaks of light on the ground from all the different directions.  A move of a few inches in any direction would show a bright light.  The apartment lights being so bright show that it was darker here than it appears in this shot.  By blocking the lamps, I was able to double the exposure time to preserve the shadows.  This is a 2 minute exposure.