Over the past few weeks, I have been shooting at some chemical company storage “barns”, which are really long buildings (some 1/4 of a mile long) that store coal and petroleum coke.  Coke is a by-product of the refining of gasoline and looks similar to coal, used in the manufacture of steel and as a fuel in some power plants.

Inside these barns which are quite dark, even in the daytime, it was a challenge to shoot.  The fine black dust got into everything, and the light from 50 foot lights and daylight spilling in from the open door does not add much.  The product is flat black, as is much of the interior, which absorbs the light.  Exposures were in the multiple minute range, and could have easily been longer.  Because the final use of these images will be 50-60 inch prints, I shot them all in 4×5. 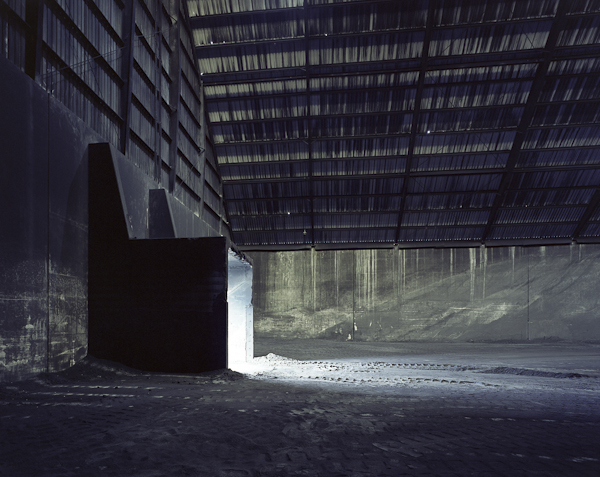 In this 5 minute exposure, most of the light is coming from the entrance and a bit from the ceiling fixtures.  This is much brighter than how it appeared to the naked eye. 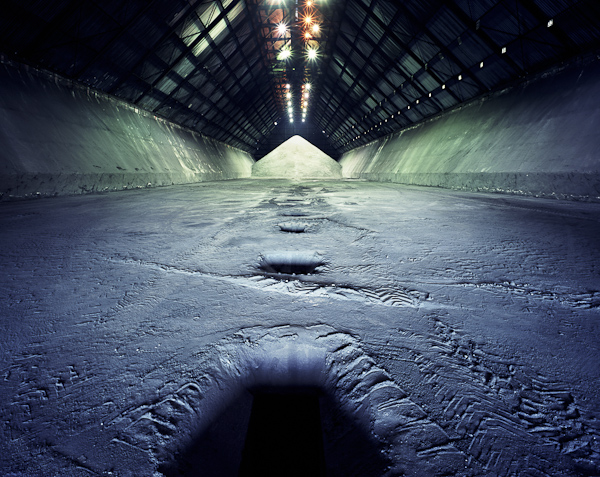 This shot was done from the open door and it shows the lights from the ceiling.  They are a mixture of mercury and sodium vapor, giving the green and warm orange color.  The blue light on the ground is daylight.  All this material is flat black–even that 40 foot pile in the background.  The holes in the floor are for front-loaders to push the material in which go on to conveyor belts, below.  I had to be very careful not to step back into these 10 foot deep holes. 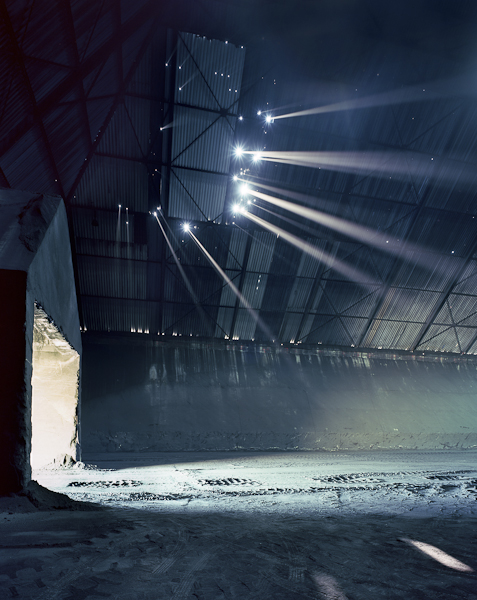 I had the escort turn off the overhead lamps for this shot.  What you are looking at is the sunlight coming through small holes (one inch or less) in the ceiling.  The black coal or coke dust being struck by the sunlight makes for these beautiful rays.  They were very sharp-edged beams of light, but because of the 6 minute exposure, the beams moved with the sun, softening the edges.  All the light in this image is from sunlight. 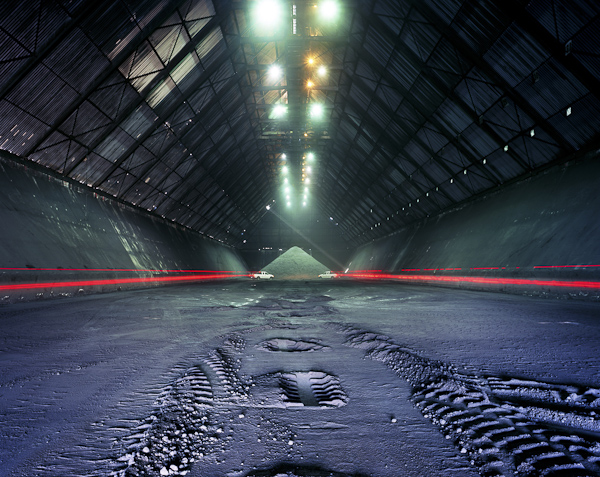 In this shot, I wanted to show a sense of scale, so I had the escort drive his white truck into the barn and slowly drive down one side, taking 45 seconds, then turn and stop for another minute.  This showed his taillights and yet made the truck show up after he stopped.  I then closed the shutter, had him drive back (he could not cross because of the holes in the floor for the converyor system).  I then sent him down the other side, doing the same thing.  The combined exposure is 4 minutes and it appears to be two trucks, but there was only one.  This was all done in camera, on one piece of film. 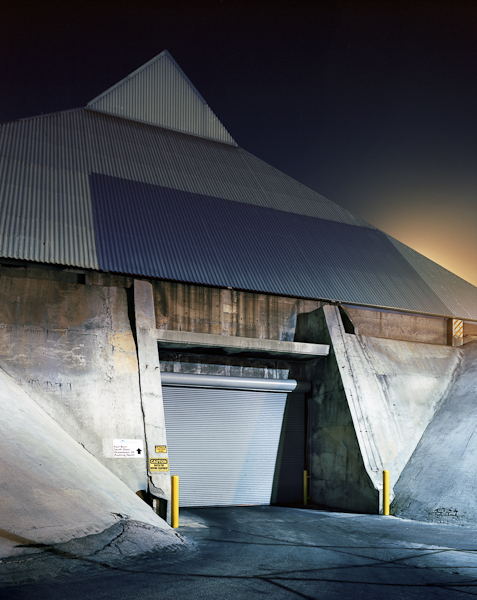 Here is a night shot of the end of one of the barns.  They are massive concrete structures.  In earlier, less enlightened times, there were no roofs on these facilities, but today environment laws require them to be covered to keep the black soot down. 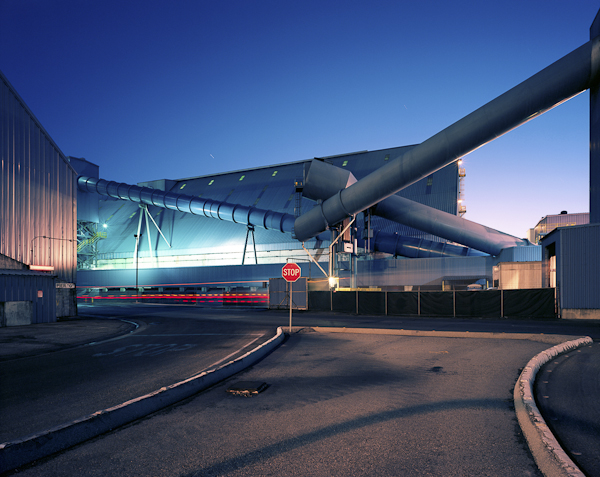 Here is a twilight view of part of the barns and conveyor system.  Much of the conveyor system is under ground.  This is only a small part of this huge facility.  The red lights are from a truck coming out of the building on the right after dumping his load.  This facility operates 24/7. 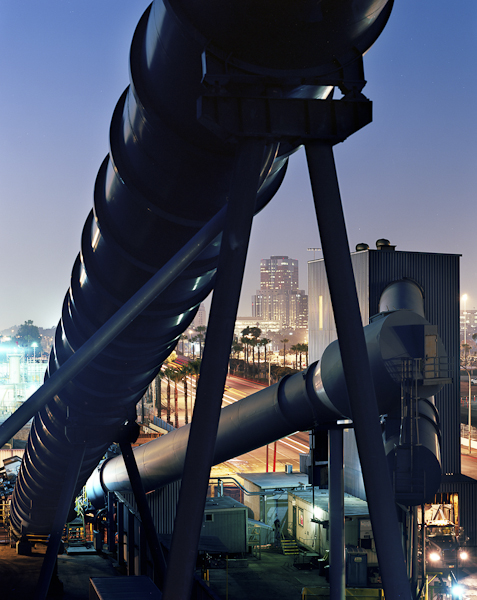 This view was taken from the catwalk of the building on the left in the image above, of course on a different night.  That is downtown Long Beach in the background.  There was so much vibration because of the conveyor system, that we had to shut it down for this 2 minute exposure.  This shot would have been impossible otherwise.  Via radio, we held the truck in the lower right and made sure he left his lights on.  Having people in control of the plant that can control lights and other infrastructure is so important in a location like this.

I’m looking forward to seeing which images they choose for their new offices.  There were many daytime shots made, but I’m sure some of the shots chosen will be the twilight and night views.

On a different note, last night was the solar eclipse, and did not expect to shoot it, but as luck would have it, the clouds started to roll in and you could look at the eclipse with the unprotected eye.  I went and grabbed my digital camera with a 400mm lens and shot this image, hand-held.  I used the “live view” feature to protect my eyes.  Exposure is 1/500 second at f8.  We are within a few minutes of the maximum of 85% here in Los Angeles.  Within 10 minutes the clouds got so thick as to obscure the eclipse, and it was done… 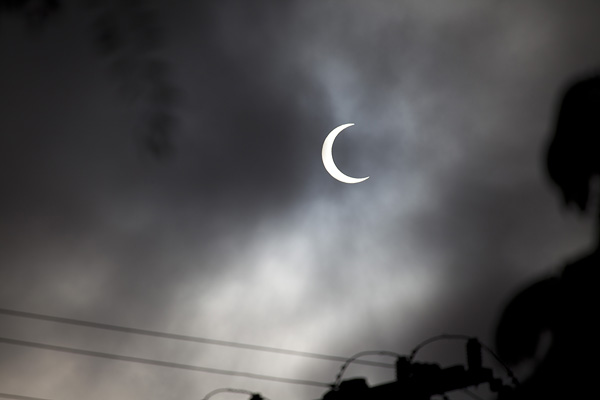