For this post, I had planned to show some images done at twilight and at night of fireflies (lightning bugs), since I had never tried shooting them before (they are an east coast summertime critter).  I was able to get several of them recorded as they darted about.  Unfortunately, they accidentally got deleted from the card when re-formatting.  Such is life in the digital age…

Instead, I will show a few images shot with my Sony NEX-5 when on a trip to Virginia last week.  Living in Los Angeles, we get very little rain and very rarely lightning, so it gave me a chance to shoot something different.  In the next three images, which were shot within 5 minutes of each other, you can see how different they look.  The first shot was done early in twilight with a light rain.  It was the umbrella that prompted me to shoot this. 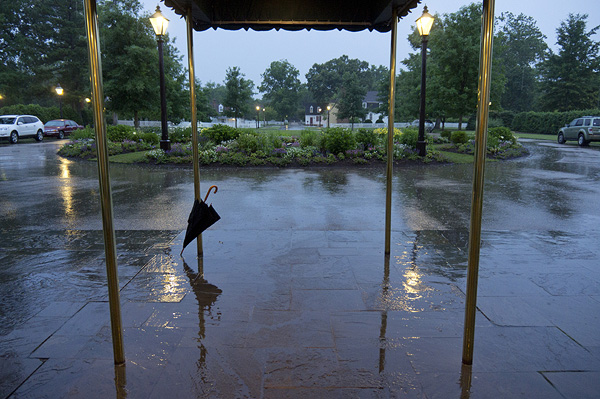 I wandered in and out of the lobby of the hotel just observing, and came back out and noticed that it had stopped raining and the sky had become a bit darker.  The umbrella was gone, but I shot it anyway. 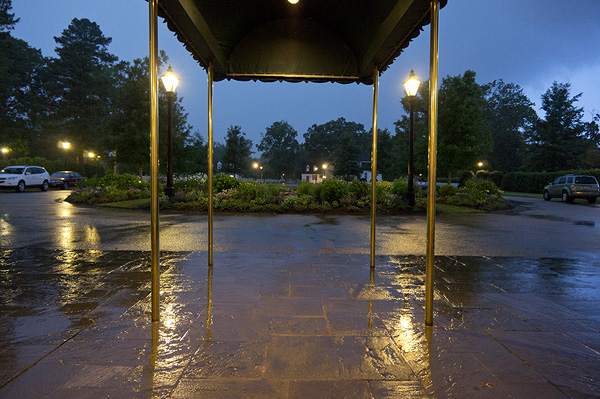 Note the nice warm tone from the lights from the lobby and the lights on the median, which is now brighter than the blue overcast light in the previous image.  After chatting with the bellman for a couple of minutes, the sky opened up and it began to really come down. 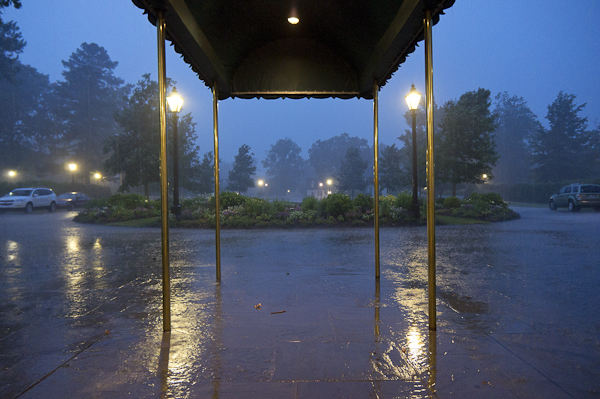 Note how in this version, the pouring rain has flattened the contrast, especially in the trees.  These are all quite different images in feeling and tonality.  Which works better is a matter of taste.  These are all hand-held at about 1/15 to 1/8 of a second.  You can’t tell here, but it was quite warm and muggy.

Later that evening the rain storm moved on, but there was still some distant lightning.  Here is an exposure of the side of the hotel, with the mixed lighting.  I wanted to try and capture a flash of lighting in a two second exposure. 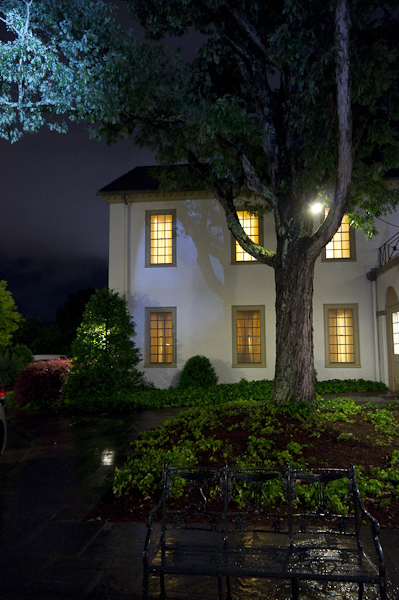 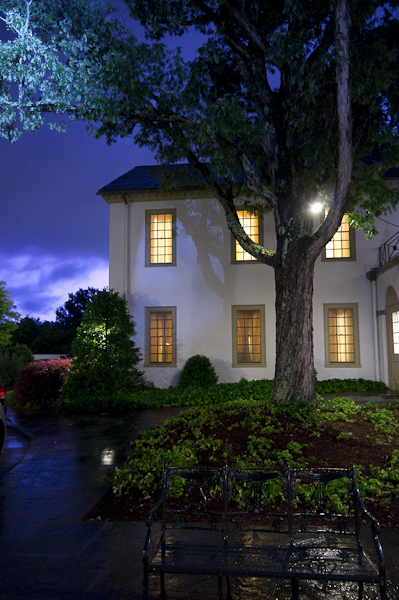 The glow in the sky gave it a twilight look, but it is indeed a night shot.  I liked how the blue light opened up the lower left of the image reflecting off the wet pavement and how you can now see through the tree.  This was the keeper of the set.

The previous week, I was working at the University of CA, Berkeley for a client who has been working on the seismic retrofitting of the Greek Theater.  I had not been to the theater in decades, and had never seen it empty.  They were setting up for the first concert since re-opening for the Beach Boys that Friday night.  Of course, I shot images in the daytime of the details of the project, but the overall shots at twilight were my favorite.  The next three images, shot seconds apart, were made with my 17mm tilt-shift lens and show it’s capability for shooting architecture.  All of these twilight shots and many others were done in a 15 minute time frame, taking advantage of that short window of twilight-time.  I had scouted all the best views in the daytime and got a work out running up and down the stadium rows in that short period. 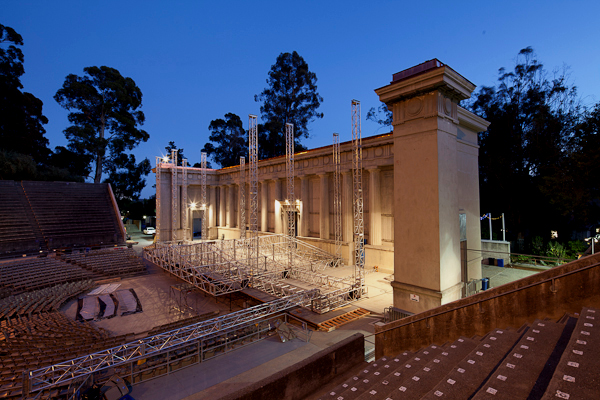 This theater is a small, intimate one, but I wanted to show the sweeping grandeur and the surrounding environment.  I very wide lens like the 17mm worked well. 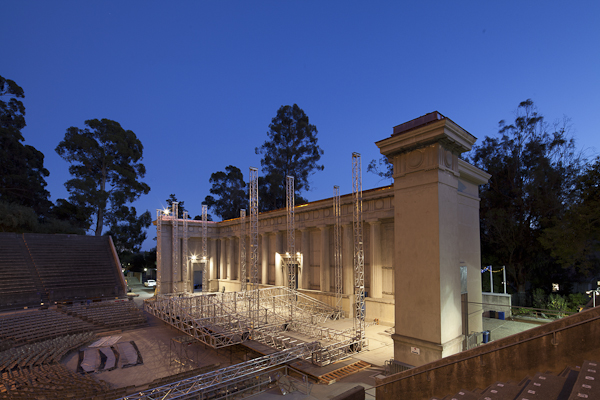 One of the advantages of a shift lens is that you can keep the camera locked in position on a tripod and change the view.  The above view shows more sky by raising the front of the lens only.  It shows less of the seats and foreground, giving room for text in the sky area if used for publication. 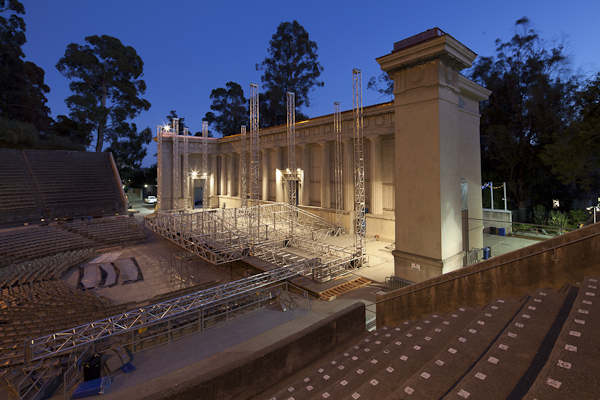 In this third view, I shifted the lens down to show more of the seats and less sky.  This version has tendency to give an anchor of the theater itself for the proscenium arch.  The camera was not moved for any of these three images.  The client got all three for whichever use they needed. 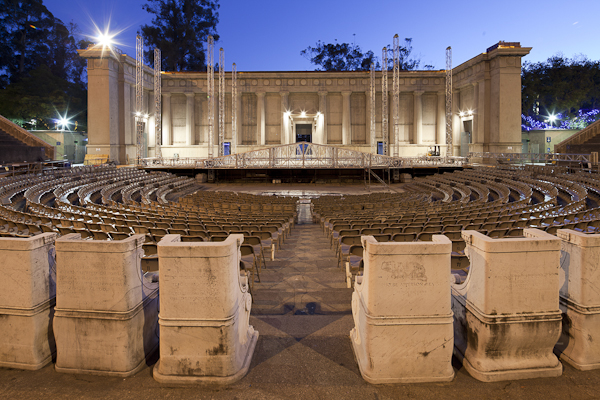 In this elevation view the mixed lighting on the “VIP” chairs in the foreground balances nicely with the proscenium arch. Note how that bright light on the left did not flare in this view.  The prime (single, fixed focal length) 17mm lens is very well engineered, handles specular lights well (with minimal flare and halation) and is extremely sharp. 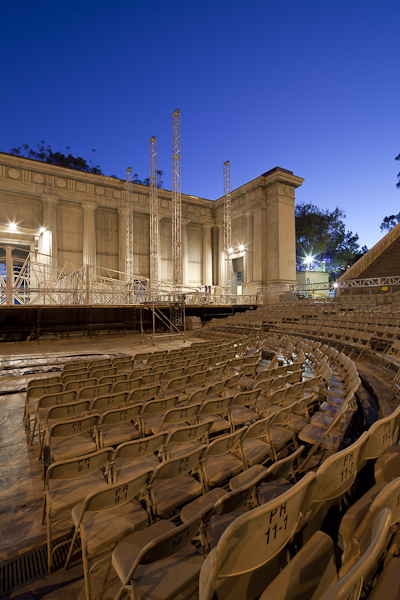 In this oblique view I thought the chairs were a bit to dominant, so I quickly switched to a moderate zoom lens, below for a tighter shot. 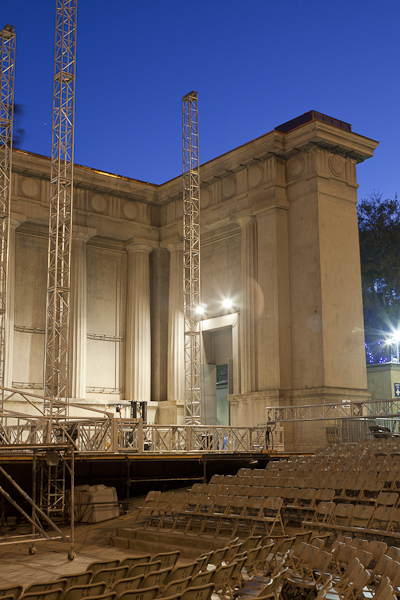 The chairs are less dominant, but note the verticals are no longer vertical because I had to tilt the camera upwards (it’s a fixed lens, like most lenses).  This distortion of the verticals is call “keystoning”.  You can also see flare from all the lamps in this shot.  Prime lenses handle flare much better than the best zoom lenses.  Yes, these are all fixable in Photoshop, but I feel it’s best to make the cleanest image possible at the time of exposure. All of these shots of the Greek are straight from the camera, with no manipulation.