Recently I have attained access to one of the largest recycling centers in the US here in Los Angeles.  They recycle almost anything, including home appliances, autos, big-rig trucks, buses, railroad cars and locomotives, heavy equipment and steel of all sorts.  It is a “green” business, but a multi-million dollar business just the same.  The recycled steel and other metals is loaded on ships and sent to Asia to make into everything from the automobiles to the cell phones and other consumables cherished here in the US.

I have been shooting off an on at another of their port facilities for about three years, and most of it has rarely been seen.  Some is commercial, but my personal work is the twilight/night work (is that a surprise?)  The night hides the reality of the shredded autos, broken glass and other dirty cast off bits, making the shapes and light the “art” that I do.

The commercial work is of workers and of the process itself, shot digitally during the day, but it’s the night with its harsh shadows and artificial “safety” lights that excites me.  As with most of my personal work, this series is shot in 4×5, both transparency and negative.

The environment is dirty and dusty, but they work hard to keep the dust down by hosing down the huge stacks of steel.  The facility is many acres, so we travel with the equipment on a golf cart or small pick-up truck.  My clothes are always so filthy at the end of a night’s shooting.  In my younger years I worked in environments like this, including being a welder, so I can relate to the workers.

As usual, I arrive in the daytime so I know where to be at twilight, scouting as much as I can to know where to shoot.  This time of year, the meal break time is just after twilight, when the whole place comes to a standstill with equipment just shut down where they are.  At this time I can get shots in the middle of the busiest parts of the facility.  Otherwise, there are trucks and heavy equipment running all over the place and you really have to watch where you walk.  At this facility, I am required to be escorted by the safety supervisor or one of his immediate subordinates–for good reason.  You know to freeze when you hear an air horn blast from a vehicle that has tires that are over 7 feet tall hauling many tons of steel.  They are so huge, I can literally walk under these “trucks”. 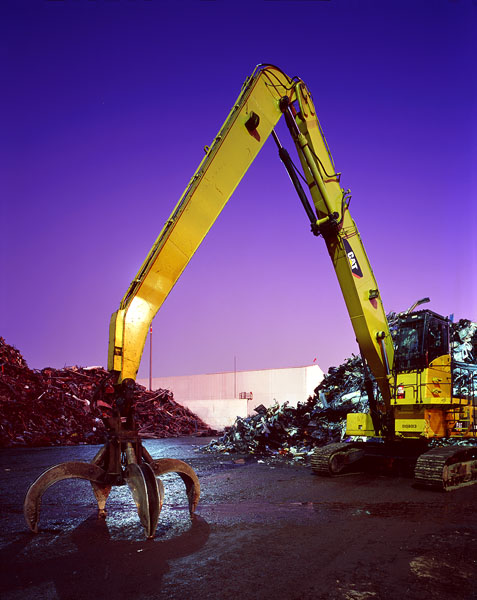 Here we see a Cat with a powerful claw that can lift more than a ton of shredded steel in a scoop.  The mountains of steel in the background are over 40 foot high.  Note the different color of the different types of scrap steel.  The ambient twilight mixed with the artificial light give an interesting mix of color.  I hope your monitor can see the subtly of the colors.  I have “hidden” a huge lamp behind the arm on the left.  You can see the reflections of the lamp on the wet concrete, making the “claw” stand out. 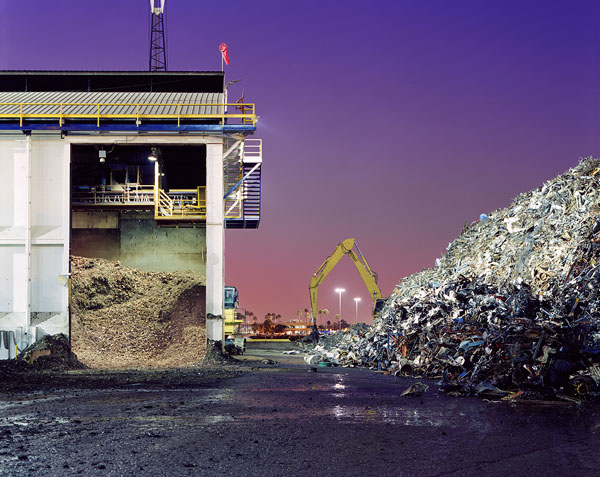 In this view of the yard, there is still a touch of twilight in the sky.  The 4 story building and crane give a sense of scale to the mountain of steel on the right, and this is one of many mountains of steel.  The material in the building is the “soft bits” (seats, carpeting,  headliner, etc.) left over from shredding the cars.  It smells and looks nasty close up.  I was told they use this as a cap for landfills.  Very little goes to waste. 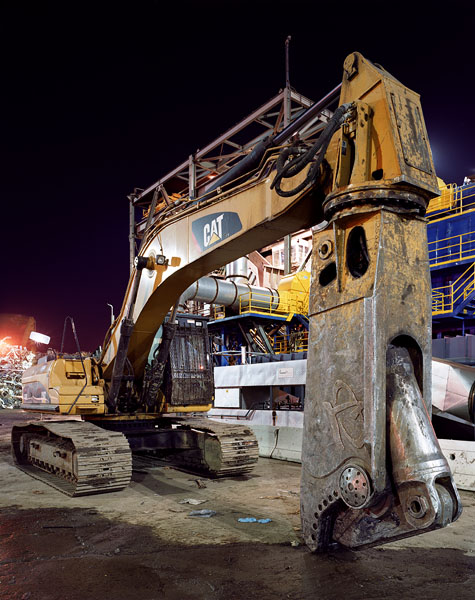 This nasty looking piece of equipment is a portable shear.  It can cut steel such as railroad rails.  The head can be articulated into almost any position.  The “business end” looks like the beak of a raptor.  In this shot, done during the mealtime break, I carefully hid the bright light of the facility behind.  It is a five minute exposure, and during the exposure a crane started to work on the left in the background, giving the orange blur. 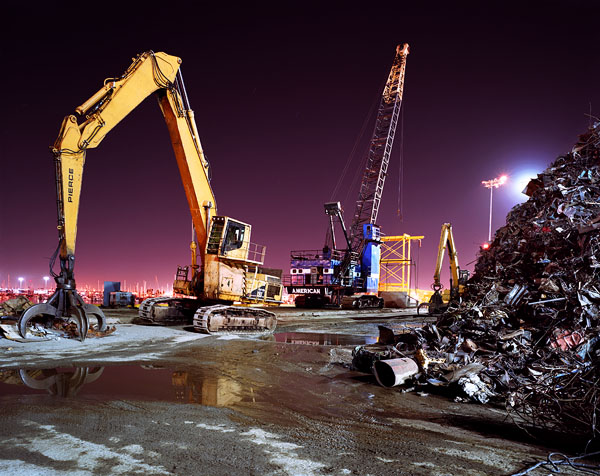 This shot was made on the harbor side of the yard, where is was a lot darker than the rest of the facility.  Exposures were 2-3 times longer, but the urban night sky came out well.    Note that I cropped a section of this image for the current blog masthead.  The side lighting helped create the fine detail in this image. 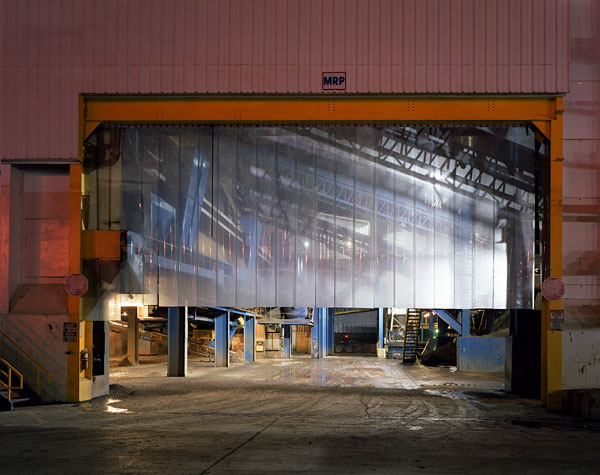 In this view we are looking into a sorting area, where there are various stacks of non-ferrous metals and the “fluff” from the shredding of auto seats, carpeting, headliner, etc.  It is quite dusty in this building, with its many conveyor systems.  I did one shot in this room, and the camera was covered in dust from the 10-15 minutes I was in there.  The plastic sheeting is to keep the dust down.  I strategically placed the camera to block the brightest lights and then used front shift to keep the door opening straight. 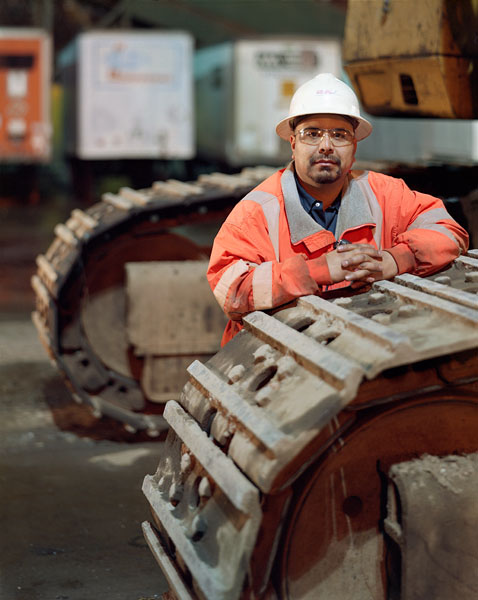 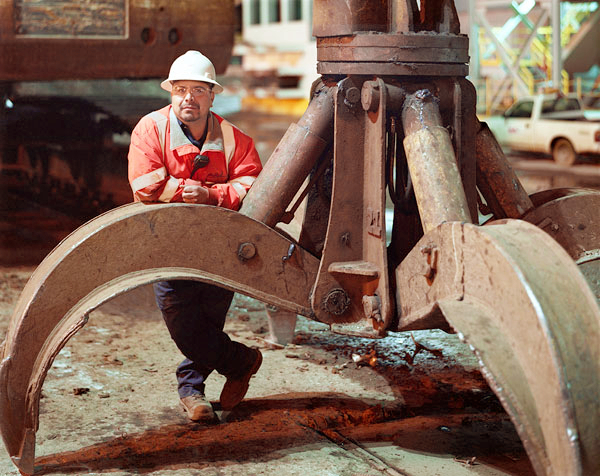 Many people who know my work think I do not photograph people.  On the contrary, I shoot them all the time (there are plenty of examples on my website).  For personal portraiture, like these shots of Ricardo, the safety manager and my escort, I like to use the view camera–even at night.

For those technically oriented, for 4×5 portraiture, I typically use my 210mm lens wide open at f5.6 with Kodak’s Portra 400 negative film.  In this day and age, I am thankful that Kodak still makes a higher speed film in both 4×5 and 8×10 and it is designed for portraiture, with softer tones.  This film is a little more grainy, but that is more of an issue with smaller formats like 35mm.  This extra speed allows for a one second exposure at f5.6 in most industrial areas.  You can’t expect a standing subject to stay still for more than a second.  I always keep a couple of holders loaded with this film, just in case.  This night, I shot one sheet of four different views of Ricardo, and these two are my favorites.

Recently, I have built a new camera/lens setup that I intend to use for night 4×5 portraiture, with an ultra fast lens that is six times brighter than f5.6.  There are a few more adjustments and finishing touches still needed on the camera and will start using it soon.  Stay in touch…

This week I have been continuing with my ‘closed auto dealership project’ (see last week’s blog post) and went shooting with Tom Johnson, an LA photographer, who shoots many street portraits, among other things.  He wrote a nice blog post on the evening shooting in Carson with me.  Have a look:  http://tommjohnson.blogspot.com/2011/02/my-evening-with-master.html .  I am flattered that he calls me a ‘master’, but he did learn a lot that evening.

You might have noticed that I have changed to a twice-monthly blog instead of weekly.  This will enable me to have a little more time to write a more narrative and (hopefully) more enjoyable read.  Comments are always welcome.