As many of you might know, I have been shooting the construction of the new Eastern Span of the San Francisco Bay Bridge for the past two and a half years.  Because of the monumentality and historic significance of this project, early on I decided to shoot it in large format 4×5.  As with most of my personal work, I have been shooting at twilight and at night for the most dramatic shots, but am also shooting during the day.

In the beginning, it was difficult to gain access and to explain that I was shooting the Bay Bridge as a personal, art project.  It took many phone calls to get access and I am still escorted each time I shoot because of the inherent danger of the location.  Anything can go wrong and it is important to have someone along.  I had to take safety classes, too.

Usually, I shoot in nice weather in SF, with the occasional, yet ubiquitous fog, but this last month there were heavy rains.  Shooting large format in the rain is a much greater challenge than digital (see the last post).  Again, keeping rain off the front lens element is the most important issue, as it will lead to distorted, unusable images.

We shot from locations such as welding tents, a covered porch and under an umbrella when nothing else was available. 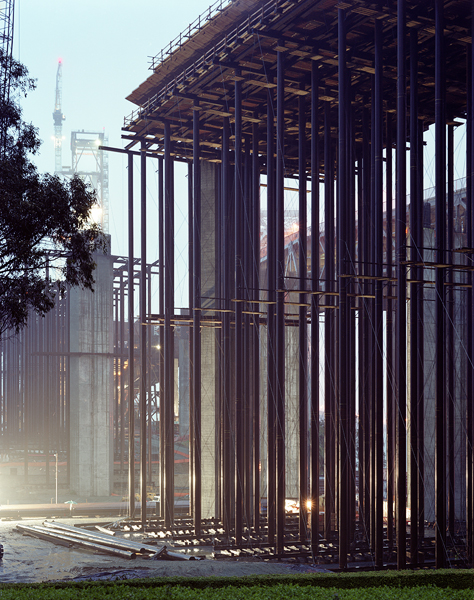 From a covered porch, I shot this view of the temporary steel structure for a new roadway section.  The rain was quite heavy at this point, scattering the light.  The new tower is visible in the background on the left.  What appealed to me was the reflections on the wet steel pipes.  This is a twilight shot, but it is difficult to tell because of the heavy rain. 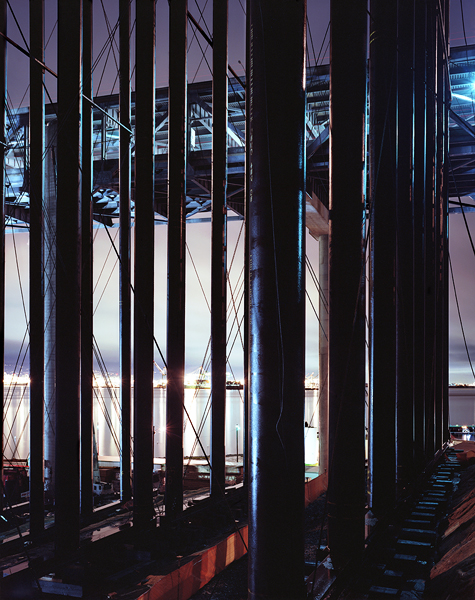 In this detail shot of some of the 100+ foot tall (and about 2 foot in diameter) wet pipes, the cyan color from mercury vapor lights mixed with some sodium vapor light (the reddish tone) enlivens the shot.  The Port of Oakland is in the background with the dense overcast, rainy night sky.  I was shooting under a tree in this shot to keep out of most of the heavy rain to create this 20 minute exposure. 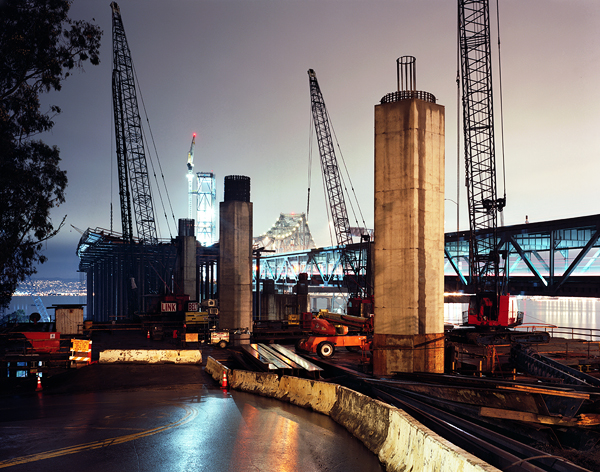 In this 20 minute exposure in the rain, I had to use an umbrella.  My arms got quite fatigued keeping the rain off the lens while at the same time making sure the umbrella did not show it the shot and being sure not bump the camera or tripod.  The reflections off the pavement and material adds a dimension not seen on a dry evening.  My escort, John, kept an eye out for construction worker traffic that comes around this hairpin curve.  I covered the lens when cars went by.

The camera was quite wet all through, but it simply dried out overnight when I left it set up and all was fine.  There are no electronics in a view camera…

The following night, we climbed up to the roadway section on top of the steel pipes in the previous three shots.  Bart, my escort, counted 23 flights of stairs to get up there.  Carrying the view camera tripod, lenses, accessories and film holders gave us a good work out! 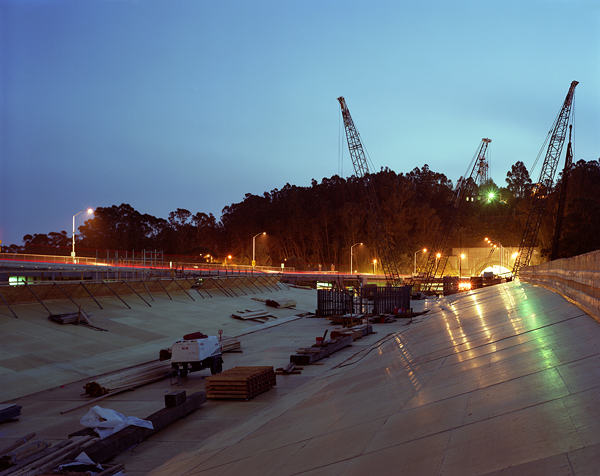 In this shot at twilight, we are looking west and can see the tunnel on Yerba Buena Island.  You can see the taillights of the westbound traffic on the temporary structure.  It was a challenge walking up the ~20 degree slope with the camera, tripod and film, especially since it had a dusting of sand-blasting glass beads (it was like walking on ball bearings!)  One of the tripod legs was at about 2 feet and the others were extended about 5 feet for this shot. 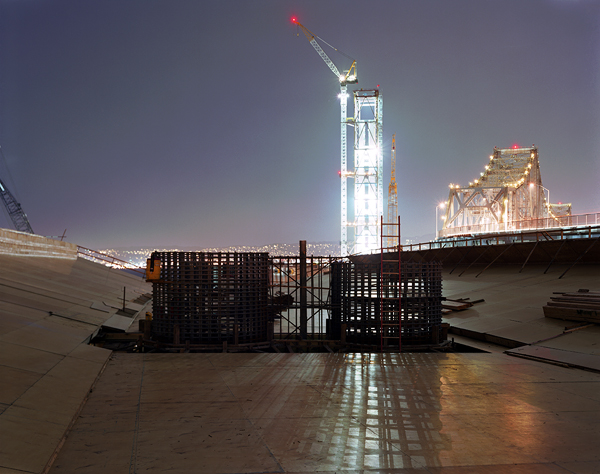 This is one of several images made from this roadbed section and is my favorite.  It is now nighttime and this is a 30 minute exposure, lit with ambient light from the overcast sky (fortunately no rain this night).  Because of the very long exposure (to get the depth of field through the whole image with a longer focal length lens) the tower construction lights are quite bright.  In the background are the lights of Berkeley and Oakland.  This structure is the mold for a major concrete pour and the actual roadbed will be about 20 feet above this floor.

It was the lights coming through the rebar that made me take the time to set this difficult shot, using flashlights placed in the shot to compose and focus [Feel free to email me about this technique, if you are interested.]  It was quite dark and we had to use flashlights just to walk around.

We only had to do a little burning (darkening) of the tower itself in this image.  There is so much detail in this image that you can see loose nails on the plywood “ground” in the foreground.

We did something I seldom do for these next three shots, which is after shooting until around 930 pm, Bart and I decided to get up and meet at the Island at 500 am to get access to the tower section before most of the workers arrive.  Once they start working, there is so much commotion and vibration that it is impossible to do very long exposures.

I did this 15 minute shot at around 500 am before first light. 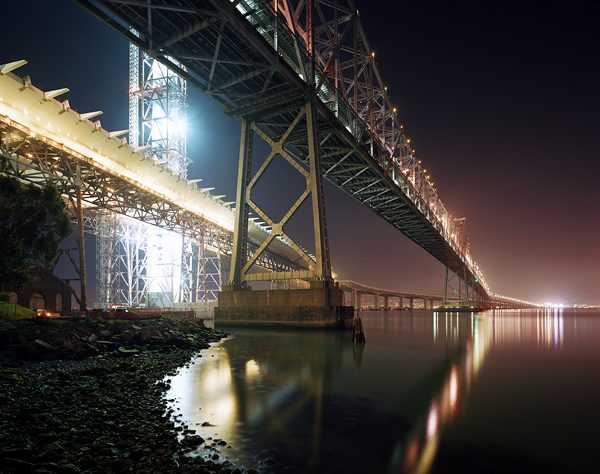 People who know me, know that I am not a morning person!  Bart arrived during this exposure and we got the elevator operator to get us up to the tower area roadbed (seen on the left).

Here is a 3 minute exposure made pre-dawn a few minutes after first light.  It is shot from a catwalk of the new bridge and shows both it and the existing one.  I did three exposures this time of day, but had movement in the other two (probably from the elevator bringing workers up, shaking the steel catwalk structure).  The earlier shot was the best mixture of ambient and artificial light, but those are the foibles of shooting large format at night–especially in a construction site!  The “spikes” are the supports for the pedestrian/bike lane that will connect the East Bay and YBI/Treasure Island. 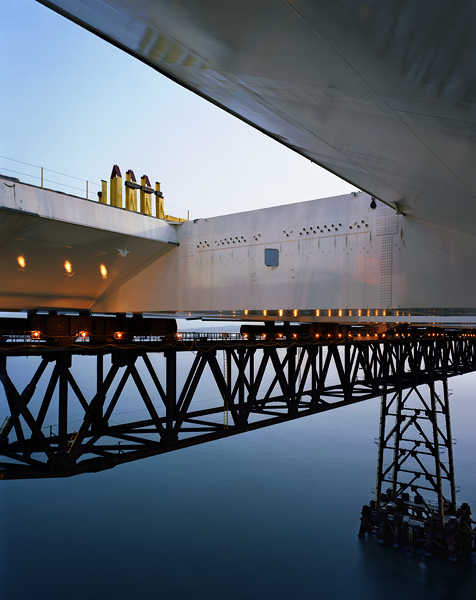 Ambling around on the catwalks is a slow process for safety’s sake (and a bit scary if you look down through the catwalk grating), so I only did four views before the sun rose.  This is the last one and I chose it for its graphic feel of shapes.  There is a bit of blue in the pre-dawn sky and it is still a one minute exposure.  You can see the catwalk lights are still on.  A few minutes later, they went off automatically.

Many ask why I don’t shoot in the early morning hours also, especially in an exotic location.  Actually, I have done it many times on commercial shoots where I have to jet somewhere get a twilight shots of a plant or factory and you only have 1-2 days.  To get several angles, I shoot at both sunrise and sunset.

One of the reasons I don’t prefer to shoot in the early morning is that you have to be in the right place for first light, and you don’t really know where that is, unless you have been there before at dawn.  Also, there is usually less haze in the morning and that light comes up very quickly, limiting your twilight time.  The wind is usually calmer in the morning, which is helpful.

Personally, after the first couple of shots, I begin to get going and my night vision kicks in.  At dawn, once the sun has come up, you are done–there is really not much more to shoot.  For me, the juices are flowing and it’s a let down.  This particular morning I was going to get the first rays of the sun on the tower, and we were all set up to shoot it from the roadbed, but it turned out to be a hazy morning, and looked boring.  I never made the shot.  By 730 am, we were through.

For fun, here is a point-and-shoot image of me working, taken by Bart, up on the roadway around twilight.  That XXL Caltrans raincoat sure isn’t flattering! 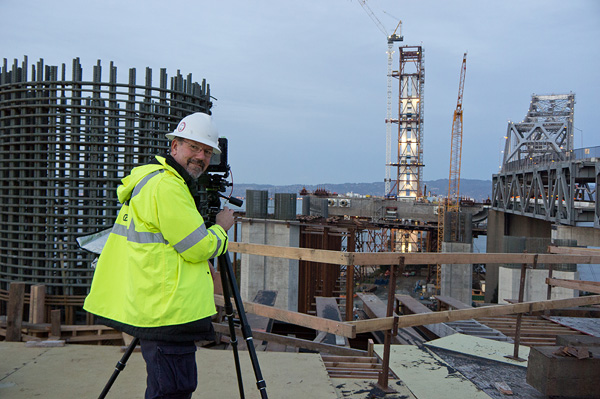 I have made hundreds of 4×5 views of this project and there will be more before it’s done in 2013.  To me, this project has unlimited possibilities.

One last comment:  On August 26-28th, I will be leading a “Urban Night Photography” workshop with Andy Frazer in Los Angeles.  Included are some helpful hands-on, how-to tips in a classroom situation as well as shooting at three different locations.  One night will be at a normally off-limits industrial location.