In this post, I have added a few more night shots from the freighter voyage, since I shot so prolifically at night in this once-in-a-lifetime situation.  These examples show relative movement.

In this first image, as the ship goes through the lock at the rate of a slow walk, you can see slight movement in the lock wall.  It is a 4 second exposure taken in the pre-dawn light.  Note that I have balanced for the normally yellow sodium vapor lamps, making them appear white.  This makes the sky a deep blue.  The green in the lower left is from a mercury vapor lamp on the ship (evidence of it are on the deck, too). 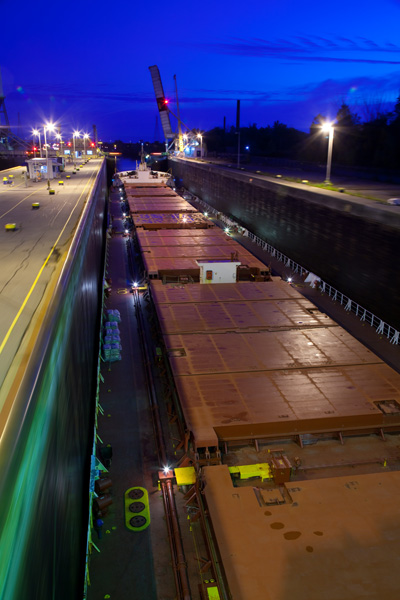 In this image taken a few minutes later, I wanted to really show movement, giving the appearance of speeding through the lock.  It is a 4 minute exposure.  Note that the dawn is quickly breaking during the exposure by the brighter sky. 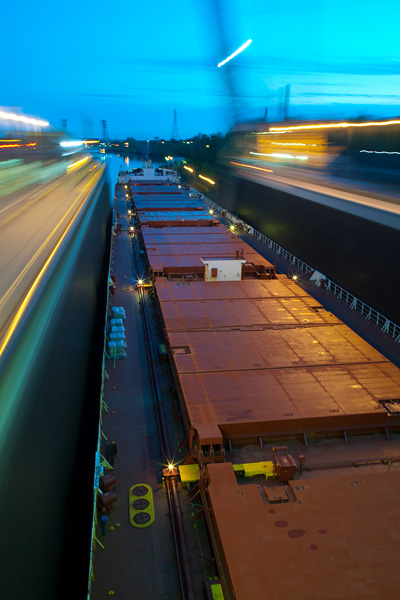 I stayed up all that night to shoot the ship coming through the locks of the Welland Canal, a series of 8 locks that takes some 11 hours to traverse, and I loved every minute of it.

In this image, I shot the Blue Water Bridge, at the southern tip of Lake Huron.  I wanted a overall shot, just for location and documentation.  It is shot at ISO 6400 at around 1/4 second.  This high ISO is good for scouting, especially from a moving ship. 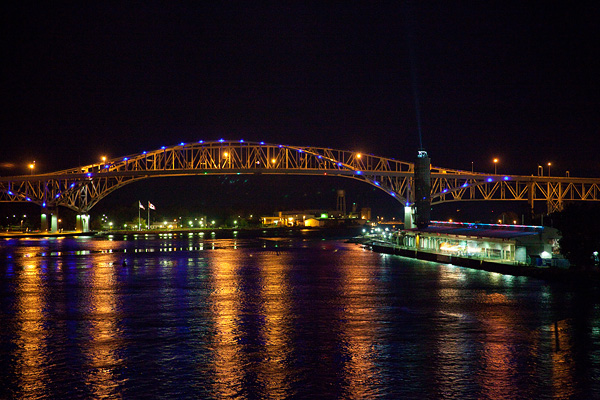 But this is the shot I really wanted, taken as we slipped under the bridge at a few knots. 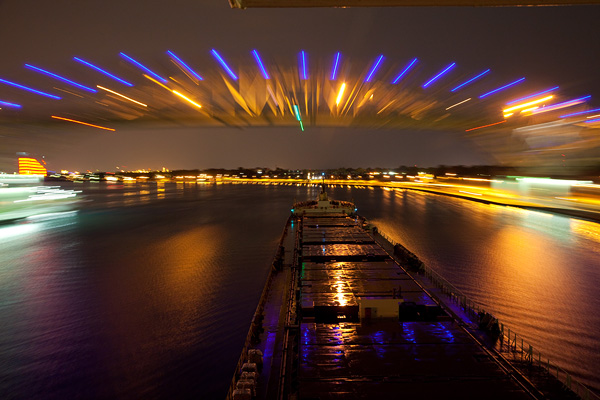 This is a 10 second exposure at ISO 200.  I was lucky, as it had just rained a few minutes prior, giving the reflections off the wet deck.  The blue lights are LED lamps.  This image gives a great sense of movement.  Being able to switch ISO speeds back and forth are an excellent use of the ‘custom’ functions on modern DSLRs.  Just one click of the function knob, and I was ready for this shot, especially helpful at night, under quickly changing circumstances.

Here is another image of the ship going through a tight channel.  The lights along the sides are to help the captain guide the ship.  It is a 30 second exposure, and one of 35 sequential images I did for this length of waterway.  I hope to do a stop motion video sequence with them, but have not figured out how to do it.  Any ideas you might have would be helpful. 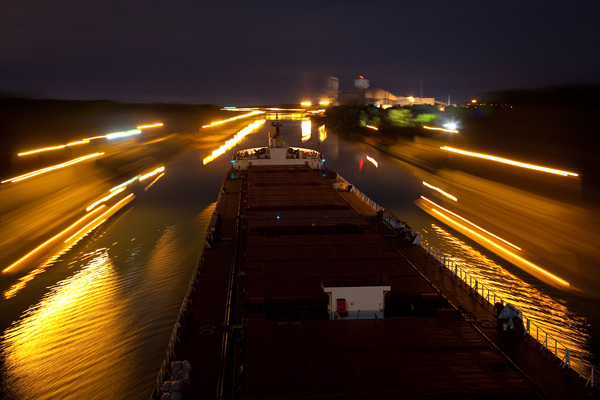 This image, looking aft from the port bridge wing, is a 10 second exposure.  The light in the sky is from the near full moon reflecting off the steam/smoke of the exhaust stack.  You can also see the shadows from the moonlight on the deck.  Again, I have balanced the yellow sodium vapor lamps to read as white. 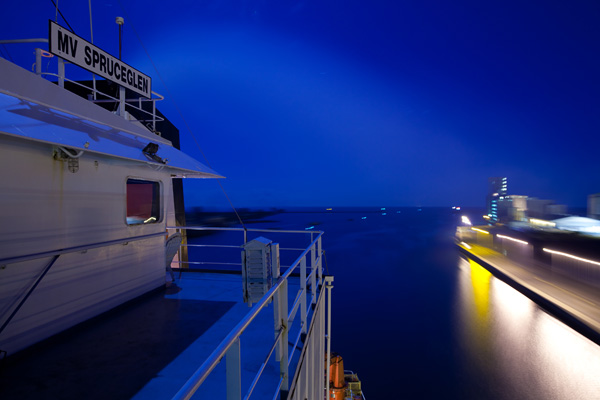 This image was taken from the starboard bridge wing, showing how the captain navigates the narrow passageways at night, using spot lights and there are also crew members calling the distances out via radio from the bow.  We are just a few feet away from the side of the channel–very tight for a 730 foot long ship.  The lamp uses a xenon bulb.  It is a one second exposure. 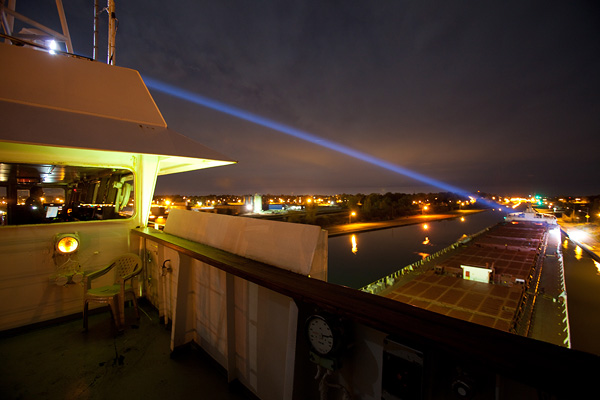 This view from the port bridge wing shows the glow of a mercury vapor (green) lamp that is pointed down towards the deck.  I let it go green and balanced to make the sodium vapor lamps (on shore) appear white.  It is a 4 second exposure, and you can see movement of the shore in relation to the ship.  If you look closely, you can see the silhouette of the captain through the window.  It takes extreme concentration to navigate these ships in these tight channels. 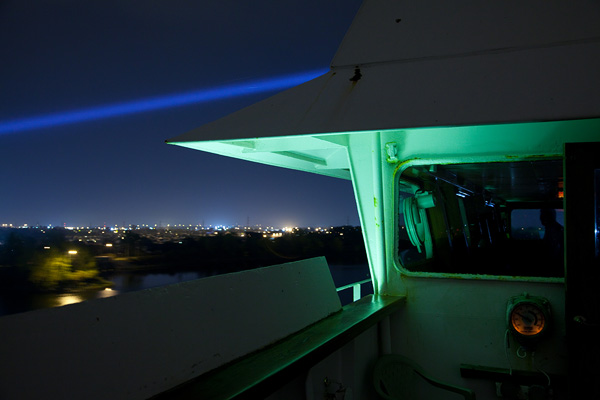 This is the Ford Rouge River Plant, south of Detroit at around 5 a.m.  The amount of activity for this time of day was remarkable.  The air smelled acrid, and it looks apocalyptic.  It was shot wide open at ISO 6400, and the grain/noise in this case adds to the texture of the image.  I had to use this fast speed, as we were sailing by at around 10 knots, and slower speeds had to much unwanted movement.  I did a series of 4 views what we are making into a panorama of this area. 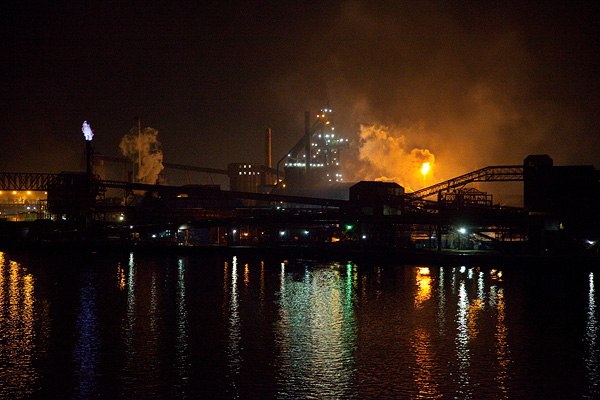 Recently, while showing this work, the question came up about whether or not if I was using a tripod.  Yes, all these images are shot on a tripod.  The ship is relatively stable and the tripod (and camera) move with it, making the ship appear sharp.  This unusual vantage point makes the background appear to move.  This is the same reason we get star trails on long exposures at night.  The stars appear to move, but in reality, we on earth are spinning at 1000 mph.

You don’t have to travel on a freighter on the Great Lakes to try this, but try bringing a camera and tripod on a ferry or cruise ship.  I have done that many times all over the world.