One of the hottest stories here in Los Angeles lately has been the moving of a 340 ton granite boulder from a quarry in Riverside to the Mid-Wilshire Los Angeles County Museum of Art.  This boulder will become part of a new exhibit called Levitated Mass.  Here is a diagram of what it will look like when it opens in late summer from a flier they were passing out along the streets.

The Rock has been traveling at night on a 105 mile circuitous route through LA and on one night last week my neighbor Norm and I drove to meet the caravan in Lakewood.  It was fascinating to watch this 200 foot long crane with 176 wheels pulled by a 6-wheel-drive truck and pushed from behind by two more big rig trucks.

There has been a lot of controversy about this art project.  Some say it is a financial folly (the $10 million project was paid for by private donations) others say the money could have been used better elsewhere (hundreds of workers have been employed just to move the rock and install it.)  Whether you like it or not, the best part about it all is that people are talking about art–even before it has been installed.  And to me, that’s a good thing.

Here is a shot that shows the scale of the 21 foot high rock. 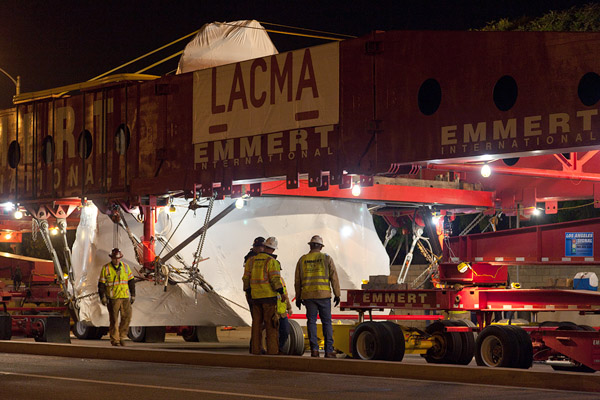 Of course I shot many stills, but decided to do some time-lapse clips of the rig negotiating a major intersection.  The exposures are about a second apart.

Also last week I went to the Getty Museum to see the Pacific Standard Time show, but really enjoyed the Lyonel Feininger exhibit.  I remember from my art school days that he was a master painter and photographer in the Bauhaus era in Germany, and famously had 22 images in Hitler’s ‘Degenerate Art’ show.  What I did not know was that he passionately ventured into night photography back in the 1920s.  He used a 4.5 x 6cm glass plate camera which was unusual, even in those days and he started in his late 50s to boot.  One of the interesting effects the glass plate causes is the haloing around points of light, like the one below. 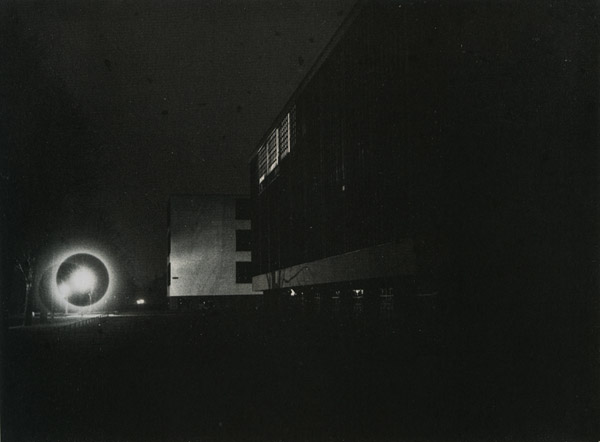 This phenomenon is caused by the double refraction of light on the two surfaces of the glass. 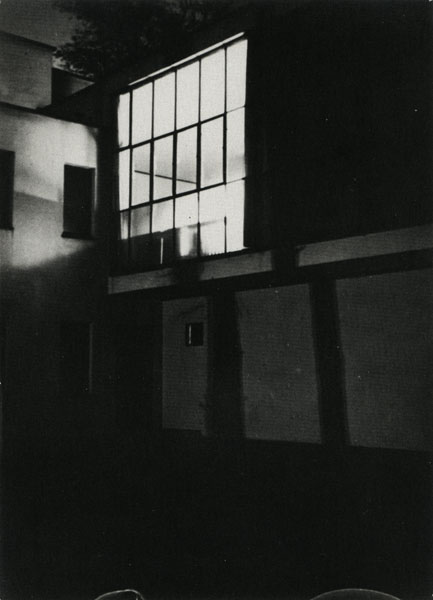 As you can see here, we was exploring the light spilling from the interior of the building and the shadows from a street lamp from the left.  Feninger was a friend, neighbor and contemporary of László Moholy-Nagy and this is the light coming from his studio next door. 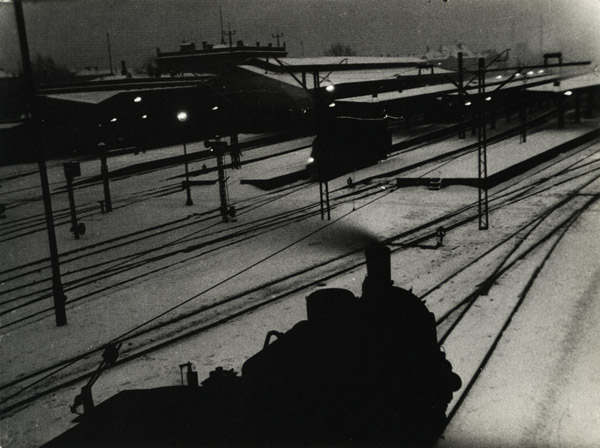 He also did some great train shots such as this rail yard in Dessau, Germany, 1928.  The contrast of the black locomotives and deep shadows with the snow makes for a dramatically graphic image.  His notes say that it was -20C (-4F) when he made this shot, and you can feel it in this image.

Unfortunately, this show came down earlier this week.  I think many a night shooter should revisit some of these early masters.  I’m glad I bought the catalog.

For those of you who are active “night photographers”, there is a juried show show called Night Light, associated with Darkroom Gallery in Vermont that is taking submissions until March 21.  Here is the link to the submissions page:  http://www.darkroomgallery.com/ex27

In 2010 I was the juror for their night photography show and contest.  There were some very creative images submitted last time.  Good luck!