Please note that I have created an easier way to sign up for these posts with the email sign up at right.  It is easier to use than RSS, which a few people complained about.  I don’t plan to do as many mass emails.  My goal is to update this blog weekly, so please sign up for notification.

Last week I was in NYC to lecture at the PhotoPlus trade show (and see the latest photo gear), and to talk for a class on night photography at NYU.  NYC is always a great city to shoot in, no matter what the time of year or climate.  Of course I managed to shoot several nights in the NY/NJ area.

One of the many things I did was go to the South Street Seaport Museum on the lower east side where the old Fulton Street Fish Market used to be.  The current show is up until January 10th and has an excellent exhibit on Alfred Stieglitz, with vintage prints of his early work in NYC, including several of his most famous night shots from the 1890s.  Included is the iconic shot “An Icy Night”, 1893, of the trees in a blizzard in Central Park (it’s a one hour exposure, and he was out shooting while he had pneumonia–now that’s dedication!) 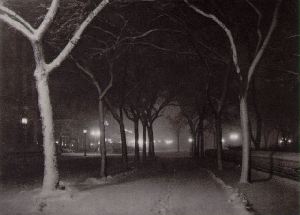 Another iconic image is “Reflections Night”, shot at 59th St. and Fifth avenue, 1897.  Also exhibited is the “From the Back Window of 291″ at night, an 8×10 original contact platinum print that has so much more detail and tone than I have seen in any reproduction.  There is also work shot in NYC from the 30s by other photographers such as Karl Struss and Berenice Abbott.  I bought the catalog of the show, “Alfred Stieglitz New York” by Bonnie Yochelson, published by Skira/Rizzoli. 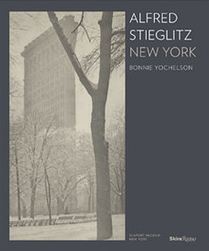 It is definitely worth the visit if you are in the NYC area over the next two months.  Here is the link for more information:  http://www.seany.org/index1.aspx?BD=9635

One of the evenings in NYC I went shooting with Lynn Saville, that veteran NY night photographer.  We walked the 1909 Manhattan Bridge (one of my favorite bridges in NYC, yet under-appreciated today) with the idea of shooting at twilight and at night, but the vibration on the bridge with all the subway traffic (four sets of tracks) and a freak downpour of rain killed that idea.  We decided to continue to walk the rest of the way into Brooklyn, and ended up in the DUMBO area (Down Under the Manhattan Bridge Overpass) with its warehouses.  Here is a “beauty” shot of my favorite bridge. 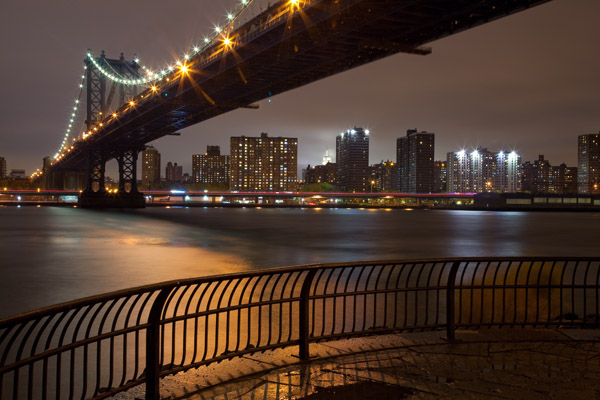 The red streaks over in Manhattan are police and firetrucks on FDR Drive, and that’s the Empire State Building in the center.  This is a 30 second exposure.  For these views, I over-rode the “Automatic White Balance” (AWB) and changed it to the Kelvin temperature setting.  For most urban night settings I use between 2800 and 3100 degrees to lower the red/orange cast of sodium vapor lamps that has a tendency to flood the sky.

Here is a wide shot at twilight showing the massive footing of the east tower of the Manhattan Bridge.  I had to crawl through the wet bushes and mud to get this vantage point, but I think it was worth it.  The orange glow on the right side of the stone base is from a sodium vapor lamp. 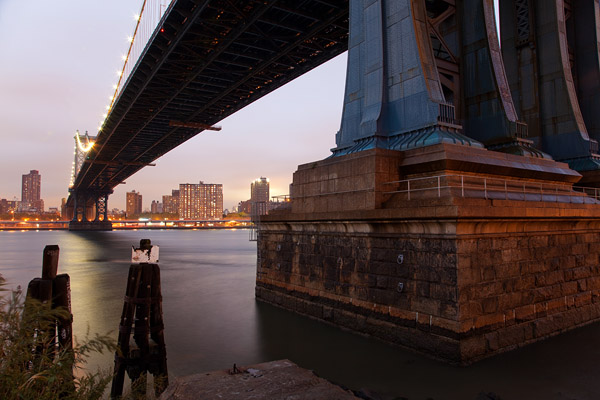 I moved around a bit to use the fall color foliage to both frame the shot and to use its leaves to hide some of the more intense lamps on the bridge.  This, again is a 30 second exposure. 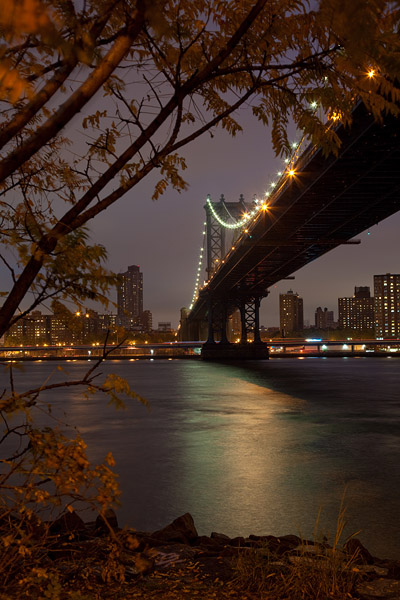 Just south of the Manhattan Bridge is the Brooklyn Bridge, that icon of NYC.  Again, I used the foliage on the left to block out some of the brighter lamps.  You can see from the reflection on the water how bright that lamp would have been (it still manages to burn through the leaves).  Moving the camera/tripod just a fraction of an inch makes the difference. 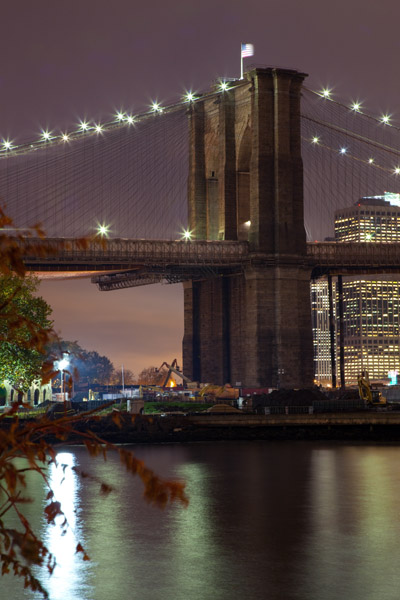 And here is Lynn setting up a shot of the Manhattan Bridge with the Brooklyn Bridge behind her.  I shot this with a slightly longer lens (105mm on a full frame sensor) to compress the city behind her.  Again, I used the yellow/orange fall foliage to add some warmth to the image.  She did not know I was shooting her and was steady the whole 30 seconds of this exposure–obviously working diligently! 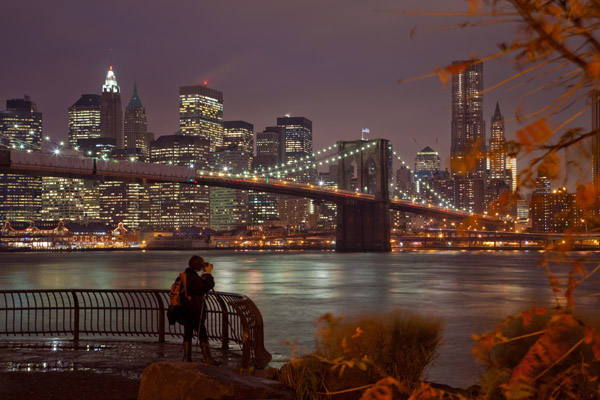 In this image of the Brooklyn Bridge, I used a warehouse in the foreground to add some depth and graphic interest.  There are two mercury vapor lamps on the side of the building (blue-green) and sodium vapor lamp on the left.  After I got home and looked through my books, I realized this is the same warehouse with the bridge behind it that the famed NY photographer Berenice Abbott shot in the 30s.  She was positioned about 50 feet to the left… 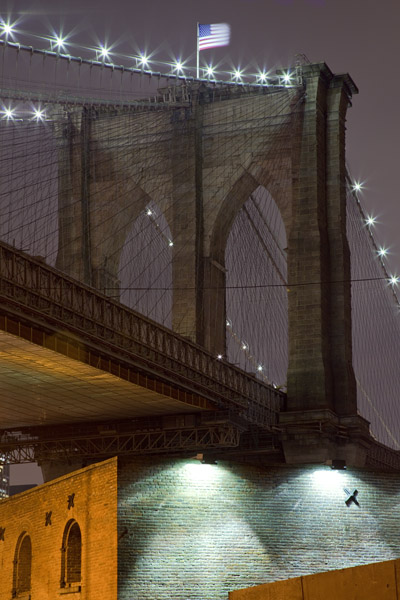 This is the view about 90 degrees from the image above.  I enjoyed the graphic nature of this view and the reflections off the bottom of the Brooklyn Bridge.  Again, I balanced out the orange light of the sodium vapor lamps, making the road and curb neutral gray–the color I envisioned it.  This also is a 30 second exposure. 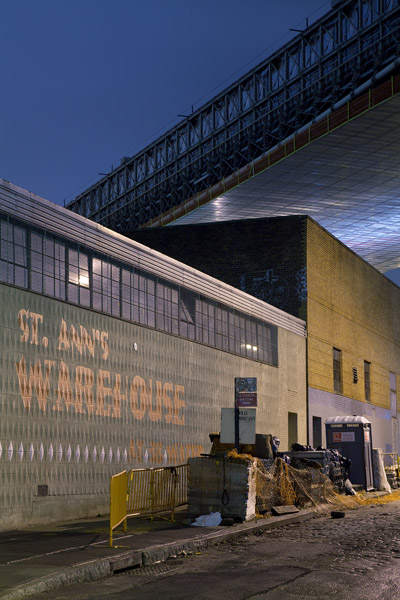 It seems that all the exposures were 30 seconds–for a reason–because I forgot my electronic cable release that evening, limiting me to the maximum shutter time of the camera.  We all forget things, but I always make do with what I have.

Next week I will show more images shot on some of the other nights in NYC.