A few weeks back, I tagged along on my wife Lee’s business trip to Colorado Springs, with the enticement of an inexpensive airfare, it being the winter.  These trips give us some needed time together from our hectic schedules and of course, I brought a camera, this time my digital SLR, one lens and tripod.  This evening, while she was at a dinner function, I ventured out to find a location to shoot.

There are beautiful sites in Colorado Springs like the Garden of the Gods, which we did hike in, but I enjoy shooting the man-made environment at night, as many of you know.  I wound up in the skid-row area along the tracks where a power plant caught my eye.  Here is a twilight “establishing” view. 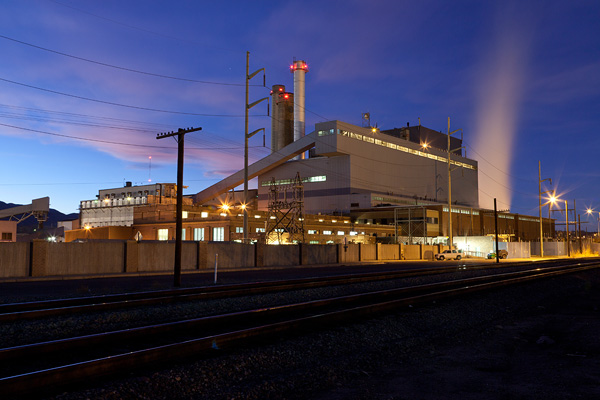 The temperature was in the mid-20s, and crisp and clear, typical CO weather in February.  I was lucky that week, as it had been -15F the previous week, which would make night shooting uncomfortable, especially for me being used to Southern California weather.

I was dressed in many layers, including the fingerless gloves with the mitten pouch that I bought in NJ for shooting there last fall.  I bought a woolen hat locally and my parka also had a hood to block the chill winds.  I quickly found out that my thin-soled boots were not up to standing on the icy ground…

While shooting the above shot, the railroad warning started to go off, but there wasn’t a train in sight for miles.  I took advantage of the blinking red lights for several minutes and some added color and did the following shots. 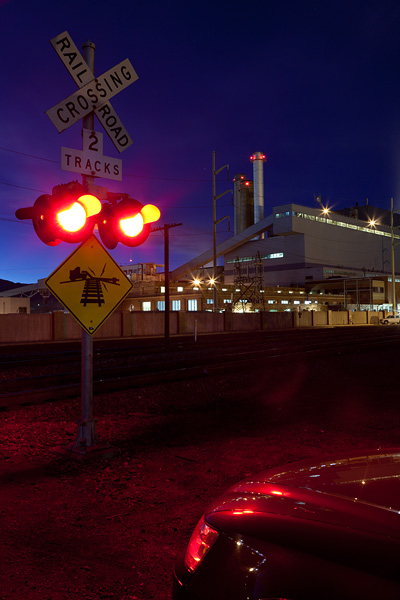 The rental car was also red which gave it a nice glow. 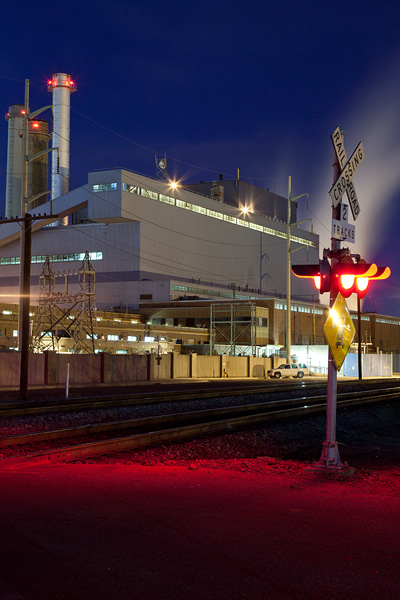 I did several variations of this shot, but like the placement of the RR crossing pole in front of the steam from the cooling towers.  The red glow on the ground is from the warning lamps.  There is no added light.

After about 5 minutes, a train finally did come by at a fast speed when I did this shot. 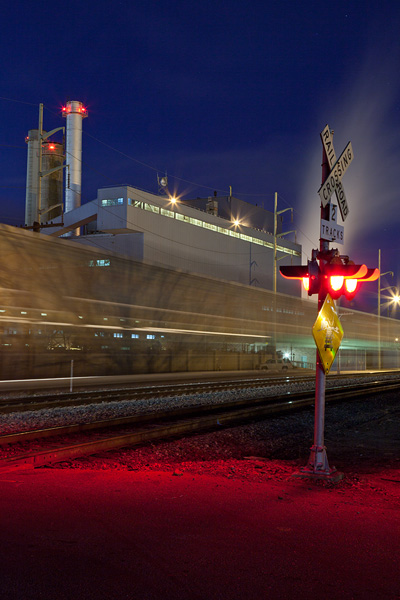 This view is similar to the one above, but has the added action of the train coming by.  Note the shadow of a bare tree on the side of the speeding train.  I did not notice it at the time, but it adds interest.  It would have been difficult to see this in real time with the distraction of the roaring of a speeding train a few feet away.  There were lots of auto carrier and flat-bed cars on this train and you can see “through” it for part of the exposure (which is 30 seconds).  I went to a wider view to get the red light off the stainless-steel auto carriers and got the following shot. 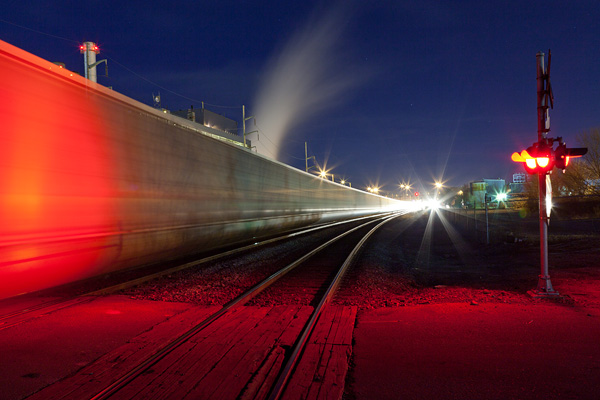 Another train is approaching on the nearer track but I worked briskly to get this shot.  Note that there is no RR crossing gate.  My rental car is just out of view on the right.

I knew the glare of the on-coming train would be too much for the camera to record, so I changed positions, quickly changed the ISO (sensor sensitivity or the equivalent of film speed) from 200 to 800 and shot this shot, blocking the intense light of the on-coming locomotive behind the warning signal pole.  This train was moving at a fairly fast clip and was lucky to avoid the bright lights in this 5 second exposure.  This shot worked for me because of the back-lighting on the rails and gravel. 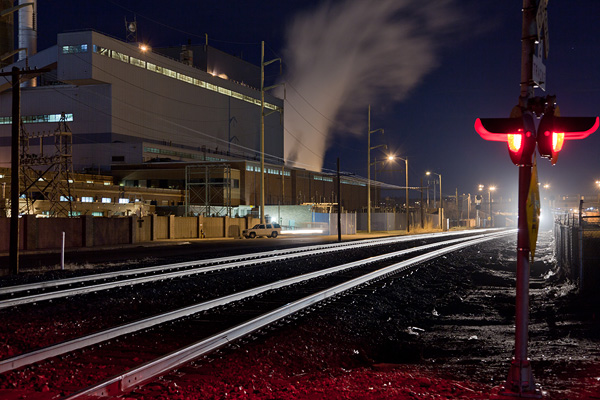 After the three trains past, I moved on to the power plant itself, trying to find some graphic shots of the structure.  The following two are my favorites of the 10-12 views I did. 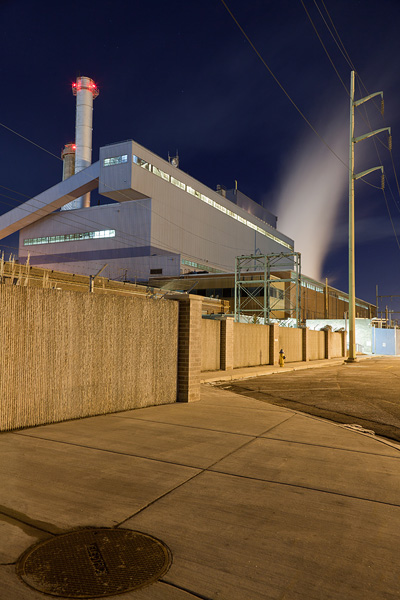 The man-hole cover seems to balance this image as I have a version without it and it is weaker. 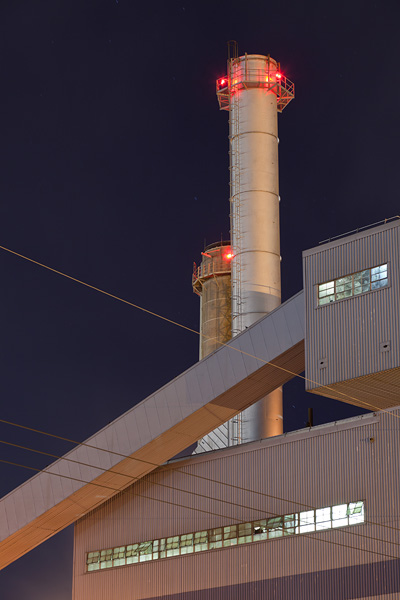 This image is all about shapes and texture.

I wandered around the facility perimeter and the massive cooling towers really intrigued me.  This shot is made after trying to find the best angle to shoot from while blocking the brightest lights.  Several of the lights are hidden behind signs and the wall.  The blue glow of the mercury vapor lamp through the gated entry adds a sense of mystery, as does the steam. 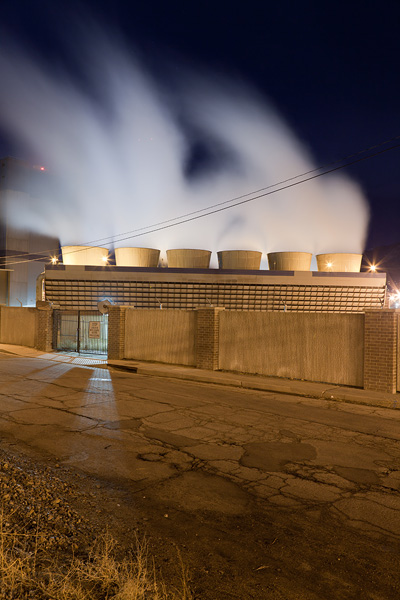 At this point, a security vehicle came up and the security guard asked what I was doing.  As it turns out the young man was a serious amateur photographer and started asking questions.  In earlier times, I keep postcards of my work on me to give and show what I do, but now you simply have the digital camera “chimp screen” to show (although I did give him a postcard that I always carry).  After a few minutes, he left me alone and said to have fun shooting.  I could not have gotten away with that in California!  He did come back a few minutes later and told me he enjoyed looking at my website.  The modern, instant world still fascinates me…

There was virtually no traffic on this mid-week night, and I was visited by two curious (and hungry) foxes that came within 10 feet.  That is something I’ve never seen in urban California.  Later in the evening, a raccoon also came by looking for something to eat.  Food is scarce in the cold and lean Colorado winter.

For this shot from under an overpass with a cell tower, I decided to change the white balance to a cooler temperature by using “custom white balance”. 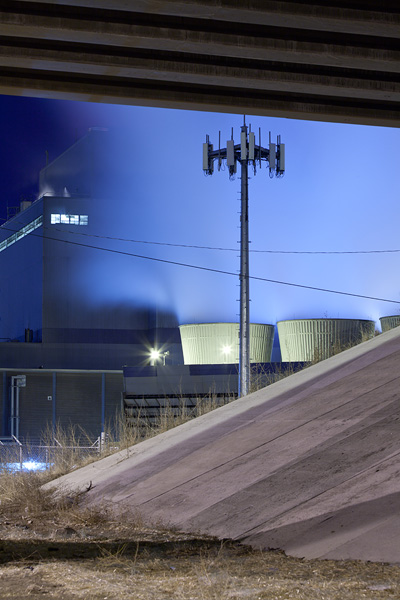 For those technically inclined, I forced the camera to balance the foreground to make it neutral gray.  The color temperature turned out to be 2000 degrees Kelvin (which is lower than the camera can be set to manually).  The camera then rendered the steam in blue.  The custom white balance feature is a a handy one that I use frequently at night, and yet one of the least understood by digital photographers.  If you are a digital photographer, I suggest you read your manual and learn how to use this feature.  Even my Sony point and shoot has this feature, as has every digital camera I have owned.

At this point I drove on a bit (and to warm up to the now 20 degree weather) and found a location at a park with the steam from the power plant was visible.  I chose a bare tree to fill the white of the steam from the other side of the highway. 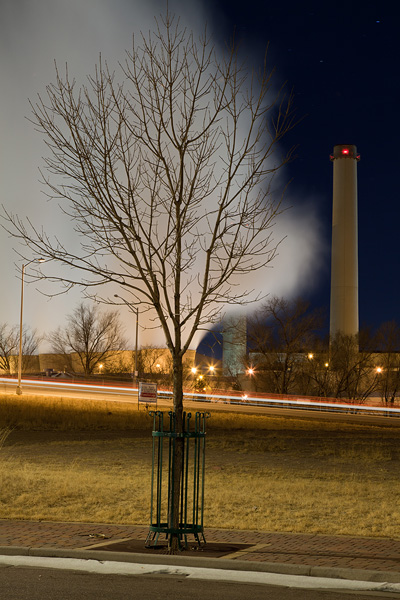 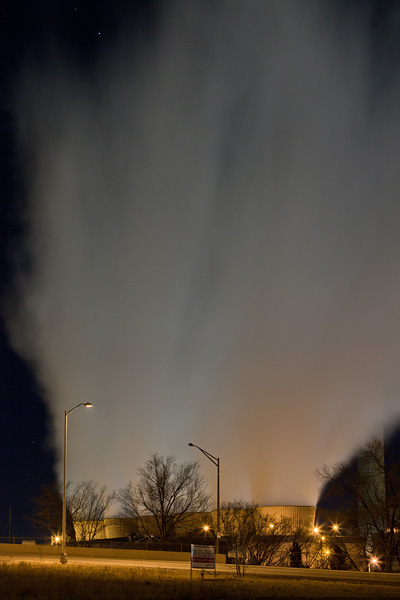 Because of the cold crisp air, the steam billows hundreds of feet into the sky–very different than in warmer climates.  For this image, I shot wide, tilting the camera upwards to show the steam plumes.  The mix of the orange sodium vapor lamps and the blue of the mercury vapor lamps (and the dark sky showing through) gives the impression of a sort of man-made Aurora Borealis.

It was a good evening of shooting, but was happy to get back to the hotel and warm up with a hot toddy…