Most people hole up and hide on rainy weekends, especially here in LA.  Normally, I would too, but I had to go out anyway and noticed our local “concrete river”, Ballona Creek, was a raging torrent.  Typically, this is a very placid trickle of water of run-off from watering lawns and folks washing their car, but during heavy rains, it drains 130 square miles of the LA basin.

Few people realize it, but West LA is a flood plain and the rivers in LA were concrete lined after a major flood in 1938.  Ballona Creek itself was lined in concrete in 1935.

There were few people out a couple of Sundays ago, and I decided to take my digital SLR and tripod and try and do some shooting of the roaring river–in the pouring rain.

These first two shots are establishing shots.  The first one shows the raging river and is a quarter second exposure.  Compare it to the next shot, which is a 30 second exposure. 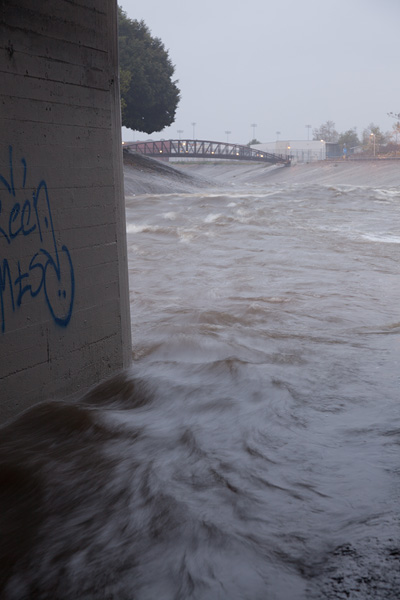 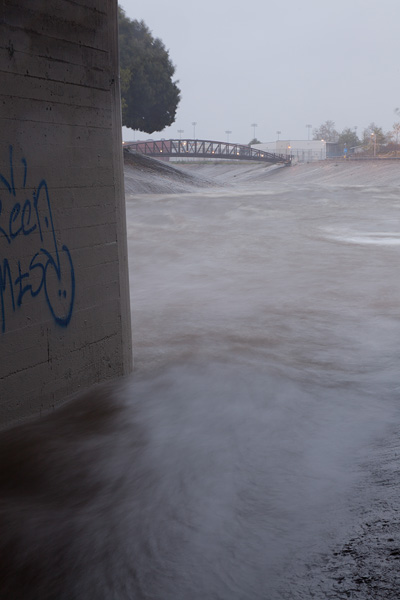 Note how fluid the river seems in the longer exposure view.  That is a pedestrian and bicycle bridge in the background.  By the way, the graffiti has been painted out within a few days of taking this shot.

In this shot, you can see the overflow from storm drains racing over the bike path.  The water is around 2 inches deep in this 25 foot wide section. 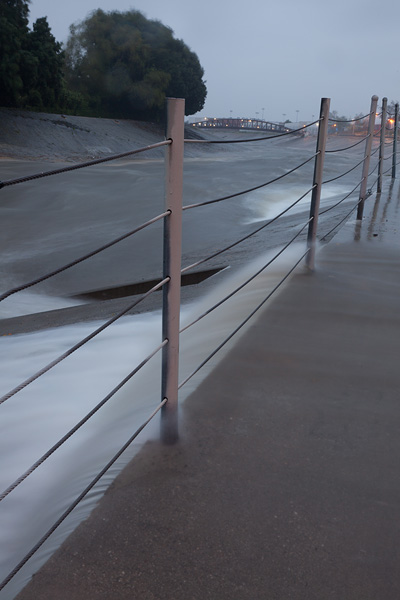 One of the most difficult issues was keeping the lens from getting wet, as most of these views are facing the driving rain which was coming from the west.  I lost many shots due to water droplets on front of the lens. 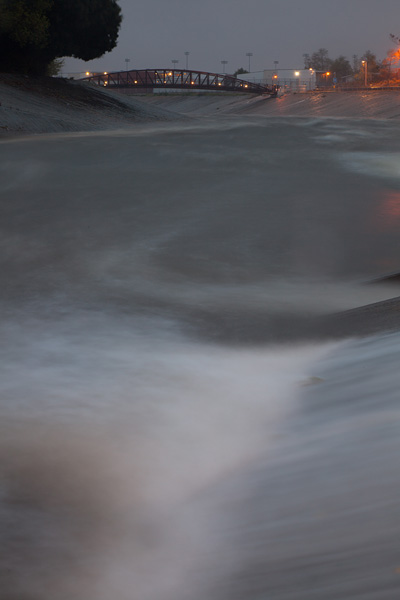 Here I have the tripod right at the waters edge of the creek and the cascading overflow.  You can imagine the roar an the noise of the dangerous, fast moving creek.

The lens hood kept some of the rain off the front of the lens, but I also had to wipe it down before each shot.  I had a kitchen towel draped over the camera itself to minimize water entering the lens and camera body. 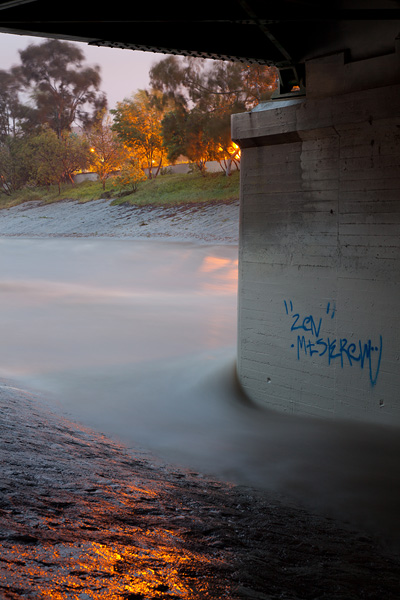 After a while, I had to get out of the driving rain and went under a bridge.  There I noticed the light reflected off the water and wet concrete.  Note the moving trees in the high winds.  I feel this is a nice mix of warm and cool tones. 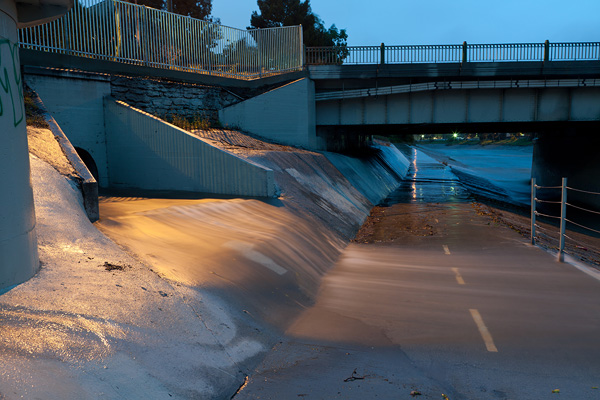 I decided it was worth walking through the roaring water on the bike path to shoot from the opposite direction.  My boots were already full of water anyway.  I was surprised at the speed and amount of water you see here coming out of the storm drain.  It went right over my boots and actually splashed up in my face, but it did not bother me as I was already soaked. 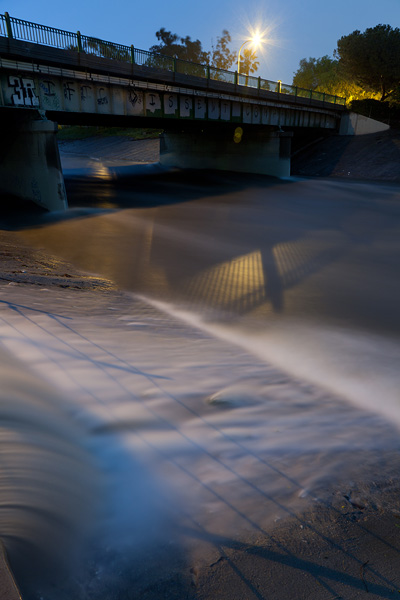 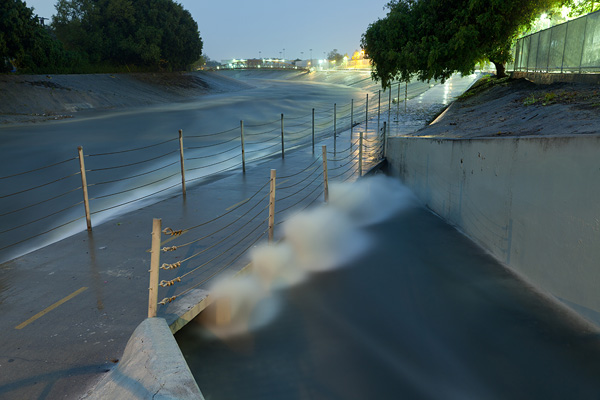 I climbed up on the embankment (which was quite slippery in the pouring rain) to shoot one of the storm drains that runs under the bike path.  Getting the tripod set up on the narrow edge was a challenge.  The fast-moving water was about 6 inches deep and roiling up against the vertical structures, causing the “cotton-ball” like features.  The mercury vapor lamps behind the tree on the right illuminated the wet path, adding more interest. 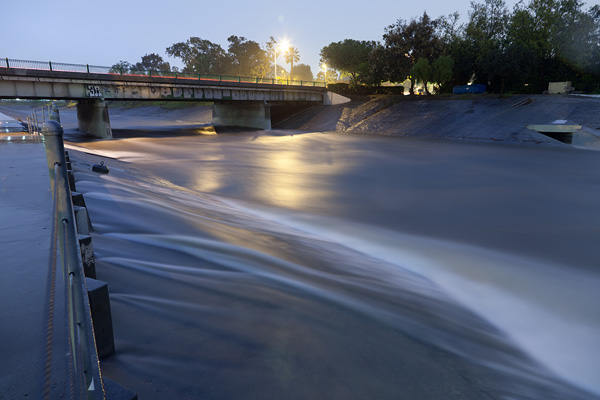 Here is the other side of the bike path where the water was cascading in to the creek.  I love the smooth texture of the water.  Note how in all these shots it seems like endless twilight, but it was indeed, night time.  The rain and dense cloud cover and the urban light reflecting off of it makes it appear light.  All the exposures (except for the first one) are 30 seconds.

At this point, after shooting about 45 minutes, my camera began to act up, with the the electronic camera readout in the viewfinder flickering and water was starting to get into the LDC on top of the camera, too. 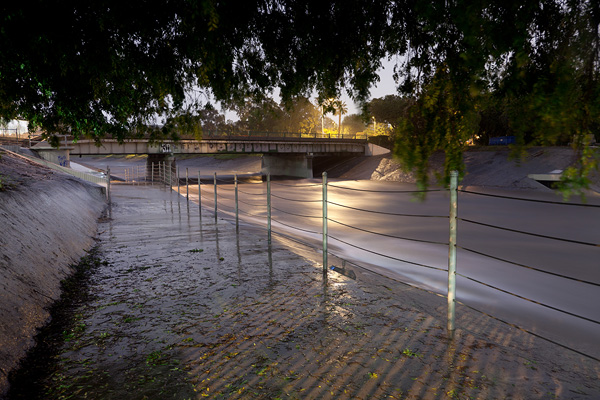 I noticed a street light coming through a fence behind me and did this final shot, somewhat protected by the tree.  My fear was that the camera might stop working completely–or worse–permanently.

When I got home I looked like a drown rat with an almost-dead camera.  After a few minutes of toweling off the camera and lens, I noticed moisture starting to fog within the lens.  These so called “pro-cameras” are not as water-resistant as they advertise.

I decided to dry the camera out by dismounting the lens, removing the battery and CF card, and putting it in the oven at the lowest setting of 150 degrees and let it slowly warm up.  It was never too hot to the touch, but nice and warm.  After an hour, all the fogging and electrical issues went away.

No, this is not recommended, but it worked.  It took a couple of days to dry out the tripod, which was left open and extended in my office.  If I lived in a wetter climate, I would have both better rain gear for me AND the camera, as shooting in the rain yields some unusual reflections and sparkle to the images.  Don’t be afraid to go out and shoot in the rain.