Earlier this month, I was able to continue my shooting on the Bay Bridge reconstruction project, this time working on the bridge deck area during the process of pulling the suspension cables.  This is a potentially dangerous operation, but things were going smoothly that afternoon and evening. 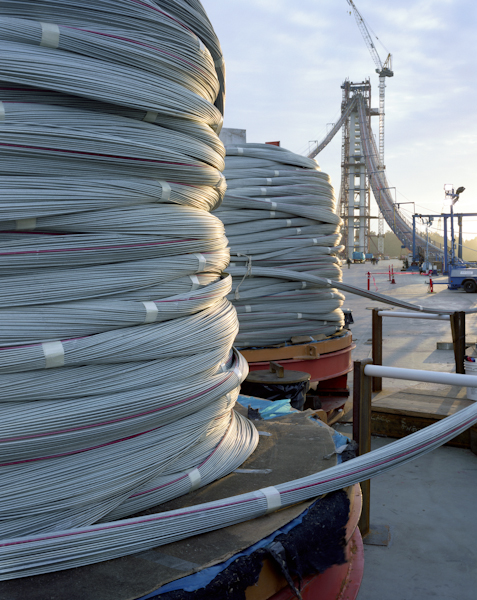 This late afternoon shot shows the bundles of cable (each strand is about the size of a pencil) that are in bundles of 134 strands.  The sun came out for a couple of minutes at the end of the day that shows the sunlight reflecting off the cables. 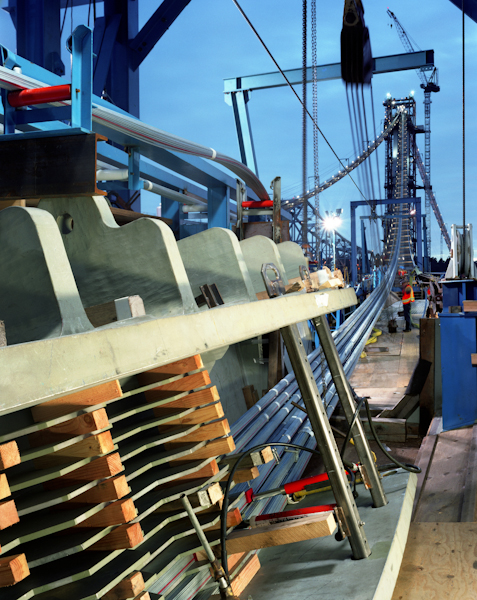 Here we see one of the saddles that the cable will wrap around, with the SAS tower in the background.  The cable above is being pulled along up the catwalks up over the tower.  Note the bundles of cables already in place.  Working with the 4×5 camera in this tight space while workers are all around me was a challenge.  Hiding the construction lamps by moving the camera was also critical.  The workers would give me just a minute or two to set up and make the shot before I had to get out of the way. 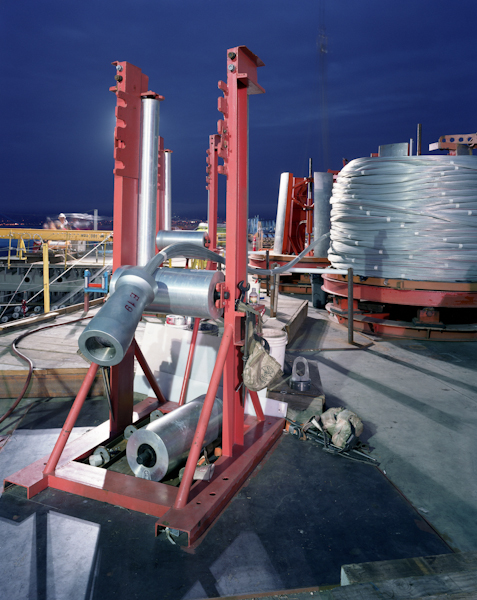 Here is the end of the cable bundle that is screwed into this massive socket (almost a foot in diameter) for the pulling.  Note that the background spool (of cable a mile long)  is now empty as compared to the first shot.  The cable has already been strung up on the bridge.  This shot was difficult as to hide all the back-lit safety lamps from glaring into the shot. 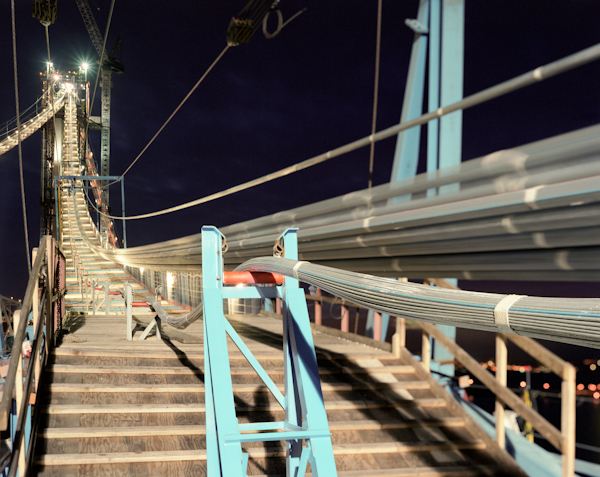 In this shot, you can see the cable bundle in the foreground that is being added to the background bundle up the catwalk.  The main group of cables are moving as you can see here in this two minute exposure.  Note the very select focus area of the new cable, its stand and the tower that the view camera allows. 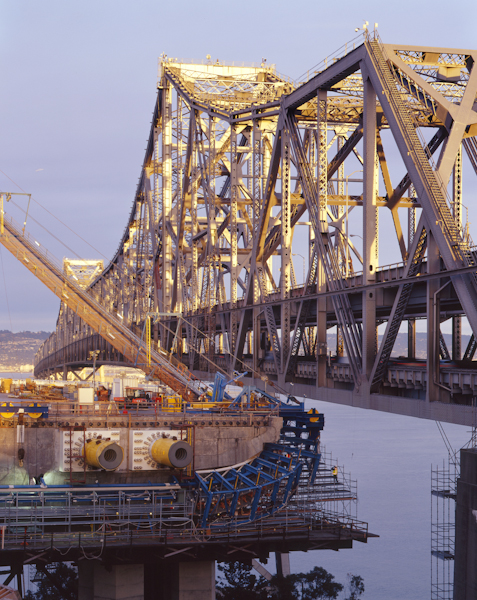 On next evening, I got access to the Yerba Buena Island Transition Structure, the roadway that will connect the new bridge to the island tunnel.  This image looking back shows the saddle on the southwest corner of the bridge.  The existing bridge is in the background.  Note the worker on the scaffolding to the right of the blue steel structure for scale. 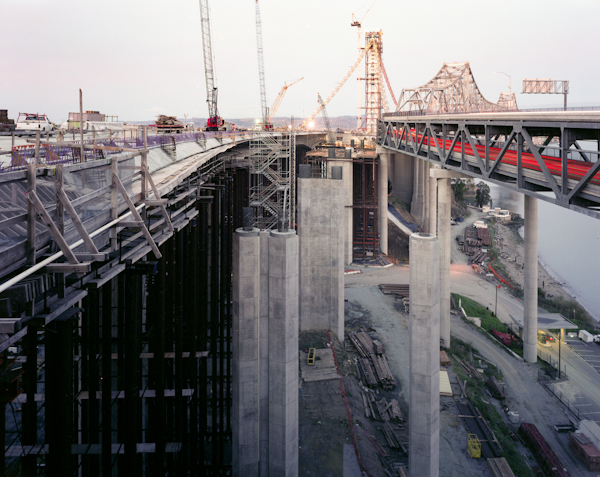 This view is from one of the concrete structural pillars (which was a bit scary, as it is not flat, but peaked–see below).  This shows the pillars and how high up this view is from the island. 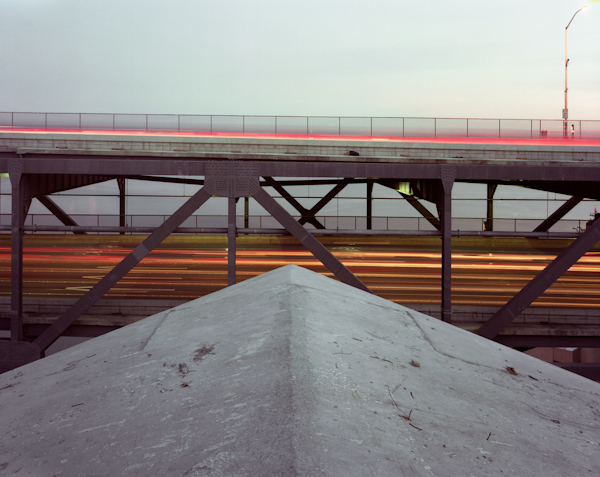 From the same location as the above shot, I turned the camera 90 degrees southward towards the temporary roadway of the existing bridge to make this graphic shot.  I tried my best to line everything up, but I realized that the bridge in the background is not level (it descends as it goes into the tunnel) and also curves.  It shows how all these complex curves make this process so complicated to build. 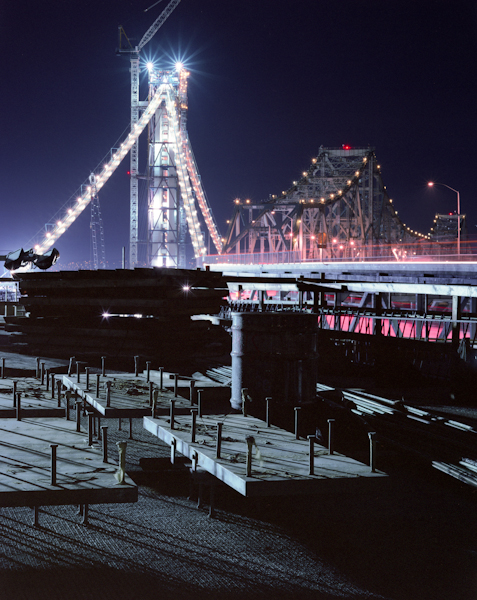 The last shot I did that evening shows the structural bits on the YBI Transition Structure.  It was side lighted by a mercury vapor construction lamp.  Getting all the image in focus was a challenge, as it was even darker than it appears here to the naked eye.  I used a series of flashlights in the image for focusing.  The final exposure was 20 minutes.  At that point, the temperature had dropped to the dew point, making everything dripping wet.  It was time to pack it in.

Every time I shoot on the Bay Bridge, things change.  It gives me virtually unlimited ideas and images to shoot for the couple of days every other month I am out there.  I have been committed to shooting this project for almost 4 years now, and it never ceases to amaze me.