In mid-April, it was time to re-visit the Bay Bridge Eastern Span construction site.  As usual, I spent two afternoon/evenings.  The first night I had the issue of high winds.  Anyone who has shot with a view camera in 30+ mph winds knows how difficult this can be.  The second night added the extra issue of rain.  It’s a challenge keeping water droplets off the lens (which distorts the image) in the long exposures, not to mention the camera and photographer!  We were all thoroughly soaked, but the heavy clouds and reflections made the images have a more interesting dimension. 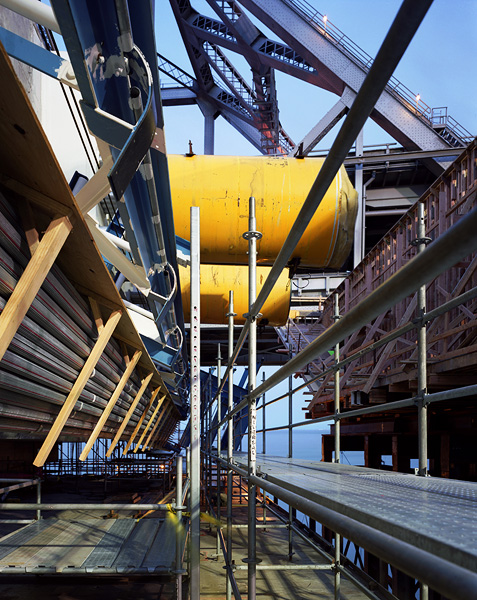 In this view at twilight, I am on the main support structure of west end of Self-Anchored Suspension Span (SAS).  The Yerba Buena Island Transition Structure (YBITS) is on the right and the main suspension cabling is on the left.  This is one of only two major gaps still left in the new bridge.  The existing bridge is in the background.  If you look closely, you can see some yellow caution tape in the foreground.  It is moving so much in the high wind that is becomes invisible except where in connects to the poles. 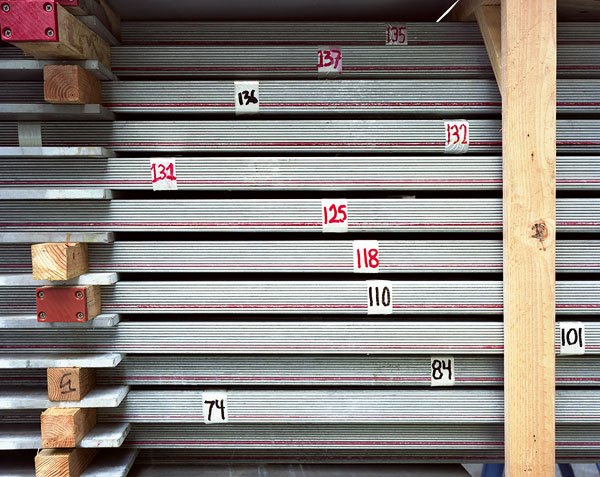 Here is a detail shot of the cabling with the labeled bundles.  There are 137 of these bundles and each bundle has 127 separate wires, each about the diameter of a pencil.  When you think that each wire is over a mile long and do the arithmetic, that works out to over 17,000 miles of wire.  This may look look like a snapshot, but it was difficult to set up and I chose this section since it had the best arrangement of numbering.  The previous shot shows that this is at a 45 degree angle, and that I couldn’t get behind the camera to compose.  It was nearly dark and this exposure is over a minute long.  It was worth doing, as by the next evening, this section was covered up, permanently. 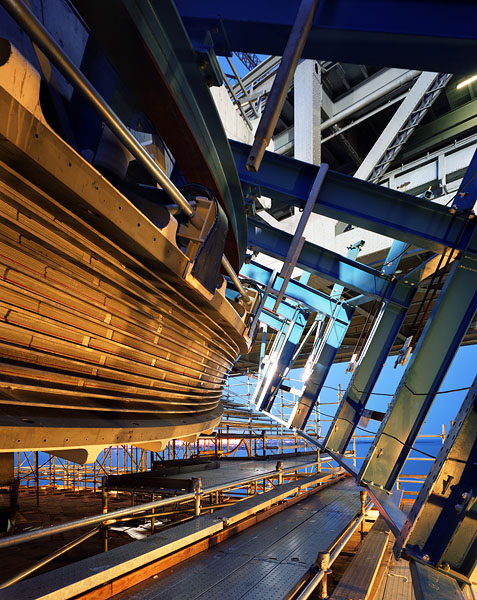 My plan for the prime twilight shot was to re-create an image I did last November before the cables were started.  Here is that image.  This time, I had the additional construction lighting from the Yerba Buena Island Transition Structure (YBITS), that added the warm glow. 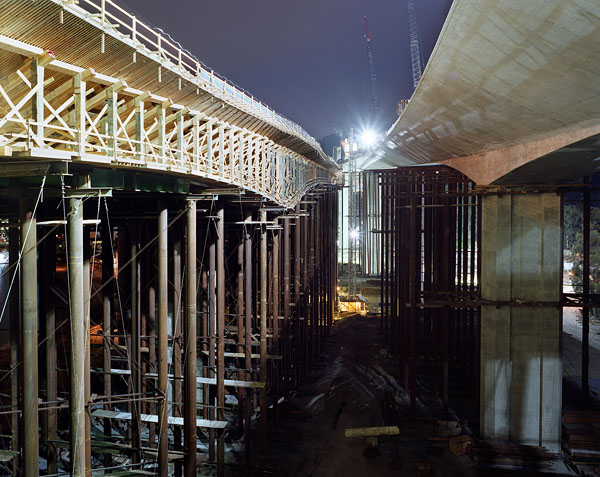 In this view, we are looking at the YBITS construction sections.  This also is a similar view from a November shot, except the section on the right is now completed.  The section on the left was only concrete towers back then.  Here is that view as a vertical.  It shows how quickly the construction progresses in 6 months.  This is a 5 minute exposure. 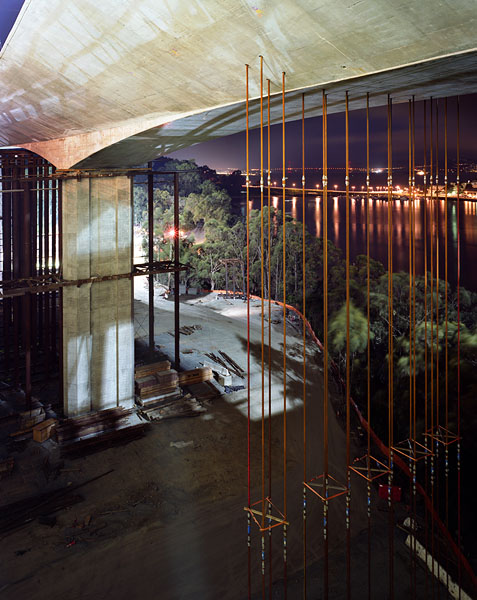 By this time, the wind and cold dampness was getting to us all, but I felt there was one more image to be had that evening as I was scouting during the previous exposure.  This image of the completed westbound section of the YBITS had these (rusty, warm-toned) cables pulling down and loading the end of the bridge.   Note the moving trees in the high winds.  The lights of Treasure Island and the Golden Gate Bridge in the background, and the various construction lights and shadows made for a provocative image.  It was worth the additional 10 minutes to set up to make the single 8 minute exposure, as I feel it was my favorite of the night. 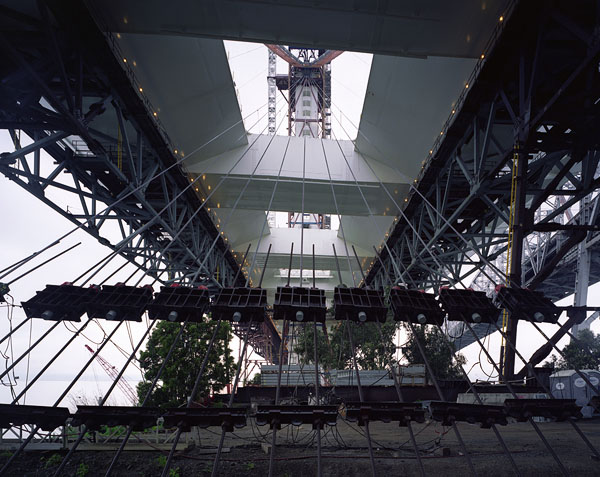 The second night was shot in the rain, so they all have the feeling of twilight shots.  All of the exposures in the rain were at least 30 seconds, even in the afternoon as it was so dark.  Note the construction lights on the bridge catwalks.  Here are 10 cables pulling on the tower itself to compensate for the pulling of the cables.  There was no drooping in these wires!  The escort said they are pulling and moving the top of the tower by about 8 inches.  I aligned this image and it is true and plumb, but as you can see the roadway isn’t.  This part of the bridge makes the subtle but complex bend, turn and decent into the tunnel on Yerba Buena Island. 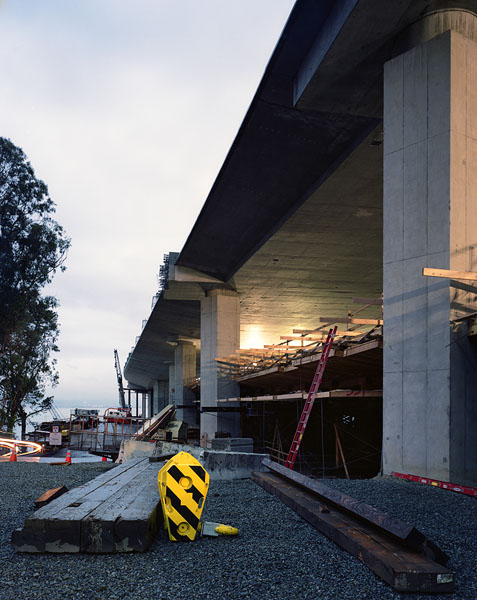 We drove up to where the YBITS section of roadway meets the island.  One of the advantages of shooting in the rain is the saturated colors, as is seen here in the yellow of this crane hook.  We were under an umbrella to make this 2 minute exposure.  Note the vehicle headlights on the left coming up the road. 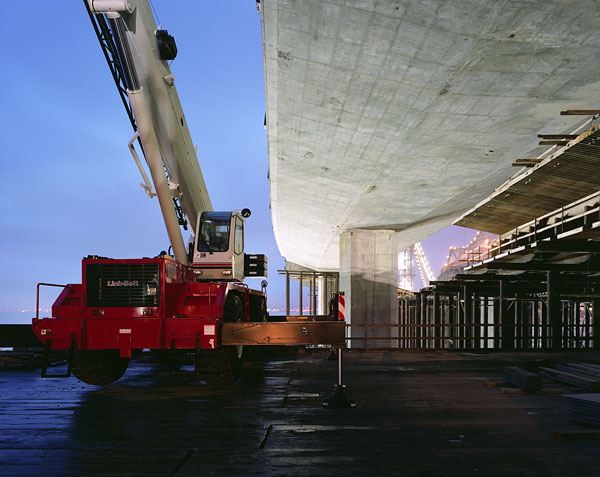 This crane is on the end of a temporary wooden roadway.  The completed westbound YBITS roadway section is sheltering us from most of the rain.  The glow in the bridge is from the glow of many high-intensity construction lamps over 100 feet below.  Note the lit SAS tower and cables right of center. 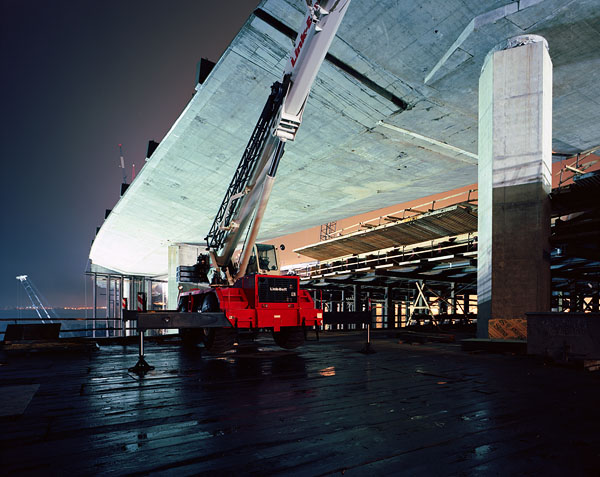 I wanted to do one more shot that night, but the rain became quite heavy.  This shot of that same crane was shot from beneath the huge counter weight of another crane.  This kept some of the rain off, but it was still very wet.  I had to wrap the camera and lens with the darkcloth to keep them from getting totally soaked.  The escort and I were huddled under the span for this 12 minute exposure.  The orange glow seen between the two YBITs roadways are from the rain-scattered sodium vapor lights of the Port of Oakland.

The high humidity (reacting with the sheet film) this evening and the winds the day before made me loose 6 out of 32 views, much more than usual–a sad, but inevitable problem with view cameras in the field in inclement weather.  Unfortunately, many lost were the night images.  Still, I was happy to get what I did.

This series has become quite popular over the past almost 4 years, getting lots of interest.  The upcoming issue of View Camera Magazine will be doing a spread of my work from this Bay Bridge series.  Many thanks to the editor, Steve Simmons, for his enthusiasm and interest.