Last week I went to the Palm Springs Photo Festival and drove the 40 miles out to the Salton Sea to do some scouting.  It had been years since I photographed along its shores and was curious what was left after all the years of the corrosive water, desert heat, strong winds, vandalism and general decay.

The Salton Sea is a flyway for almost 400 species of migrating birds that was created in 1905 by when the Colorado River jumped it banks and flooded the desert floor.  It is the largest lake in California whose surface is 226 feet below sea level and is about 150 miles from LA.  To read more, try this link on the Salton Sea.  There is also a great 6 minute video that talks about the area that is worth watching called The Accidental Sea.

We decided to rendezvous with my Long Beach City College class to explore for a Location Photography class, where we did some portraiture, landscapes and of course, night photography.  Since this blog is about twilight/night work, I will show some images I shot on the scouting evenings.  The weather was in the mid 80s and sunny, making it a pleasure to be out in the desert, especially at night.

I took many scouting shots of the different areas and towns along the lake with a point and shoot camera.  The North Shore area interested me most, so I decided to be there for twilight and stay to shoot at night.

There are both digital and large format 4×5 views and will show a few of each. 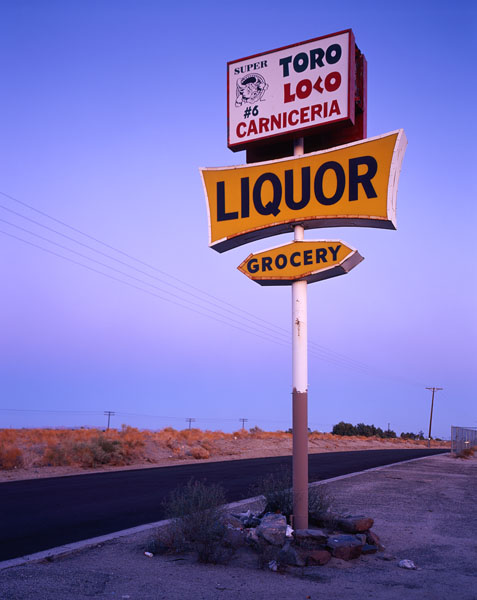 There was an abandoned group of stores, including the ones above, a video store and gas station.  This twilight 4×5 shot is of what is the best preserved of what is left of the stores.  There was no power–no lights–in this area, which is an unusual situation for an urban guy like me. 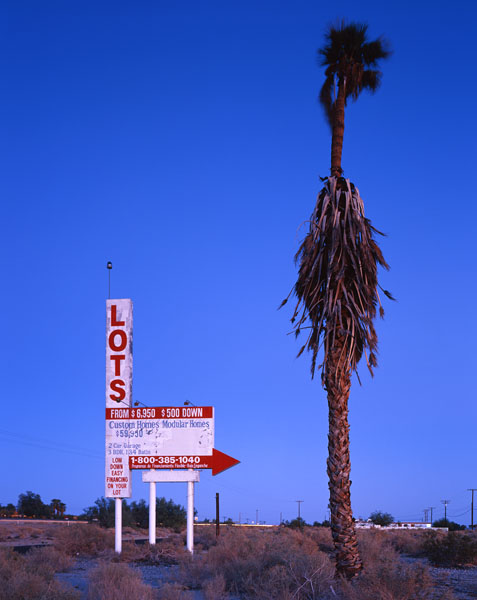 Yes, you, too, can buy a lot here for $6950, but I bet there are built homes for not much more.  It seemed like half of all the homes and businesses around the lake for for sale. 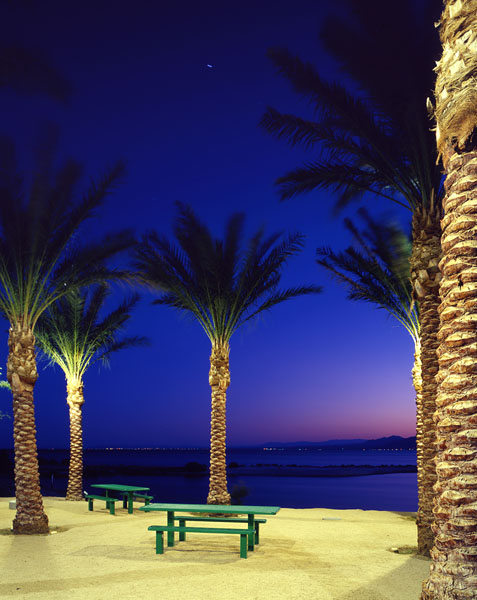 The famed architect Albert Frey designed Salton Sea Yacht Club building which had been abandoned for decades and I had not seen it in about 5 years.  It was in terrible shape, stripped and wrecked by vandals.  Since then, with some federal stimulus money, they restored the building to its former mid-century glory and have turned it into a museum and visitors center.  The above area is a picnic area where the former swimming pool was.  Positioning the 4×5 camera to obscure the lights from flare was a challenge.  The mixed lights with the parking/picnic area lights and blue glow of twilight are pleasing complementary colors.

The side gate to the grounds of the Yacht Club was left unlocked, so I slipped in and did this twilight shot.  I am facing west here to capture the last of the sunset glow.  The mixed light of the warm toned tungsten lights on the palm trees mixed with the cool green mercury vapor lamps is highlighted in this 4×5 view.  The original transparency actually has more vivid colors than what appears here.

The following images were shot with my digital SLR camera.  I was scouting and wanted to see the types of light that was available. 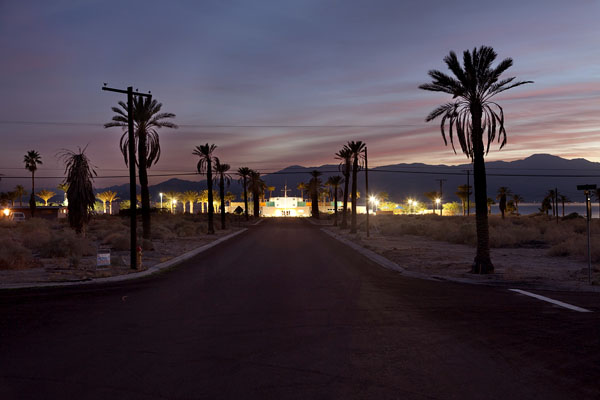 Here you can see the restored Yacht Club, one of the few things that was well lit in the area.  This is a combination of two images combined with layer masking.  One image for the top half and another for the bottom half. 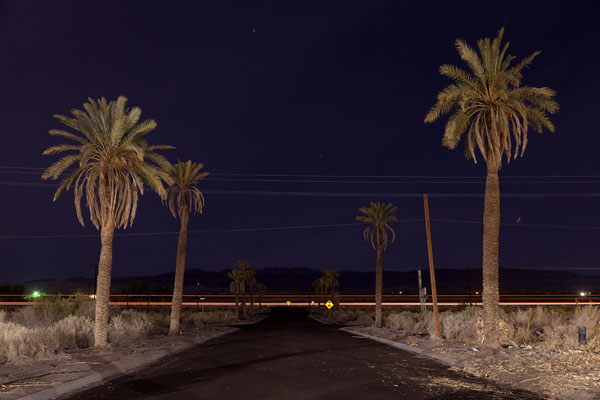 I drove towards the Yacht Club and shot this reverse angle.  It is illuminated by the Yacht Club itself.  This is a 2 minute exposure and shows a lone semi-truck that went by on highway 111. 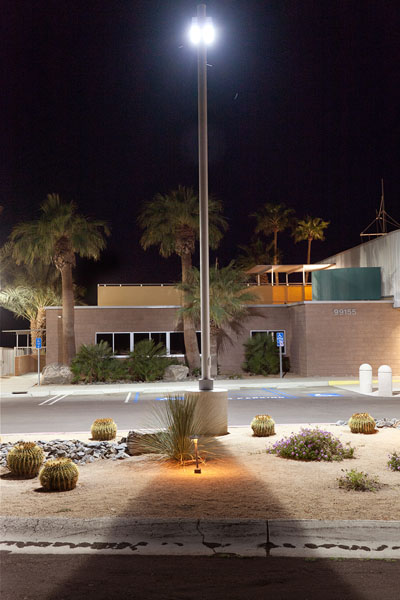 Careful observation of light and what it does is key to interesting night photography.  Here I noticed the parking light fixture casting its own shadow from the pole.  The warmed toned ground lamp fixture in the shadow adds another dimension.  The white marks near the main light are moths darting about. 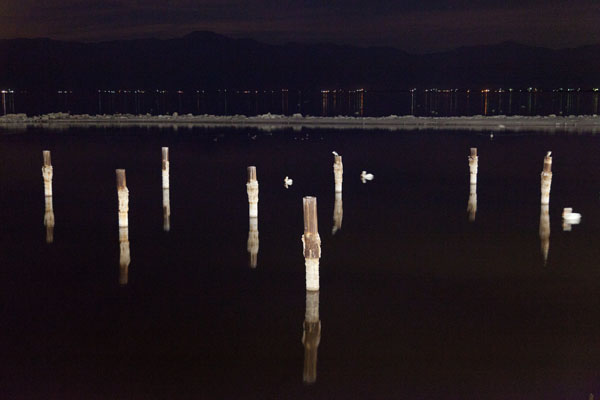 The lights from the Yacht Club spilled onto the old pilings in the marina.  A common technique night photographers use is to boost the ISO of the camera to get a quick shot to check for focus, exposure and composition.  This shot is one second at ISO 6400.  Note the three California White Pelicans on the water.  After checking the histogram, I felt this exposure was a bit dark, too.

I then switched to ISO 100 and did this 4 minute exposure (increasing the exposure a half stop at the same time): 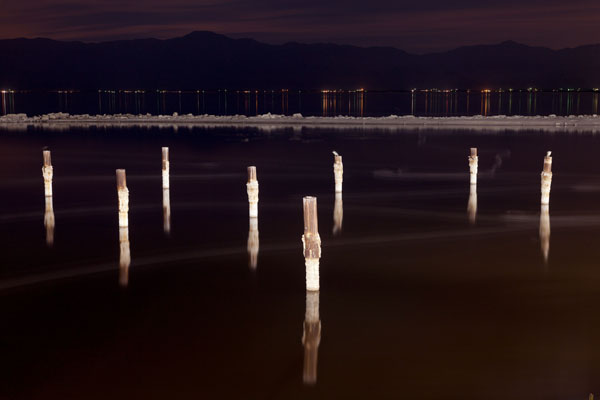 It might be difficult to tell that the ISO 6400 image in these low res files that are too noisy and grainy for an image like this.  The ISO 100 image can make smooth, creamy toned large prints.  Note the white blurs on the water.  This is caused by the pelicans moving about on the water.  The sleeping birds on the pilings barely moved in the 4 minutes.  Note, too that you can now see some detail in the sky because of the increase in exposure.  Typically, I erase these test images as I shoot, but thought it would be a good learning tool to share one. 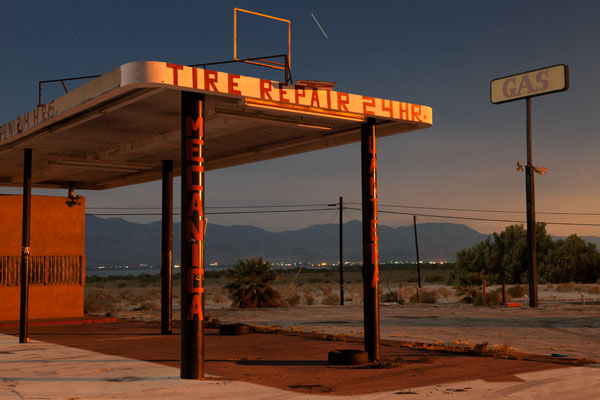 This is an abandoned gas station next to the other closed stores on the north shore.  It is lit from a highway lamp a few hundred yards away and the almost full moon.  It is an 8 minute exposure at f8.

I then did an alternative view with a student’s ultra fast 50mm f1.2 lens, shot wide open: 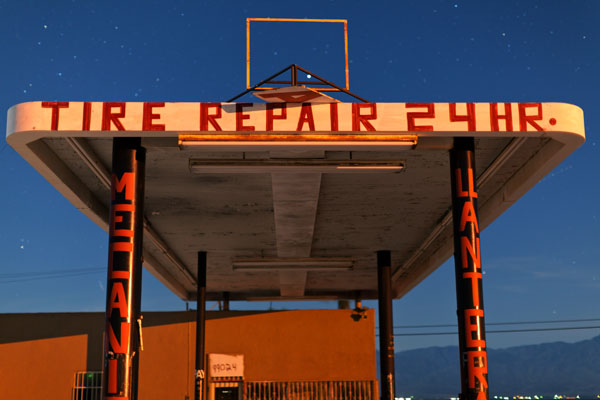 It might be difficult to tell with this low res file, but the only thing in focus in this image is the “Tire Repair 24 Hr.” sign.  Note the fuzzy stars in this 30 second f1.2 (!) night exposure.  Interesting effect, indeed.

I took the slow way back to Palm Springs on old highway 111 to see some of the industrial and agricultural businesses and saw this commercial fuel depot in Indio: 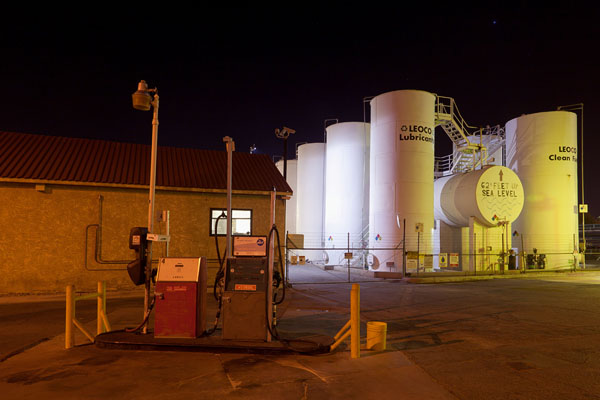 What is interesting is the wild mix of color.  The fuel pumps are lit by a sodium vapor street lamp causing the foreground red glow.  There are some unusual industrial lamps on the tanks. 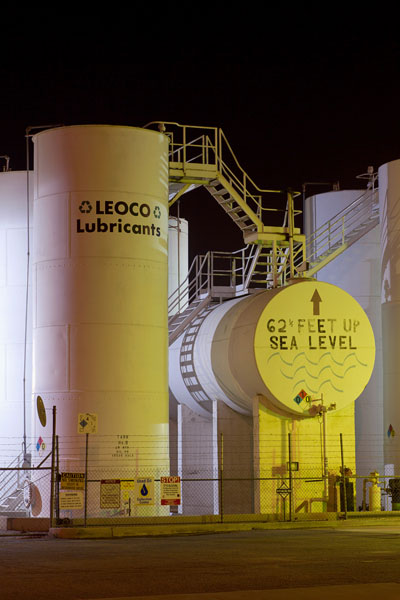 It was the tanks themselves with their shadows and unusual lighting that was the shot.  There was an open gate into the facility, and as I began to stroll in, I was quickly accosted.  The man on duty was just locking up to go home.  I figured if I was there a half hour earlier, I might have been able to get in.  Next time…  Interesting to note that Indio is 62 1/2 feet below sea level.