Back in my January 15th blog post, I showed images shot at a major oil company’s Long Beach fuel dock.  A couple of weeks ago, I got access a second time, but knew I wanted to explore deeper into this vast tank farm rather than to stay on the dock.

This facility is very clean and tidy and a pleasure to walk around in.  This time I brought my hand truck so I could bring in a bit more gear than last time, since we cannot drive in a car.  My escort, Laura, was willing to spend more time with me–almost two precious hours.

On the way in, I wandered a bit by the dock and did the following shot. 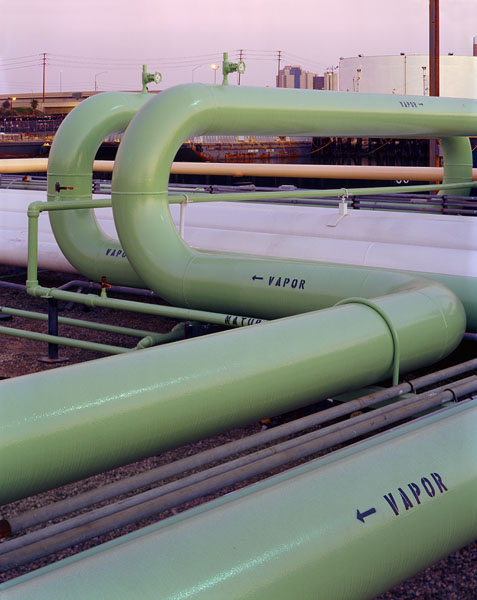 The sun has set with the beginning of that beautiful rosy color in the eastern sky at sunset that I always enjoy here in LA, even when I’m not shooting.  I studied this maze of “vapor pipes” for a couple of minutes before I brought the camera over, looking for the right vantage point and perspective for the image I wanted to make.  I wanted to be sure if this shot was worth doing.  For those technically inclined, I used front tilt on the 4×5 camera to keep the focus from the edge of the foreground pipe to the distant tanks.  This shot would have been better a little later, but I wanted to move on to get some more shots, due to my limited time.

A multi-acre tank farm like this one is just too large to shoot in an evening.  That is why I like to come back regularly to places such as this.  I have tendency to work an area of a  hundred feet at twilight to get a nice cross section of images from the area.  In the following image, I went to a valving area, that I knew would be great at twilight and at night.  I brought my gear over and started to find the next view. 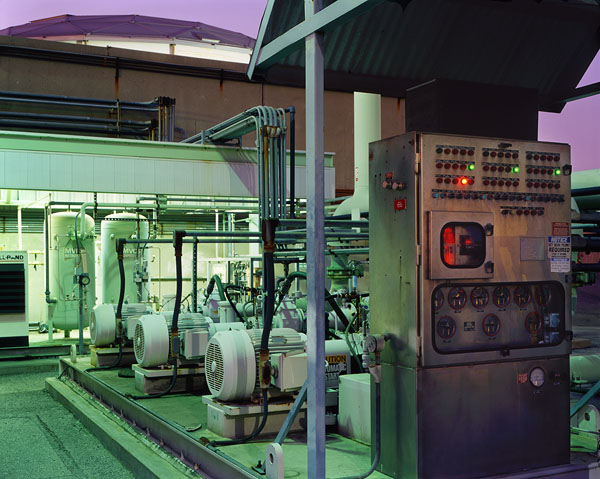 This is a monitoring station with electric pumps in the background.  Overhead mercury vapor lamps are casting the green glow along with some fluorescent tubes in the background.  The stainless steel cabinet is lit by the warm afterglow of the late afternoon light.  During this exposure, I scouted the next few shots, all within 100 feet of this shot.  I find that if you try and shoot all over the yard, you will spend too much time running about and not shooting.  My goal is to become one with the location and really concentrate on the shapes and light.  Since I  have been doing this a long time, I find I will know what the final image will look like–to an extent.  Ansel Adams called this previsualization, and it takes lots of practice and knowledge of your equipment and characteristics of the film and light. 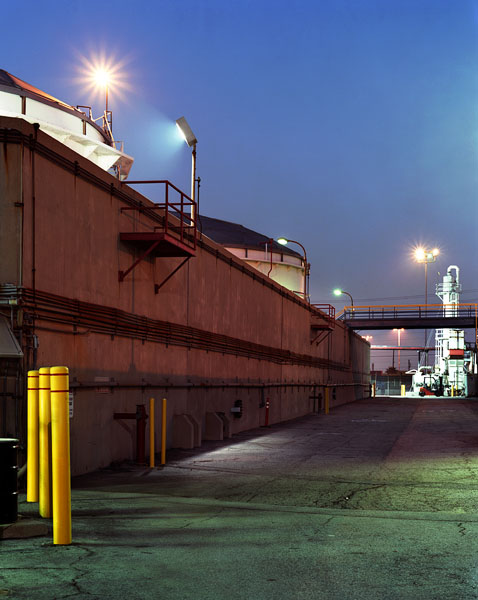 Here we are looking between two tank farm areas.  There is another wall on the right.  The 20 foot high walls are strong enough to withstand a rupture in all the tanks to keep the fuels contained.  The base of the tank farm itself will keep spillage out of the groundwater.  In this shot there is a mixture if three different types of light sources, causing the wall to glow red, the ground to have a green cast and the spillage of light from that intense lamp facing left on the ground, that appears white.  This shot would be impossible if that bright lamp was facing the camera. 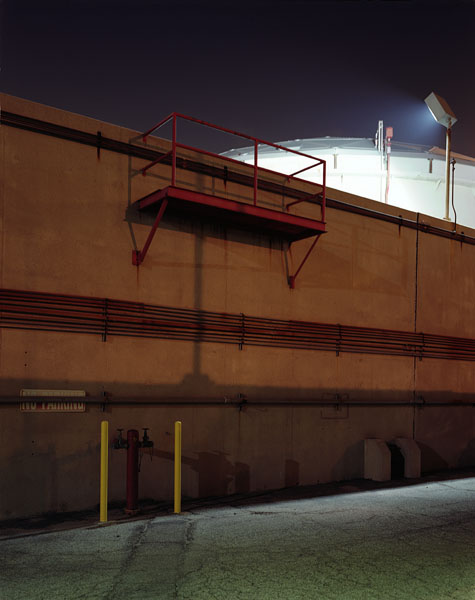 Here is another view of that intensely bright lamp, shot about 30 feet from the shot above.  The twilight is now past and we are into the night.  You can really see the spillage from that lamp on the ground and how it lights up the moisture in the air.  Below is a third variation of this shot. 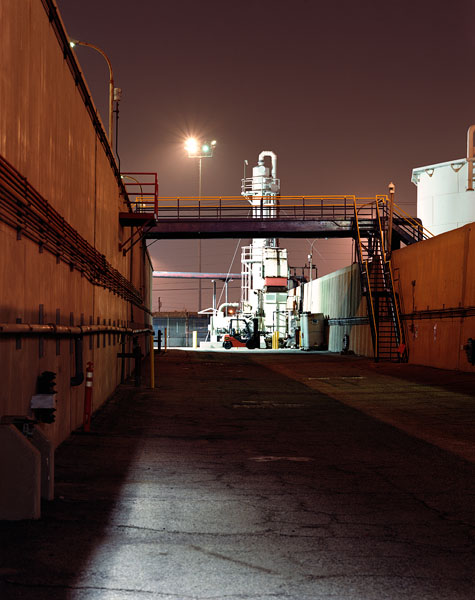 In this view you can see the separation of the two “farms”.  The light on that piece of equipment in the background is the same type and color of lamp as the “spillage” in the foreground.  There is detail on an enlargement of this shot in the bright sections, but limited by what you can see on a monitor at this resolution. 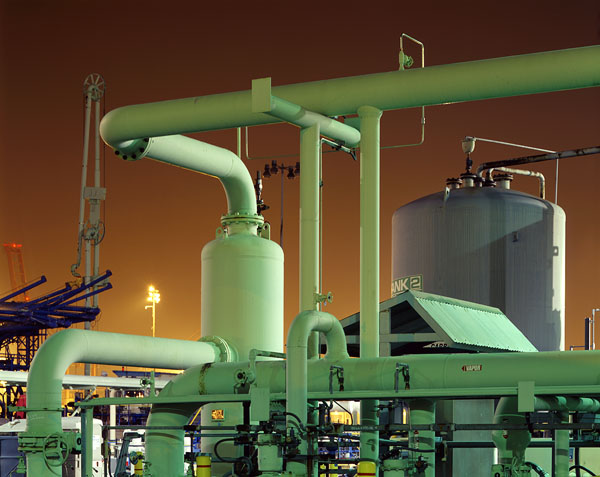 These green vapor pipes made a nice contrast with the orange of the urban-industrial night sky.  For those who are curious, this is a transparency and I used a lot of front rise to eliminate the busyness in the foreground.  Front rise keeps the perspective correct without simply tilting the camera upwards (which would cause “keystoning” or the apparent tilting of the vertical parts).  I would have liked to compose this slightly differently, but had to work hard to hide as many of the bright lights as I could.

On the way out, while walking by the fuel dock again, and noticed that the barges were back again that I shot back in January.  This time I used a shorter exposure, so I (hopefully) could read the names of the barges. 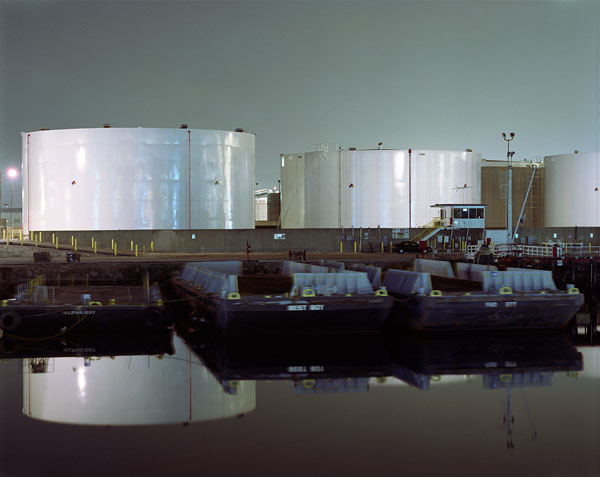 They are barely readable, as Alpha Boy, Best Boy and Bad Boy.  Someone at the barge company has a sense of humor!  This is a different view from the January shot, as there is a marine layer coming in making the sky appear overcast and I used a different film type and lens, but the idea was the same.  This is an example of why it is good to be able to return and reshoot the ‘same’ view, because it will never be the same…